According to a national consumer study by Market Force Information, Nordstrom (NYSE:JWN) is America's favorite fashion retailer by a considerable margin. This is the third consecutive year in which Nordstrom ranks at the top of Market Force Information's ranking, and the results are consistent with data from other sources. Looking at the American Customer Satisfaction Survey, Nordstrom has been ranked as the industry leader for customer satisfaction in each and every year since 1995.

Fashion retail is a notoriously dynamic and aggressively competitive industry, so Nordstrom's ability to consistently outperform the competition in customer satisfaction speaks wonders about the company's competitive strengths and management quality. Nordstrom is clearly doing something right -- actually it's several different things -- to beat the competition. 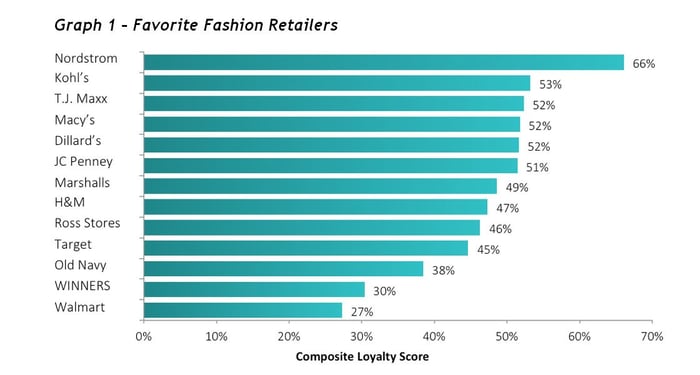 Nordstrom beats the competition by a wide margin when it comes to merchandising, which is obviously a crucial decision factor for customers. Nordstrom has a satisfaction score of 48% in this area, substantially above second-place Dillard's (NYSE:DDS) satisfaction score of 39%. Macy's (NYSE:M) is arguably Nordstrom's closest competitor in this group, but it comes in the fourth position with a score of 37%.

Nordstrom also crushes other fashion retailers in the "just for me" area. It achieved a score of 29%, versus 19% for H&M and 16% for Macy's. Clients don´t only demand high-quality merchandise anymore -- products need to be different and unique, and Nordstrom is smartly benefiting from that trend.

Nordstrom comes in second place behind H&M in environmental consciousness, so the company is still doing quite well on that front. There seems to be some room for improvement in store operations, though. This could be related to variables such as speed of checkout. Nordstrom is renowned for the politeness of its employees, its personalized service, and comfortable atmosphere. It's hard to be both attentive and quick at the same time, so maybe Nordstrom's strength in service quality means a weakness in speed to some degree.

One big difference when it comes to Nordstrom versus the competition is its strong performance across the four areas. The company crushes other industry players in merchandising and "just for me" and it comes in second place in environmental consciousness. Nordstrom's fourth place finish in store operations was the company's weak spot in the survey, but Nordstrom still ranks among the best players in the industry.

On the other hand, Macy's doesn't even crack the top 7 in store operations. TJX's (NYSE:TJX) T.J. Maxx comes at the top of the list in store operations, and it also has a strong position in merchandising and "just for me." However, T.J. Maxx doesn't have as good a reputation for environmental consciousness.

Nordstrom and the e-commerce revolution
In case you haven't heard, Internet and related technologies are having a major disruptive impact across different industries, and fashion retail is no exception to the rule by any means. On the contrary, consumers are increasingly turning online for both searching and buying their favorite items, and the trend will probably continue getting stronger over time.

Market Force looked at e-commerce trends among fashion retailers and Nordstrom, once again, comes at the top of the list. Importantly, the company is the top performing player in all three major areas: use of e-commerce site, satisfaction with the e-commerce experience, and e-commerce purchase decisions. 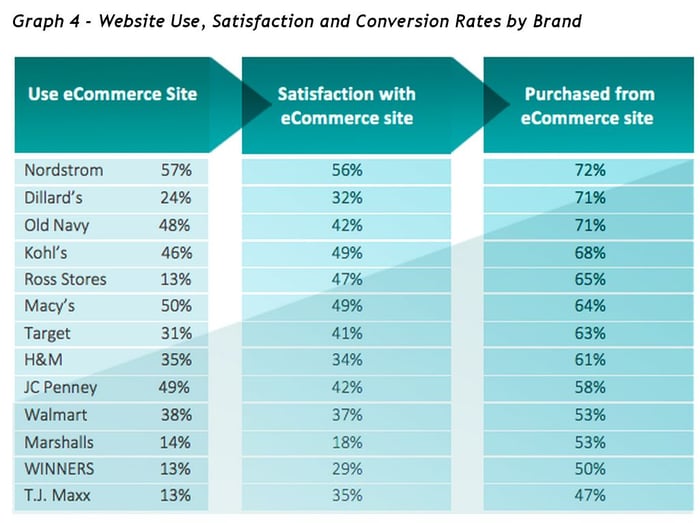 Looking at the company's financial reports, Nordstrom is clearly harvesting big benefits from its leadership in e-commerce. Sales at Nordstrom.com grew 23% year over year to almost $2 billion during the year ended on Jan. 31, 2015. Nearly 21% of Nordstrom brand sales came from the online channel during the year.

Nordstrom's secret sauce is not so secret after all; trends such as product differentiation and e-commerce are widely recognized as major strategies driving growth in the fashion retail industry. However, execution is key, and Nordstrom knows how to deliver in these crucial areas.