Shares of PartnerRe (NYSE: PRE) rose as much as 11% on Tuesday after investment company EXOR announced a $130 per share all-cash acquisition offer that values the reinsurer at $6.4 billion. EXOR is a publicly traded investment company that is controlled by Italy's Agnelli family.

So what
EXOR is acting as a party-crasher, as PartnerRe had announced on Jan. 25 that it would merge with Axis Capital (NYSE:AXS). However, this is the sort of party-crasher existing shareholders ought to welcome with open arms. Indeed, as EXOR points out in its press release, "[EXOR's] proposal represents a 16% premium to the implied value per share of $112.53 for PartnerRe under the AXIS agreement. EXOR's proposal is also 1.13x PartnerRe's diluted tangible book value per share as of December 31, 2014, in contrast to the proposed AXIS transaction which is priced at a discount to PartnerRe's diluted tangible book value per share."

One wonders why shareholders would accept a transaction that is priced at a discount to tangible book value, given that the shares have outperformed the broad market over the past two-plus decades: 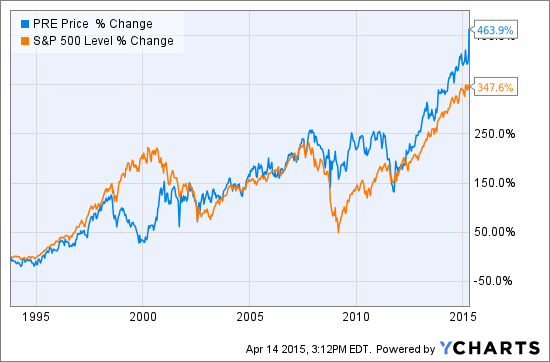 PartnerRe and Axis Capital look to be trying to conclude a deal on the cheap, and EXOR is calling them on it in the shape of an all-cash offer.

Now what
As always, I will recommend investors avoid trying to bet on the completion of an acquisition (that's a professional's game -- there is no edge in it for individual investors). For existing shareholders, EXOR's offer is an improvement over the terms of the AXIS Capital-PartnerRe merger, but it would not be outrageous to demand that EXOR raise it.

Finally, it's interesting to note that EXOR's investment bankers include BDT & Company, the firm founded by Byron Trott, formerly of Goldman Sachs and Warren Buffett's go-to investment banker. Most bankers are transaction-driven, but, having worked with the Oracle of Omaha for many years, Mr. Trott has a good eye for value -- including in this situation, seemingly.