Dollar General's stock has been on a fairly straight growth trajectory, but do coming changes to its business change the investment thesis?

Dollar General (NYSE:DG) hasn't made many missteps since returning to the public markets in 2009, and its stock has rewarded investors by more than tripling in value, a 27% compounded annual rate of return during a period when the S&P 500 hasn't even doubled.

Yet the deep discount retailer is moving into a transition period where it will face not only new and bigger competition, but will do so as it ushers in a new suite of executives that will be tasked with navigating a changed marketplace. Here are a few of the considerations investors need to be mindful of. 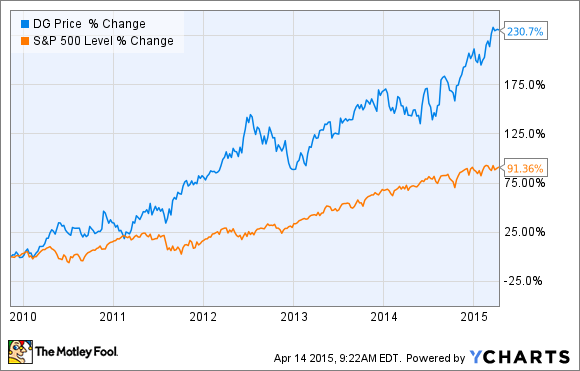 Can it maintain margins?
After peaking in 2013, profit margins at Dollar General have been slowly slipping. Nothing dramatic, but it's an across-the-board loss of power that may continue as it embarks on an aggressive campaign to internally grow since losing out on the acquisition of Family Dollar (NYSE:FDO.DL).

Fortunately for the deep discounter, rival Dollar Tree (NASDAQ:DLTR), which has largely been able to hold firm on its gross and operating margins, won the merger battle and will now need to focus on correcting the faltering business even as it assumes a whole new business model. Family Dollar's own margin strength has virtually evaporated and its lagging performance will undoubtedly drag down its new partner. 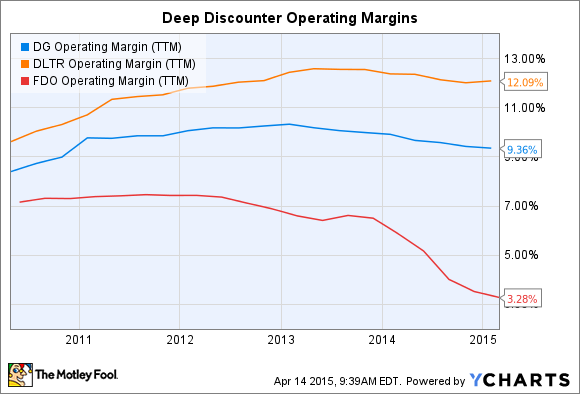 Dollar General should become the new margin leader in the space as a result of the failed acquisition attempt, but that brings up whether it's ready to take on Wal-Mart (NYSE:WMT) as a primary competitor.

Can it beat the King of Retail at its own game?
Wal-Mart has launched it's own accelerated entry into the local deep-discount space by opening hundreds of small-format Neighborhood Markets grocery stores that seek to build on the growth in popularity of convenience stores. With plans to open hundreds more this year, and as Target (NYSE:TGT) also eyes the opportunity with its TargetExpress concept, the competition is intensifying.

Fortunately Dollar General has thus far proved adept at accepting the challenge from Wal-Mart and beating it. Not only are its Dollar General Market grocery stores offering price-sensitive consumers an alternative to shopping at the big box store, but it's doing so at prices lower than what Wal-Mart offers.

The changing of the guard
Arguably the biggest risk Dollar General faces is the C-suite shuffle that's occurring. The on-again, off-again, on-again retirement of CEO Richard Dreiling is the biggest challenge, but its CFO's retirement at the same time puts added strain on whatever new team follows.

Counting their blessings
Investors should be relieved Dollar General has been released from the shackles of purchasing the Family Dollar chain. Although it said it needed to buy the flailing rival to better compete against Wal-Mart, it has probably been saved from the peril of trying to resurrect a damaged business. The fact that the task has fallen to one of its primary rivals is good news.

So what does an investor have to pay to own a deep-discount retailer? According to data from Morningstar, the shares are valued at 18.9 times estimated earnings, a 17% discount to the average multiple for a group of seven comparable companies that include Wal-Mart, Target, the other dollar store chains, and Big Lots (NYSE:BIG).

In fact, Dollar General's forward price-to-earnings multiple is lower than all of them, save one: Big Lots, which trades for 16.3 times estimates and has been trying to engineer its own turnaround. With the S&P 500 itself trading at 18.2 times next 12 months' earnings-per-share estimates, the slight premium to own Dollar General stock is not at all unreasonable. Taking into account the risks and uncertainties it faces, it still looks like an good bet to beat the market -- and its deep discounting peers -- over the next three to five years.