Netflix (NASDAQ:NFLX) shares are about to split, probably in a drastic manner. The company is asking shareholders for permission to go as far as a 30-for-1 share exchange. It sounds very dramatic, but most investors really shouldn't care at all.

What's new?
Netflix just filed a preliminary version of its 2015 proxy statement, asking shareholders to vote on seven proposed actions before the June 9 annual meeting. Among the typical issues, including approving Netflix's chosen auditing firm and reelecting a tranche of directors for the next three years, is a more unusual request straight from the board of directors.

In Proposal Four, Netflix asks for a simple majority vote to approve a vastly expanded reserve of capital stock. This is an important first step toward splitting Netflix shares, which have looked rather pricey in recent years.

The board is currently authorized to issue as many as 160 million common shares. If the fourth proposal is approved, that limit will soar to 5 billion potential certificates.

This move could lead in many directions:

Netflix made no bones about the intended purpose, though. The company said it "does not have any current intention" to explore any of the activities I just listed, other than supporting the share-based compensation strategy that is already in place.

Sure, the board reserved the right to issue additional shares for these purposes at a later date, without asking stockholders for another share count expansion. But there's no reason to expect any of these things to happen anytime soon.

No, this is all about powering "a stock split in the form of a dividend."

Simmer down now
Now, just because Netflix is likely to get its wish doesn't mean you should expect the entire 5 billion shares to hit the market right away.

For example, Netflix doesn't use its entire 160 million share allotment today. The company only has 60 million shares on the market at this time, and could do a simple 2-for-1 split without even asking for shareholder permission.

In fact, it's absolutely normal to have a large reserve of approved but unprinted shares. Netflix said it set the 5 billion share count to be "consistent with the number of shares authorized by other major technology companies."

All of these major tech stocks sit on approved share counts somewhere in the same ZIP code as the proposed Netflix target. They also have the power to execute a modest stock split anytime they like, or to put their share reserves to work in any of the other actions I mentioned earlier.

It's just a nice buffer to have, and I expect the Netflix split to stop far short of the maximal 30-for-1 ratio. Something like a 10-for-1 split would leave plenty of future wiggle room while lowering Netflix's share prices well below the psychological $100 barrier.

What's the big deal?
In most cases, stock splits are nothing but a massive play on investor psychology. Buying 10 Netflix shares at $470 each serves exactly the same purpose as picking up 100 stubs for $47 each. In both cases, you built a $4,700 position with a single commission-spawning transaction.

But a $47 stock certainly looks more affordable than a $470 version, even if all the usual valuation ratios stay unchanged. And the move actually does make a difference every once in a while.

For example, Apple would not be a member of the Dow Jones Industrial Average (DJINDICES:^DJI) today if it hadn't performed a radical stock split first. On the price-weighted Dow, the pre-split Apple ticker would have overshadowed the daily moves of the other 29 members, and the Dow was never meant as a proxy for Apple investments.

Netflix isn't exactly in position to snag a Dow spot anytime soon, but you never know. Extreme share prices can make for some strange and interesting situations. Keeping share prices low (but not too low!) can save Netflix some sweat if the company ever gets close to a Dow Jones seat -- or any other price-based honor that could boost the company's market status.

Finally, the single-share price might matter to very modest investors who could afford a couple of $47 Netflix shares but would have to save their pennies to get a single $470 stub. Options contracts also become more affordable at lower prices, since they often represent 10 or 100 shares each.

So when capital is tight, lower share prices actually matter. From that perspective, stock splits are shareholder-friendly moves. 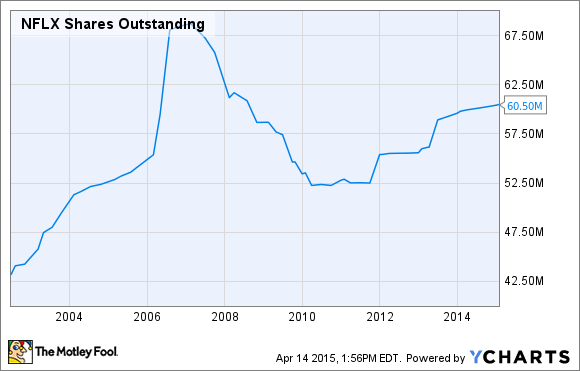 Final words
I expect this proposal to pass, because such plans rarely meet much resistance. Investors tend to like stock splits, and it doesn't hurt to give the company's board and management some extra financial flexibility.

Then, we'll see Netflix pay out a special dividend. For each current share, Netflix owners will receive another four to nine additional shares for a final split ratio between 5-for-1 and 10-for-1.

The move won't change Netflix's total market value. Nor will it affect the direct value of your current Netflix holdings. We'll all get more granular access to the stock. So we can make smaller trades and have more control over the size of our Netflix investments.

This is a fairly nice move with no real downside. But it's also no reason to break out the champagne bottles and order up fireworks.

It's ultimately just another housekeeping item that won't move Netflix stock at all. Or if it does, the change will be based on nothing but day-trader psychology and will fade quickly.

Feel free to buy or sell Netflix shares based on whatever happens in Wednesday afternoon's first-quarter earnings report. But for all intents and purposes, you can ignore the upcoming stock split.