There is plenty of volatility with Internet of Things stocks, particularly ones like Sierra Wireless (NASDAQ:SWIR)which is a pure play for the next big thing in the technology sector.

Sierra investors have been on quite a ride over the past 12 months, with large price swings in both directions. But for patient investors, Sierra still has a promising future.

For those of you who have not been keeping up with Sierra in the past year, here is what things have looked like: 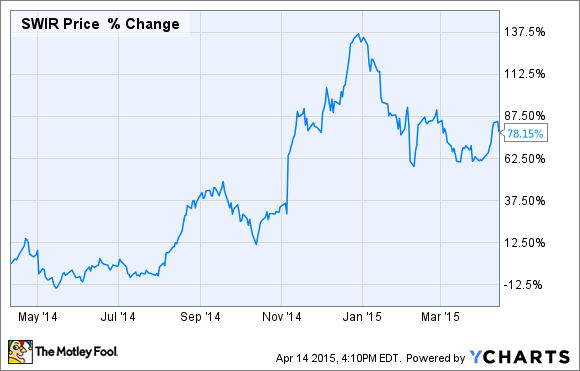 Sure, a nearly 78% gain over 12 months is nothing to sneeze at, but the stock is down over 23% year-to-date. That has left some investors a bit ruffled, and I think the price slip was unwarranted.

In February, the company reported its quarterly earnings, posting earnings per share of $0.29 -- which was at the top end of management guidance and beat Wall Street estimates. On top of that, total revenue hit $149 million, up 25.6% year-over-year.

Even with this good news, investors were concerned about guidance for the next quarter, with earnings per share expected to come in at around $0.15 to $0.18, slightly below what analysts were forecasting.

But for long-term investors, that guidance should not matter much. Instead, Sierra investors should focus on current and future opportunities.

What lies ahead
Specifically, let's take a look at these three key opportunities:

Sierra wireless modules have benefited from each iteration of wireless standards. The company still generates revenue from older 2G connections (albeit less) even while it has transitioned to faster 3G and 4G LTE wireless modules. And that should continue for some time.

While the U.S. has pervasive 4G LTE networks, many areas of the world still do not. So while Sierra is selling 4G LTE wireless modules to some countries now, it still has the potential to see that demand increase. CEO Jason Cohenour said on the February earnings call that, "Our clear leadership position in 3G and 4G is proving beneficial as the market continues to migrate to next generation networks." Cohenour went on to say that at the end of 2014, 3G revenue surpassed 2G, and 4G revenue "is not far behind."

On top of these 4G opportunities, Sierra is also looking at growth in connected cars to fuel future revenue. Last year, the company secured design wins for its wireless modules in connected cars and expects revenue from those wins to materialize this year and into 2016. IHS predicts there will be 152 million connected cars by 2020, up from just 23 million in 2014, which should allow Sierra lots of room to grow in this market.

As if all that were not enough, the recent acquisition of Maingate, which makes machine-to-machine (M2M) connections and offers data management, should help the company stay head of competitors in Europe. The $90 million purchase gave Sierra an additional 500 customers in Europe, with a subscriber base of more than 500,000 connected devices.

That is great news considering European M2M connections are set to explode over the next five years. In 2014, M2M connections comprised just 6.8% of all cellular connections in Europe, but by 2020, they will make up just over 20%. By establishing itself further in Europe through Maingate, Sierra is poised to benefit from all that M2M growth.

Don't expect smooth sailing
Of course, just because there are lots of opportunities still on the horizon for Sierra, that does not mean investors will not see some continued stock volatility. The company is a small-cap with all of its eggs in the Internet of Things basket -- and with that comes some risk.

There are other more balanced approaches to Investing in the Internet of Things, but I do not think investors should count out Sierra just yet. The opportunities I mentioned above should help fuel growth this year and into the near future. And if the company implements these strategies well, patient investors could reap the benefits.