With a market cap of just over $730 billion, Apple (NASDAQ:AAPL) is the most valuable company in history, and the largest component of the S&P 500 by a fairly sizable margin. Apple makes up about 4% of the index -- an historical accomplishment that only a handful of other companies have ever been able to claim.

One of those companies is General Electric (NYSE:GE). In fact, GE -- on a relative basis -- was larger. In the year 2000, GE accounted for nearly 5% of the S&P 500. But the industrial giant took a turn for the worse shortly thereafter, and its stock has been a notable underperformer in the years since. Even factoring in sizable dividend payments, GE shares have fallen more than 13% in the last 15 years. 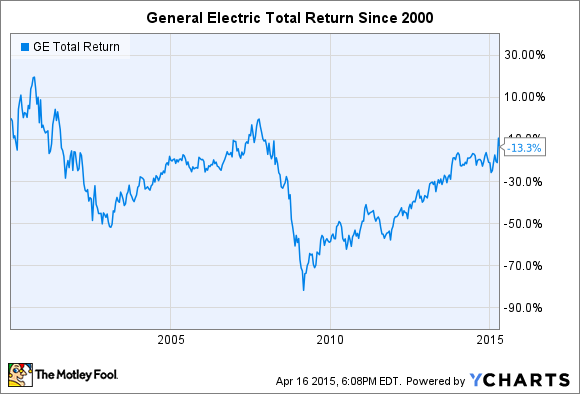 What happened, and should Apple shareholders be concerned by GE's fall?

GE's underperformance is a product of its outperformance
Although GE shares have performed poorly over the last 15 years, they've actually done relatively well over the last 20. Since the beginning of 1995, including dividends, GE has returned more than 450%. 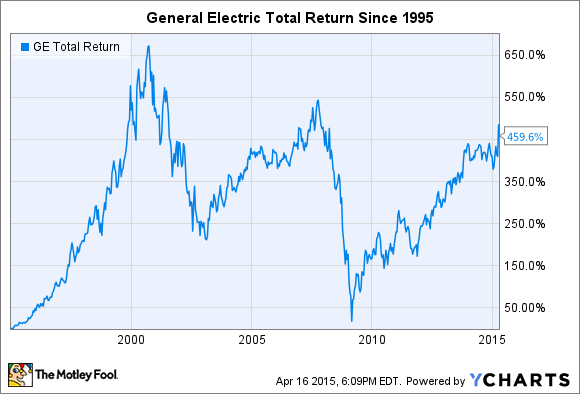 With perhaps the lone exception of Microsoft under Bill Gates, during the second half of the 1990s, GE was the greatest company in the world led by the world's greatest CEO. Despite its already mammoth size, GE was growing revenue and earnings at around 20% annually back then. Jack Welch, its legendary CEO, could do no wrong.

Stocks were hot, and GE was among the hottest. Investors bid up GE's multiple to an absurd 55 times trailing earnings. Everything looks more obvious with the benefit of hindsight, but the idea that one of the world's largest companies could continue to grow its earnings at such a rapid pace appears downright absurd today.

A change in management, and the financial crisis
GE has grown both its revenue and its earnings over the last 15 years, but at an average annual rate of a little more than 1%. Unsurprisingly, GE's multiple has contracted sharply, down to a much more reasonable 18 times trailing earnings.

GE's business has also undergone a number of fundamental shifts and faced fearsome challenges. Welch retired and was replaced by Jeff Immelt. The crisis of 2008 forced the company to temporarily slash its dividend by 68%, and fears of mounting losses at its GE Capital unit cost the company its prized AAA credit rating in 2009.

The largest S&P 500 component has never been a solid bet
Apple is a much different company than GE. GE is often thought of for its jet engines, appliances, and light bulbs, but the GE of the last 15 years was involved in all manner of businesses, including the entertainment industry through its subsidiary NBCUniversal.

Apple, in contrast, sells only a handful of products, and it derives the overwhelming majority of its revenue from a single gadget: the iPhone. It has no massive finance arm -- it's not involved in making mortgages or TV shows.

But GE does provide at least somewhat of a cautionary tale in the sense that, historically, the largest member of the S&P 500 has almost always proven to be a bad bet. Not just GE, but other titans, including IBM and ExxonMobil, severely underperformed the index in the years immediately following their ascent. Last month, bond investor Jeff Gundlach (via Business Insider) observed that, since 1972, the S&P 500's largest member has always underperformed the rest of the index.

That's more of a technical argument than a fundamental one, but there may be an astute observation there: Past a certain point, it becomes difficult for large companies to grow.

Apple could be the first company to defy that trend, but it's something investors should be aware of.