Big pharma has been having a rough go of it since the patent cliff kicked into high gear in 2012. But you wouldn't be able to tell it by how shares of the pharma giant Bristol-Myers Squibb (NYSE:BMY) have been trading.

Specifically, Bristol's shares have now climbed by a stately 33% in the past year alone, crushing the S&P 500 in the process: 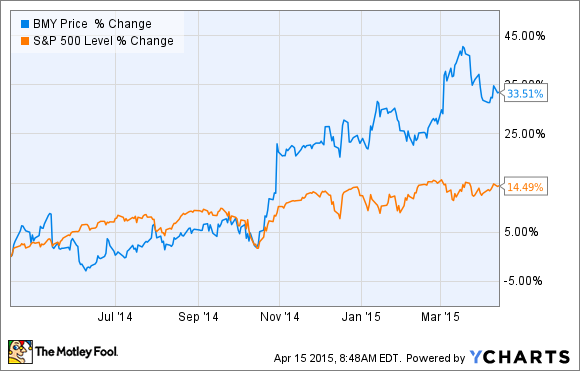 The somewhat baffling part of Bristol's surge, though, is that its underlying business has been struggling due to multiple top-selling drugs losing exclusivity and the company's decision to exit its lucrative diabetes alliance with AstraZeneca (NYSE:AZN). Indeed, the following graph nicely illustrates this marked divergence between Bristol's share price and its revenue stream since 2012: 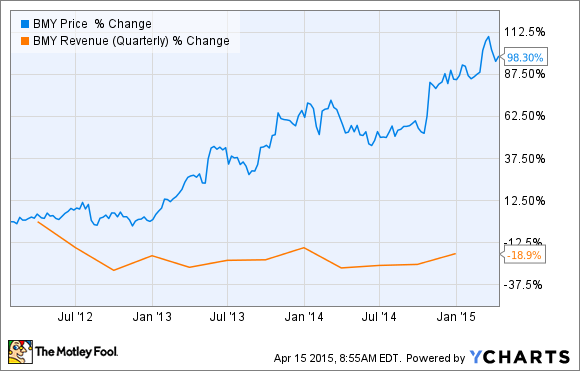 If you subscribe to the efficient market hypothesis, this trend is basically nonsensical for all intensive purposes. But there it is nonetheless.

Although there are a couple of potential explanations for this apparent dichotomy, I think the biggest driver behind Bristol's skyrocketing share price has been the company's decision to become a leader in immuno-oncology.

According to some experts, immuno-therapies might make up more than 60% of all cancer treatments by 2030, suggesting that this market should easily exceed $50 billion in annual sales. That's why Bristol, and nearly every other big pharma, has placed a heavy emphasis on developing their most promising immuno-oncology candidates.

While Bristol has taken a slim lead over Merck in the race to become the market share leader by gaining two regulatory approvals for its PD-1 inhibitor Opdivo, there are some compelling reasons to think that big pharma's outlook for these novel oncology treatments could be all wrong. And that would be a nightmare for Bristol and its shareholders. With that in mind, here is why immuno-oncology may not live up to the hype.

Are immuno-oncology drugs being overhyped?
The first class of immuno-oncology drugs hitting the market right now are known as PD-1 inhibitors, with both Bristol and Merck (the latter with its drug Keytruda) breaking ground with recent regulatory approvals. Across the entire landscape of PD-1 inhibitors under development for a wide diversity of cancers and even blood disorders, analysts are estimating that these drugs should see peak sales of somewhere around $20 to $35 billion, making them the most important players in this growing market space.

The odd part, though, is that PD-1 inhibitors and their related counterparts, PD-L1, might be victims of their own success in some respects. In the pivotal trials for advanced melanoma, both Opdivo and Keytruda showed long-lasting responses for certain patient subtypes that could lead to drastically lower treatment times compared to standard chemotherapies.

What this means is that the average treatment duration for cancer patients may go from months, or years, to a matter of weeks. The key is that patients are only recommended to receive these new drugs until their cancer stops progressing. And some of the clinical trial data suggests that the best responders may only need about 16 weeks of therapy.

In addition, a fair number of patients in these various clinical trials didn't show any meaningful clinical benefit from either Opdivo or Keytruda. So, the picture that's starting to emerge is that some patients respond extremely well to PD-1 inhibitors, whereas others, maybe even the majority, simply aren't good candidates for this new class of drugs.

The current peak sales estimates are nonetheless assuming a year's worth of treatment at a $150,000 per patient across a diverse population. Perhaps a more realistic view, however, is that these drugs will end up being used for about four months at tops, at which point they would either have worked or are not going to work. This shortened treatment duration would be great news for patients, but it would also result in a dramatic reduction in the drugs' real world commercial performance.

Are Bristol's shares overvalued?
Bristol's shares are currently trading at a forward price-to-earnings ratio of nearly 30, well above the sector average and all of its big pharma peers. In short, the market is baking in a huge premium because of Opdivo's potential.

While I firmly believe that Opdivo will be a megablockbuster, the issues highlighted above suggest that the drug may not go on to reach superstar status. And that spells trouble for Bristol's lofty valuation.

Although I might turn out to be incorrect, the Street's love affair with immuno-oncology in general looks, to me, to be wildly out of line with the clinical data that's come out so far. These drugs are going to be game-changing therapies for a select group of patients, but not the aspirin of cancer medicines. And if Opdivo fails to live up to these expectations, Bristol's shares could be set to nosedive.