As the Federal Reserve gears up -- albeit extremely cautiously -- to begin raising interest rates for the first time in over a decade, investors are naturally apprehensive about the possible knock-on effects of a new interest rate cycle. In that context, there is no shortage of opinions on what will happen to interest rates and how investors should react to (or anticipate) these changes. Not all of that information is correct, so we asked our analysts to identify pervasive interest rate myths. Here are three:

Alex Dumortier: A rising interest rate cycle spells doom for stocks. I'm not sure where that myth originated -- perhaps from the notion that rising rates create a headwind with regard to economic activity -- but the historical data simply doesn't bear it out (as my Foolish colleague Morgan Housel pointed out in The Wall Street Journal at the end of last year.) As the following graph illustrates, stocks rose during the last three cycles of rate hikes (December 2003 to July 2007, June 1999 to July 2000 and December 1993 to April 1995): 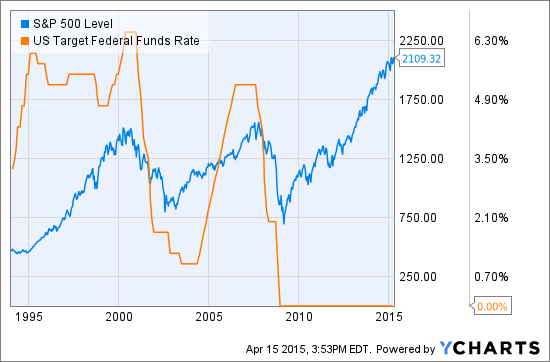 On the other hand, history provides only a limited basis for comparison with our current circumstances. With the Fed Funds rate having been in a rock-bottom range of 0% to 0.25% for nearly six-and-a-half years (not to mention the Federal Reserve's vastly expanded balance sheet), we're in uncharted waters.

Will rising rates hurt stocks this time around? No one knows the answer to that question, but I expect most of you will be investing in equities through several more interest rate cycles and, assuming you're a net buyers of stock, lower prices ought to be welcome.

Dan Caplinger: One mistake that many U.S. investors make is to consider the bond market and interest rates purely from a domestic perspective. With Treasury yields at historically low levels, it's easy for a U.S.-focused investor to conclude that interest rates will have to move up dramatically in order to revert to more normal levels.

When you take foreign bond markets and interest rates into account, though, the picture changes dramatically. As low as rates in the U.S. are, the interest rates you'll find on similar government bonds throughout much of Europe and in Japan are even lower. For instance, in Japan, 10-year bonds carry interest rates of just 0.35%. European rates are even lower in some cases, with Germany offering euro-denominated bonds for just 0.16% and Swiss government bonds actually having a negative interest rate of -0.14%. Even weaker economies like Italy, Spain, and Portugal sport lower bond yields than the U.S. right now, demonstrating the relative value of U.S. bonds.

As a consequence, foreign investors might well see U.S. Treasuries as a smart bet compared to their local alternatives, and that could help shore up bond prices and keep rates from rising. Without looking at the global picture, however, making erroneous conclusions becomes a much more dangerous risk.

Jordan Wathen: It's widely believed that the Fed's rate hike will greatly affect borrowing rates, particularly for long-term loans like mortgages. But this is really just a myth, as the Fed has indicated it intends to raise short-term rates, not necessarily long-term rates -- the rates that affect things like mortgages and corporate bonds.

In the summer of 2013, the Federal Reserve hinted that it would start cutting back on quantitative easing, ultimately ending its monthly purchases of long-dated U.S. Treasuries and mortgage-backed securities. Rates rocketed higher for a short period. The 10-year bond briefly hit 3%, a yield not seen in years. But then market forces came back into play. Banks, loaded with cheap deposits, starting snapping up U.S. Treasuries in droves, purchasing more U.S. Treasury bonds in the fourth quarter of 2013 and the first quarter of 2014 than they had in prior periods. The 10-year yield quickly fell, and it hasn't seen 3% since. In fact, the 10-year yield spent most of the first quarter of 2015 under 2%!

I bring this up because it's important to understand that the Fed has the capacity to raise rates on the short-end of the yield curve. But with inflation as low as it is (expectations for 2015 are just 0.6-0.8%), there is little incentive for long-term debt investors to back off the beefier yields on the long end of the curve. Thus, I wouldn't expect an increase on the short end of the yield curve to have an immediate effect on long-term rates like the 10-year U.S. Treasury, which is the "benchmark" for everything from corporate bonds to fixed-rate mortgages.