There aren't many better bellwethers of the manufacturing environment than Illinois Tool Works (NYSE:ITW), and if its recent results were anything to go by, the sector is set for a tough ride, for the next few quarters at least. A combination of a strong dollar, the impact of falling oil prices, and weakness in some heavy engineering end markets such as mining, defense, and shipping are all holding back growth. With that said, let's take a deeper look at the results and how Illinois Tool Works is dealing with a difficult environment.

Despite beating its own guidance for EPS in the quarter, management's downgrade to full-year EPS and organic revenue (that is, growth from existing business) seemed to hurt investor sentiment.

The reason for the downgrades? According to the results presentation, the EPS downgrade was due to currency effects, and the organic revenue growth downgrade is down to a "more challenging capital spending environment."

In a sense, readers shouldn't be surprised, because other industrial companies have been saying the same thing. For example, earlier in earnings season MSC Industrial Direct (NYSE:MSM) gave a disappointing earnings report, with management stating that sales "dropped significantly" in February and remained soft in March.

Now the good news
While the spending environment remains "challenging," Illinois Tool Works has been successfully increasing operating margin across all its segments.

The margin expansion goes a long way toward explaining how management expects EPS to rise 9.2% in 2015 (assuming the midpoint of full-year guidance) when total revenue is expected to fall by 5%-6% in the same period.

Segmental analysis
A breakout of 2014 operating income by segment reveals the relative importance of each segment. 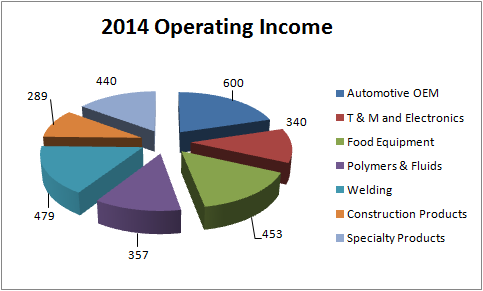 Its most important segment, Automotive OEM, saw organic revenue growth of 7%, with management outlining that worldwide industry auto builds grew only 1%, indicating significant outperformance by Illinois Tool Works. However, Welding segment revenue fell 7% (with an organic decline of 3%), as the decline in oil and gas-related end markets hit the company hard. In fact, excluding oil and gas-related sales, organic sales rose around 3%.

The takeaway
In short, the company is doing well in the automotive sector and is seeing some stronger conditions in areas such as construction and food equipment in North America. Meanwhile, its more cyclical areas -- more susceptible to capital spending cuts -- are weaker. The difficulties in the oil and gas sector are well documented, as is the impact of a stronger U.S. dollar. There is little that management can do about these issues.

On a more positive note, companies will surely get used to a stronger U.S. dollar in time, and currencies can and will fluctuate. Even the U.S dollar will. Meanwhile, weaker oil prices will hurt industries with direct exposure, but at some point, lower energy prices could spur increased capital spending in other industries. The good news is that the company's ongoing margin expansion is putting it in a good position, should its end markets improve.