What: Shares of offshore transportation and service provider GulfMark Offshore, (NYSE: GLF) were hammered on April 21, down more than 15% by the end of trading after a steady decline all day: 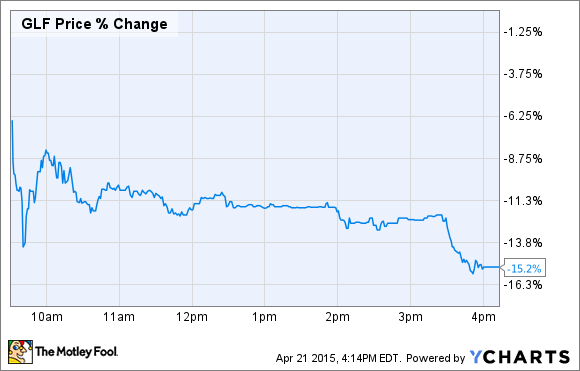 So what: The company reported first-quarter earnings after market close on April 20, and clearly the market wasn't happy. Revenue actually came in on the high end of the company's guidance, and expenses came in near the low end, resulting in a slightly narrower loss than was expected. However, management guided revenue projections for next quarter down, and that was a big reason the stock sold off today.

Now what: GulfMark provides transportation services for offshore oil and gas rig owners and operators, and this industry is deep in the midst of troubling times as oil prices have fallen 50% since June. Offshore oil is some of the most expensive to develop, and producers are delaying the most expensive projects until oil prices increase the payback on these big investments.

The impact on GulfMark's term contract business happens later in the downturn, as existing contracts for well development must be met by producers, but as the backlog of business ends, there won't be as much business to replace it. For GulfMark, the hardest days could be ahead. In the meantime, management is working to "rightsize" its fleet and staffing levels, but it's just not clear how severe the downturn will be in offshore, or when it will rebound.

For now I think investors are better waiting for signs of a recovery, versus speculating on a market bottom that may not be as close as we want.