BHP Billiton Limited (ADR) (NYSE:BHP) is one of the world's largest miners and has a hefty dividend of around 5.3%. And while it's wildly diversified, that doesn't mean it's risk-free. Here are three key issues you should be watching.

The biggest cut of all
The first thing you'll want to take note of with BHP is that it's in the process of spinning off its smaller operations as South32. This, however, should make the company stronger because its core operations of iron ore, copper, metallurgical coal, and oil have historically had higher margins than the businesses it's shedding (these core businesses had an EBIT margin of 48% versus 41% for BHP as a whole). But, this all speaks to a risk you do need to watch closely: a shift to cost cutting.

At one point, BHP and other miners could almost spend money with abandon because commodity prices were high. That's not the case today, and it hasn't been for a while. To be fair, BHP has weathered the commodity downturn quite well, remaining profitable throughout. But part of that is because of reduced spending. For example, by fiscal 2014, it had reduced its capital spending by 40% from 2012 levels. And it's looking for another 17% reduction in fiscal 2015, with another 14% on tap for 2016. The South32 spin-off is part of this, since it will help push costs even lower. 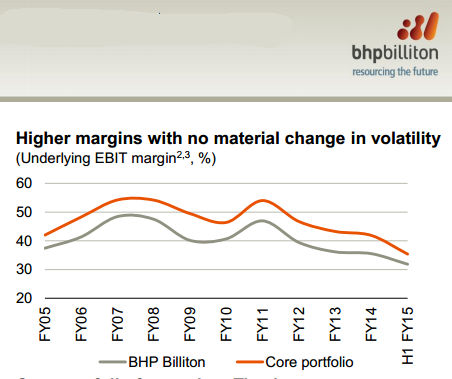 So far, the spending cuts haven't hurt BHP. In fact, production was up roughly 9% year over year in the first half of the company's current fiscal year. But at some point, cost-cutting and production could collide with further cuts, actually resulting in falling production. So, you should be happy with current performance, but keep a wary eye on cost cuts. There's always a risk that BHP starts to cut into bone.

Commodities matter a LOT
It may seem obvious today, but one of the biggest risks BHP faces is commodity prices. Just a few years ago, however, investors seemed to forget this, pricing BHP's shares at over $100. Back then, Asian growth was driving commodity prices higher and, well, in typical fashion, euphoric investors appeared to think the sky was the limit.

After the commodity bust, we know that's not the case. Today, BHP shares trade hands at around $45 a share. But, this risk is also an opportunity today. That's because commodity prices tend to move in cycles. With prices low, now could be a good time to buy into this mining giant -- before prices take off again. That said, remember that what goes up also goes down in the commodity world. 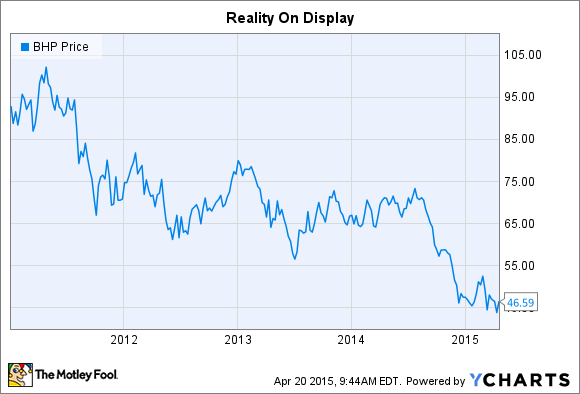 China, China, China
Commodity price risk brings us to the last risk you'll want to watch closely: China. The commodity price bubble was driven by demand from this Asian giant. It started to deflate when too much supply came on. But now, China's growth is starting to ebb. For example, gross domestic product (GDP) growth was 7.4% last year, but fell to 7% in the first quarter.

How big an issue is this? Sales to China accounted for roughly 35% of BHP's fiscal 2014 revenues. That will likely increase after the South32 spin-off. No wonder the giant miner's earnings in fiscal 2014 were roughly 40% lower then they were in fiscal 2011. But China's growth has been trending lower since 2010, according to the World Bank, with the pace picking up in the last couple of years.

If China continues to slow down, BHP could see demand from a key market soften further. That could put downward pressure on commodity markets and keep BHP's results relatively weak for longer. That said, there are other Asian countries driving demand, including fellow emerging giant India. So, there are offsetting markets, but even if others start to pick up China's slack, be sure to keep a close eye on what is easily BHP's largest customer.

A good company in a bad market
BHP is a well-run company and has weathered tough seas well. There's upside potential, but there are also risks you need to be sure to watch. Commodity prices are the most obvious risk, but counting on one country for 35% of your sales is pretty big, too. Until these two issues turn positive, in some fashion, BHP is likely to face choppy water. And while cost-cutting has been a benefit during the commodity price downturn, you'll want to make sure it doesn't turn into a negative.