This year, the chipmaker is expected to launch Skylake, which in Intel-speak is a "tock" -- or a significantly enhanced architecture. With Broadwell, the "tick" to the Haswell "tock," Intel says it delivered a roughly 5.5% improvement in performance-per-clock. Skylake should be an even bigger boost over Haswell than Broadwell was.

At any rate, while I expect Intel has done something great with Skylake, I think expectations are being set unreasonably high thanks to some speculation in the press.

WCCFtech recently published an article speculating that since Intel is being unusually guarded with details surrounding the Skylake processor core, it is planning something "big" and "disruptive" with the design. The article goes so far as to suggest a technology known as MorphCore (detailed in a 2012 research paper here).

The paper was written by researchers at The University of Texas at Austin, (the now-defunct) Calxeda, and Intel Labs. According to the paper, MorphCore takes a "large out-of-order core" and "adds the capability of in-order [simultaneous multithreading]" to exploit highly parallel code.

In other words, if I understand this paper correctly, MorphCore can "switch" between two modes to achieve the "best of both worlds." For workloads that require very high per-core performance, that "large, out-of-order core" will do well.

Then, when the CPU is confronted with workloads in which throughput is more important than latency, the chip can be "reconfigured" as a "highly threaded in-order core." The paper says that, for programs that can take advantage of multiple cores at a time, the chip running in "in-order" mode is more efficient.

Over at 3DCenter, one user spotted the following Skylake result in the Geekbench database:

The benchmark recognizes the Skylake processor as a "4 core, 8 thread" chip, which is an obvious clue that MorphCore isn't implemented (since MorphCore would "morph" the CPU into a very highly threaded CPU). The next clue is the multicore score. 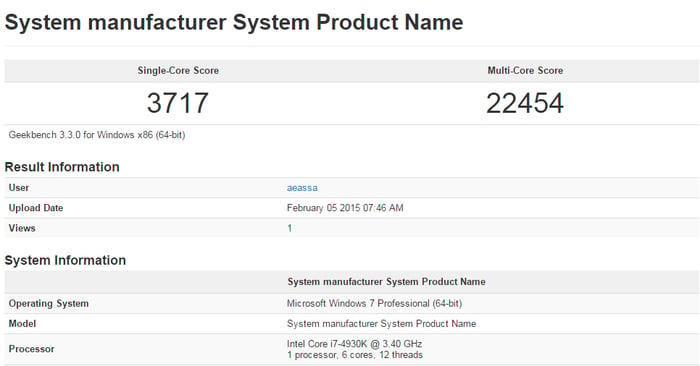 The multicore score is just over six times the single-core score, which is about the same level of scaling in the quad-core Skylake chip in this test. And I can tell you my Ivy Bridge chip doesn't implement MorphCore.

More unreasonable expectations
OK, so Skylake doesn't implement MorphCore. How about the claim from WCCFtech that Skylake will be "big," "disruptive," and, more important, "not be another Haswell."

Frankly, I don't buy that, either.

First of all, the implication here is that Intel phoned it in with Haswell and didn't bring significant changes to the table. While per-core, per-clock performance went up "only" about 10% or so, there was a lot under the hood required to make that happen.

This isn't the place to talk about all of the enhancements and changes that Intel brought to Haswell from Sandy Bridge/Ivy Bridge, but they were substantial. If you're interested in diving in deeper, I suggest reading microprocessor expert David Kanter's excellent write-up on Real World Tech.

I expect that Intel's chip teams will have made substantial improvements with Skylake, but don't expect those improvements to translate into a substantially larger performance improvement over Broadwell than what Haswell brought over Ivy Bridge.