Online marketplace eBay Inc (NASDAQ:EBAY) reported earnings Wednesday, beating out estimates on both the top and bottom lines. But with a corporate shake-up unlike any it's ever seen before on the horizon, will 2015 be nice to eBay Inc stock? Here's what you need to know.

On the bottom line, eBay managed to exceed earnings estimates. The company notched adjusted earnings per share (EPS) of $0.77, $0.07 above both expectations and Q1 2014's EPS.

But as eBay prepares to spin off PayPal -- a service that enables people to pay, send money, and accept payments without revealing their financial details -- in Q3,, investors care less about overall numbers and more about its Marketplace digits -- what you and I know as eBay.com. Revenues for this business, specifically, fell 4% to $2.07 billion, although exchange rate adjustments put that number back in the black at 3% growth.

Quarterly results for competitor Amazon.com (NASDAQ:AMZN) don't come in until after market close today, but for comparison's sake, Amazon.com expects its own revenue growth to clock in between 6% and 16%. That beats out eBay numbers even by Amazon.com's lowest estimate. But in true Amazon.com growth style, analysts expect negative $0.12 EPS, a substantial drop from the year-ago quarter's positive $0.23 EPS. For a company with proven profitability, it looks as if eBay will likely continue to deliver more.

For PayPal, Q1 2015 customer counts send a fairly positive signal. Global active accounts increased 11% to 165 million, but that's the lowest rate of any in the last year. Luckily, those who use eBay are using it more. The net number of payments topped 1 billion for the second quarter in a row, clocking in at respectable 1.04 billion for 24% growth.

But for eBay's marketplace, the market's not so hot. Global active buyers increased 8% year-over-year to 157 million, well below the growth rates of 11% to 14% over the previous five quarters. Nine percent year-over-year growth in sold items was also modest when compared to 11.4% growth in Q1 2014.

For shareholders, specifically, eBay has been working hard over the past year to live up to its fiduciary duty. It spent around $1.3 billion buying back shares and last September announced plans to spin off its PayPal business into a separate publicly traded company.

The company was already facing some problems. Search traffic diminished when Google revamped an algorithm, and a data breach required all eBay users to change their passwords. The market responded sharply, knocking around 15% off eBay's share price in less than a month as investors worried whether the move signaled the beginning of the end for this online auctioneer. But share prices have slowly returned, and year-long returns now hover alongside the S&P 500's(SNPINDEX:^GSPC). 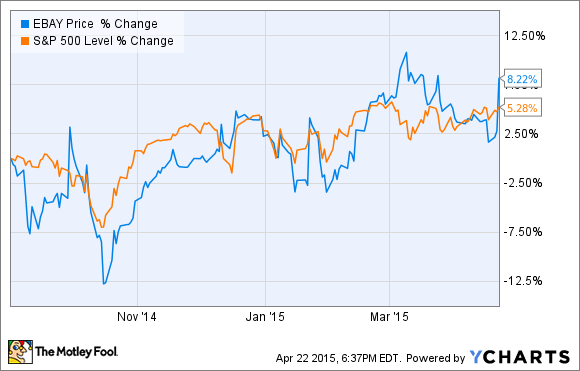 The future of eBay
Looking ahead, eBay has a big year in store (pun intended). It's exploring selling or spinning off its lackluster sales support Enterprise unit, PayPal is expected to go independently public in the third quarter, and CEO John Donahoe plans to step down when the spinoff is done after more than seven years on the job. In fiscal 2015, the company expects an overall 3% to 5% sales increase and 3% to 7% EPS growth.

For eBay shareholders, 2015 marks the beginning of an entirely new investment. The corporation is shaking things up, but it's doing so in an effort to return value to investors and set itself up for a longer-term successful financial future. Investors should reevaluate their theses accordingly, but now could be the beginning of an exciting new chapter in eBay's book.