Title insurer First American Financial (NYSE:FAF) reported earnings before the bell on Thursday, beating the consensus analyst estimate on the back of higher refinance volume. The company earned $37.6 million in the first quarter, or $0.34 per diluted share. The consensus estimate was for earnings of $0.31 per share.

The company's core title insurance business led its quarterly results. Revenue for the segment jumped 10% year over year on top of a 2.2 percentage point increase in pre-tax margin. This was somewhat expected. Management revealed during its fourth-quarter conference call on Feb. 12 that refinance activity was particularly strong in January, with open orders rising 27% over the prior year. 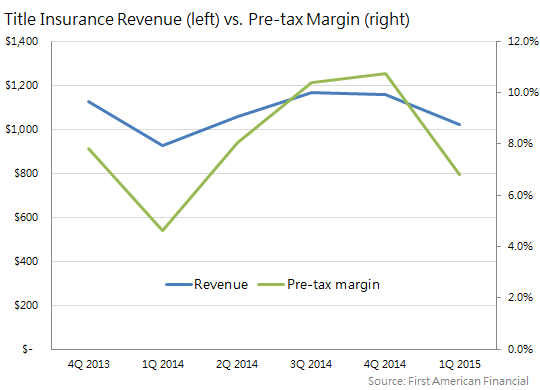 It's notable that refinance volume as a percentage of closed orders per day jumped to 54% of residential orders, compared to 43% in the same quarter last year.

Refinance volume isn't as lucrative as purchase orders ($880 in average revenue per order for refinances vs. $1,921 for purchases during the first quarter), but it does provide a nice lift to the business when rates fall and individuals refinance in response.

One would naturally assume the seemingly endless well of refinance volume will eventually run dry as most homeowners who can refinance have probably already done so. The Mortgage Bankers Association's Refinance Index is well off its local peak in January 2015.

First American's specialty insurance segment remains a small but growing driver of revenue and earnings. Though revenue fell roughly 1% sequentially, it was up 8.5% year over year to $94.5 million, driving a 23.7% year-over-year increase in income before taxes. Pre-tax margin was once again a key player in its performance, expanding by 2.2 percentage points to 18.2% during the quarter.

In an upbeat projection for the second quarter, CEO Dennis Gilmore said he is "encouraged that purchase transactions gained momentum throughout the quarter as we moved into the spring selling season." Separately, the National Association of Realtors reported that existing home sales rose to a seasonally adjusted pace of 5.19 million homes in March, up from 4.7 million homes in March 2014.