Please ensure Javascript is enabled for purposes of website accessibility
Log In Help Join The Motley Fool
Free Article Join Over 1 Million Premium Members And Get More In-Depth Stock Guidance and Research
By Courtney Carlsen - Updated May 3, 2021 at 10:25AM

The industry veteran's investments in technology are paying off.

First American Financial is a 132-year-old financial services company with a primary focus in real estate. Specifically, the company provides title insurance and other closing products for commercial and residential real estate transactions.

In the past decade, the company has reinvented itself by investing heavily in technology and automating much of the closing process. The transformation has been impressive, to say the least, and has been a key driver of growth.

The company recently announced its first-quarter earnings, which showed strong growth. But that's not the only thing the company has going for it. With a price-to-earnings (P/E) ratio of 8.5 and a dividend yield of 2.8% at Monday morning's prices, it's a solid value stock and dividend stock, too. These advantages coupled with a history of steady earnings growth make First American Financial a company worth looking at more closely. 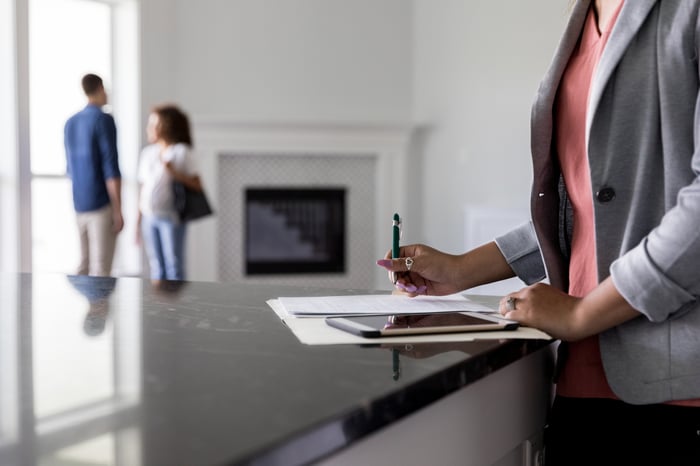 Title insurance offers real estate buyers and mortgage lenders protection against defects in a property's title -- meaning a wide range of unpleasant surprises including back taxes, liens, and even title forgeries. Unlike other types of insurance, title insurance covers problems that already existed at the time the policy took effect, rather than issues that come up later. For this reason, title insurers will take due diligence to ensure a property is free of any issues.

As a result, title insurers tend to see fewer claims on policies but higher expenses related to underwriting, searching, and examining titles. Because the process can be cumbersome, First American Financial seeks to automate a large chunk of it.

First American Financial has invested heavily in technology to automate the title and closing process, eliminating much of the manual data entry. The company's technology captures 60% of this data through automated processes. Its refinancing business has been the biggest beneficiary, with 96% of its refinancing transactions run through the automated underwriting engine and half of those orders fully automated.

Last year, the company launched a product called ClarityFirst, a platform that streamlines the closing process for commercial real estate transactions. This platform has helped the company facilitate over 60,000 commercial transactions since last June.

The company has also invested $70 million in Endpoint, a digital start-up launched in the Seattle area in 2019, which emerged from a collaborative effort with BCG Digital Ventures, the venture capital arm of Boston Consulting Group. Endpoint uses a digital platform to create a better, simplified real estate closing experience for customers. It has captured a 2% market share in Seattle, exceeding management's expectations and leading to the expansion of the product into six new markets, including locations in California and Arizona. It plans to be in 20 markets by year's end.

The company's investment in technology has paid off. In its Q1 earnings, it reported strong growth in its title insurance and services segment, with revenues up 45% from last year to $1.9 billion. This strong growth was boosted by direct title orders closed, which increased premiums and escrow fees. In the past 10 years, the company has grown revenues in this segment at a steady 6.3% compound annual growth rate (CAGR).

In addition, its growth has been steady across different products. Real estate purchase revenues were up 27% during the period. Refinancing revenues were solid too, up 79% from last year but on a similar level as the fourth quarter. This is to be expected as refinancing levels hit record levels last year that will be hard to repeat this year.

The Mortgage Bankers Association predicts a record year for purchase transactions, which are expected to grow 16.4% to a record volume of $1.67 trillion. While refinancing originations are expected to drop 14%, expected volumes of $3.28 trillion would still be the third highest volume on record. Strong originations should serve as another tailwind, setting the company up for a strong 2021.

Finally, its commercial revenues were up 2% from last year to $163 million, with several large transactions closed at quarter's end, leaving management optimistic about the strength of the commercial real estate environment.

While First American Financial may not be well known by investors, it should be. It has been around the block a time or two, and this domain expertise has helped it when it comes to investing in cutting-edge technology in its industry. The company's history of steady revenue growth, a modest P/E ratio of 8.5, and a solid dividend yield of 2.8% make this an attractive stock worth further consideration.