Please ensure Javascript is enabled for purposes of website accessibility
Log In Help Join The Motley Fool
Free Article Join Over 1 Million Premium Members And Get More In-Depth Stock Guidance and Research
By Rich Duprey - Apr 23, 2015 at 9:03AM

Having to fight another battle on yet another front could prove too much for the burger chain.

McDonald's (MCD -0.94%) is having a hard time tamping down all the fires that are erupting around it. The latest flare-up has to do with chicken and it could be a big deal.

From changing consumer tastes and falling sales to rising commodity costs and franchisees balking at the expensive, new ordering kiosks the burger joint wants installed to chase fast-casual customers, McDonald's is busier than a one-armed juggler trying to keep all his balls in the air.

So far the ideas it has thrown against the wall haven't made a difference, and same-store sales are falling month after month except when McDonald's is giving away its coffee for free (who would've guessed?). 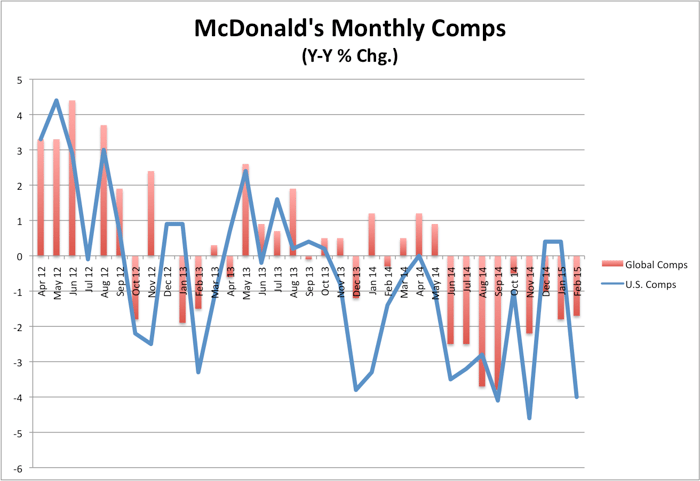 The downturn in sales has been one long, slow slog. Data: McDonald's Corp.

Where's the beef?
Despite having just introduced a pricey new sirloin burger, the rising cost of beef is a particularly thorny issue for McDonald's as well as rivals Burger King and Wendy's(WEN 1.53%), which have opted to emphasize chicken on their menus as a lower-cost alternative.

Burger King's parent, Restaurant Brands International, brought back the eatery's popular chicken fries for a limited time and earlier this year was pushing a 10-chicken-nugget promo for just $1.49, or $0.15 a nugget. Wendy's, meanwhile, is rolling out a spicy chicken sandwich this month.

Chipotle Mexican Grill is also feeling pressured by record-high beef prices; for all its vaunted talk of "food with integrity," it has started sourcing conventionally ranched beef to help offset the cost and might have to hike prices this summer if the increases don't abate.

Ruffling some feathers
McDonald's recently announced it would begin a new menu sourcing initiative in which within two years all the chicken on the menu at all 14,000 U.S. restaurants would be from birds raised without human-used antibiotics. (Farmers that supply McDonald's with chicken will still be able to "responsibly use ionophores, a type of antibiotic not used for humans that helps keep chickens healthy," according to the company.)

Anything that might cause chicken prices to go up would be a dangerous development for all fast-food chains, but none more so than McDonald's because of its precarious position. And that final nail might soon be hammered home into the burger chain's coffin.

According to the Agriculture Department's chief veterinary officer, what could be a "devastating" strain of the H5N2 avian flu virus is hitting U.S. poultry farms, and it could be a problem farmers are dealing with for several years. Countries including Japan, the Philippines, Taiwan, Singapore, and Nicaragua have already restricted the import of U.S. poultry in response to the situation.

The USDA believes the avian flu virus may spread from turkeys to the nation's broiler industry. Image: Wikimedia Commons.

Authorities have confirmed avian flu outbreaks at nearly 40 commercial poultry farms in the Midwest, including 26 in Minnesota. While almost all of them have been confined to turkey farms for the moment -- one chicken farm has sustained an outbreak -- the migratory patterns of the wild ducks suspected of carrying the virus are expected to bring it to the East Coast, where much of the country's broiler chicken farms are located.

Avian flu is highly contagious, and an entire flock can become infected very quickly. The H5N2 strain has been discovered in eastern Ontario -- several farms in British Columbia were hit late last year by the virus -- causing the broiler chicken industry to brace for the worst. The USDA expects the current flare-up will die down in short order, but anticipates it will hit hard again in the fall when the ducks fly south for the winter.

Flying the coop
The broiler industry is heavily concentrated in the Carolinas, Delaware, Georgia, Maryland, and Virginia. Tyson Foods is the country's largest poultry producer and a major supplier of chicken to fast-food restaurants such as Yum! Brands' (YUM 0.07%)KFC chain and McDonald's.

Its stock tumbled last month after a case of avian flu was diagnosed in its home state of Arkansas, and though no cases have been found yet at its farms, or at those of No. 2 producer Pilgrim's Pride(PPC 0.63%), the threat remains ever-present. If the USDA's fears for later this year are borne out, no chicken producer might be safe from the virus's effects. And the collateral damage would apply more so to McDonald's than to its rivals because anything that drove more customers out of its restaurants would indeed be devastating.

The burger joint has the look of a company operating with one foot in the grave. Keeping its restless franchisees in line while trying to remake the business into a "a modern, progressive burger company," as McDonald's CEO Steve Easterbrook terms it, is difficult enough. Having an avian flu outbreak decimate chicken flocks and raise costs could just nail the coffin shut on its recovery.