Google (NASDAQ:GOOG)(NASDAQ:GOOGL) may have missed estimates on both the top and bottom lines today, but the market doesn't seem to mind. After rising 1.4% in Thursday's regular session, shares of the search giant climbed another 3.5% in after-hours trading after it announced first-quarter results.

But Google is about much more than just revenue and earnings, which is why I suggested four things to watch going into the report. Here's what Google had to say:

On currency headwinds: More of the same
First, nearly 58% of Google's revenue came from overseas in Q1, up from 56% last quarter, and including $1.77 billion from the U.K. alone. Unsurprisingly, then, foreign exchange headwinds continued to negatively affect Google's top line.

In fact, excluding gains of $311 million related to Google's foreign exchange risk-management program, Google's revenue in the first quarter would have been $795 million higher had exchange rates remained constant during the last year. On a constant-currency basis, Google's year-over-year revenue growth was a much more palatable 17%.

Though such wide currency fluctuations are an unavoidable challenge of running such a massive business on a global scale, investors should be encouraged that, when you cut through the noise, Google is still technically growing at a respectable pace.

Google's core ad business: Strength and (surprising) new color
Next, Google's advertising business comprised 89.9% of total revenue, at $15.51 billion, up from 89.2% last quarter and 88.9% in last year's Q3. That included a 14% increase, to $11.93 billion, from Google's sites, and a more modest 1% rise, to $3.58 billion, from Google Network Members' websites. Aggregate paid clicks rose 13%, driven by a 25% increase at Google websites, which was partially offset by a 12% decline from Network partners.

Meanwhile, aggregate cost-per-click -- which measures how much Google makes per advertisement -- fell 7% year over year, compared to a year-over-year decline of 3% last quarter. To blame was a wider 13% drop in cost-per-click from Google websites, offset, in part, by a 2% increase from Network partner sites: 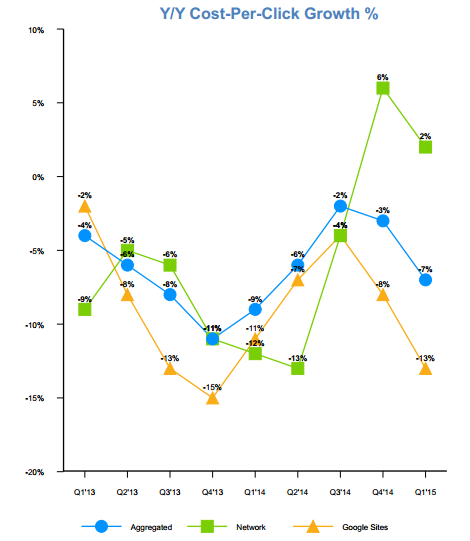 While that accelerated decline might seem like a bad thing, CFO Patrick Pichette also added some unusual color during the subsequent conference call on Google's sites costs-per-click. Specifically, he stated:

Many commentators are incorrectly assuming that the growth trends in our Sites clicks and CPCs are primarily due to difficulties monetizing search on Mobile. But that's in fact not the case. [...] Over the past year, we've seen YouTube viewership climb dramatically, [...] and quality improvements in TrueView ads mean that more users are choosing not to skip them, increasing the overall ad view. So this means that there is much higher volume of TrueView ads being seen, which has been a significant driver of year-over-year growth [...]. TrueView ads currently monetize at lower rates than ad clicks on Google.com.

But as you know, video ads generally reach people earlier in the purchase funnel, so across the industry tend to have a very different pricing profile than they would have on a typical performance search ad. Excluding the impact of YouTube TrueView ads, growth in Sites clicks would be lower -- but still positive -- and our CPCs would be healthy and growing year over year.

In short, Google's costs-per-click declines aren't telling the whole story. With this new YouTube TrueView information in mind, it appears Google's advertising business is as strong as ever.

On "Other" revenue
Next, revenue from Google's "Other" segment grew 23% year over year, to $1.75 billion. According to Pichette in the conference call, this was driven, as usual, by growth from Google Play store sales, and offset once again by declines in its Nexus tablet line and foreign exchange headwinds. While Google's good "Other" revenue continues to outpace the company's overall growth, Pichette unfortunately didn't offer further explanation on whether last quarter's Nexus 6 smartphone inventory bottleneck has been effectively resolved.

On cash flow and investing for growth
Google's net cash from operations climbed 50.6% year over year, to $6.62 billion. After it spent $2.93 billion on capital expenditures, free cash flow grew 80% from the same year-ago period, to $3.69 billion. Again, these capital expenditures are split between real estate investments, production equipment, and data center construction to support Google's ability to grow from an ever-increasing base.

Finally, Google's operating expenses were $6.46 billion, or around 37% of revenue. That's up from 35% this time last year, and roughly flat as a percentage of revenue from last quarter. Much of these expenses are allocated to support Google's lofty R&D ambitions, innovation, and invest in "moonshot" initiatives with the promise of potentially massive future revenue streams.

Despite its quarterly miss on both the top and bottom lines, Google's long-term mind-set and the relative health of its underlying business are truly impressive. As a result, I'm not the least bit surprised the market is bidding up shares on Thursday.