The state of California has instituted water controls at an alarming pace, realizing its long drought could get much worse before it gets better. That's why it is looking at everything it can to help keep the water flowing, including technology with which one water specialist has decades of experience. This could be the time for Consolidated Water Co. Ltd. (NASDAQ: CWCO) to shine.

How bad is it?
In the middle of April, 99.86% of California was experiencing some form of drought. In fact, roughly 93% of the state was in severe, extreme, or exceptional drought. That's why Gov. Jerry Brown instituted mandatory water restrictions for the first time in California history. But that's not all California has been up to: it is also looking to gain control over groundwater rights that once rested with landowners. 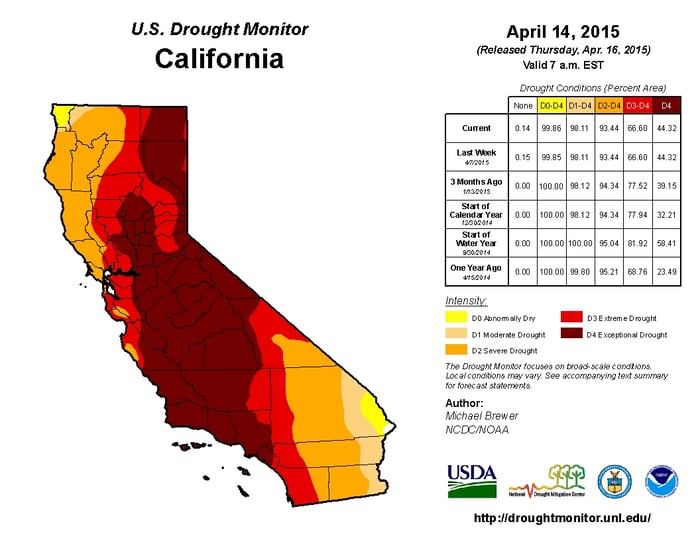 But you can save all the water you want, it won't make more appear. It will just make what you have last longer. That's where Consolidated Water comes in. This water utility started life as Cayman Water in 1973, and today essentially provides all of the piped drinking water on Grand Cayman. The vast majority of its business is selling drinking water, in bulk, to government owned distributors. The technology it uses to do this is called seawater reverse osmosis -- it is turning saltwater into drinking water.

Consolidated's first plant opened in 1989, so it has more than two decades' worth of experience in the art of turning seawater into potable water. The technology is amazing, but historically it has been expensive and consumed a large amount of energy. There have been major advances, to be sure, but it isn't something you'd want to use in places with plenty of clean water. But that is not the case in California, where the drought threatens to turn this vital farm region from water independent to water dependent.

Growing the business
Consolidated is using its Caribbean roots to expand abroad into Asia. It is building a plant in Bali, Indonesia. That's exciting, since it extends the company's reach into a key global growth region, and on Bali it serves a key tourist region. That makes this expansion very similar to its core business in the Caribbean.

Even more interesting is the plant it is building in Baja California, Mexico. It isn't up and running yet, but it puts the company within striking distance of California. In fact, while the plant is intended to serve Mexico, a key piece of the plan is to build a water pipeline to the California border. That would allow it to sell drinking water in bulk to utilities on the other side.

The future is the opportunity
That said, this one plant will process just 100 million gallons of seawater a day. That might sound like a lot, but it's not even a drop in the bucket of what California consumes. But that's not the point here. Consolidated Water is positioning itself to become a key supplier to water-constrained regions throughout the world -- and that includes California. If it can prove its technology and know-how in Mexico, projects in California could be in the offing. 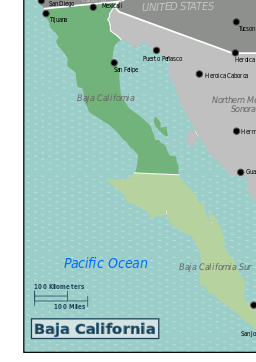 (On the Boarder Source: Ypsilon, via Wikimedia Commons)

Consolidated isn't exactly a low-risk play, however. For example, revenue and earnings took a notable hit during and shortly after the 2007-2009 recession. Revenue hit $66 million in 2008 and then fell to $51 million by 2010, while earnings went from $0.50 per share to $0.42 over that span. That shouldn't be surprising since its main base of operations is in tourist regions.

While Consolidated appeared to get back on track in 2010, with revenue again hitting $66 million by last year, earnings have fallen in each of the last two years. But that's largely because of the nearly $7 million the company invested in the Baja desalination plants. That facility, though, is a growth initiative that should pay handsome dividends down the line. In fact, the company calls it the most important investment since a key new plant in 2005, at which time Consolidated's annual revenue stood at just $26 million.

But that's just the start, because California is only one of the many places on Earth where drinking water is hard to find. One of Consolidated Water's talking points is that only 3% of the Earth's water is potable, and more than half of that is locked in the polar ice caps. That's a sobering fact. And another scary talking point is that nearly 20% of the world's population, roughly one billion people, lack access to safe drinking water. That's a pretty big market, since most of those people are likely in emerging market countries still building out their infrastructure. Like, perhaps, Asia, where Consolidated is already desalinating water in Bali.

If you are willing to take on the risk of Consolidated's growth spending, you'll be rewarded with a yield of about 2.5%. So you'll get paid at least a little something to wait for the North American water project to come online. That plant, in turn, could be the gateway to the United States for this desalination specialist. But don't forget that it also has its fingers in Asia, where spending will likely be driven more by the growing wealth of emerging societies than the escalating risk of drought in mature ones.

Consolidated's desalination expertise is already making water available in the world's water-starved regions, soon to include California. But that know-how has the potential to push growth at this small water company into high gear. Indeed, the California drought could be just the tip of the iceberg of this opportunity in an increasingly water-hungry world.

Can this Company Help Save California From its Water Crisis? @themotleyfool #stocks $CWCO Next Article
Current