What makes a company socially responsible?

There are many reasons companies can be considered "socially responsible," including:

What kind of stocks do well during a market crash?
There are a few things to look for when choosing stocks for a market crash. For starters, stocks with strong dividend histories tend to do well, as the dividend can help to create a "price floor." Dividend payers also tend to be less volatile stocks than most.

Also look for companies with little or no debt. When things go bad and earnings drop, debt payments can begin to overwhelm a company and eat up all of its profits.

Most importantly, look for companies that have a distinct advantage that will help them not only survive, but thrive during bad times. For example, Wal-Mart's (NYSE:WMT) ability to undercut its competitors actually attracts more customers when people are forced to cut back.

Three great examples
So now that we've seen what makes a company socially responsible and able to withstand a market crash, let's look at a few examples and discuss why each one falls into both categories.

1. Google (NASDAQ:GOOG) (NASDAQ:GOOGL)Google is one of the most socially responsible companies in the world, and for several reasons. A leader in work-life balance, Google is consistently ranked among the top places to work in the U.S. with unmatched employee benefits and some of the healthiest and happiestwork environments in the world. Here are a handful of hte perks that Google employees enjoy:

Google is also a very "green" company, having been carbon-neutral since 2007. The company operates a biodiesel shuttle system that keeps the equivalent of 5,700 cars off the road. The company's data centers use half the energy of similar data centers, and Google has committed to funding $2 billion in renewable-energy projects. Currently, 35% of Google's energy consumption comes from renewable sources.

As far as crash-resistance goes, Google's dominant market share in Internet search gives it a wide competitive moat. People still use the Internet during tough economic times, and Google doesn't have to worry about debt payments -- it doesn't have any!

2. Costco (NASDAQ:COST)Costco may not be what you immediately think of when you hear "socially responsible," but it easily qualifies in terms of both employee benefits and environmental consciousness.

Costco is known for paying some of the best wages in the retail industry: The company's average hourly worker earns $21 per hour -- not including overtime -- and the CEO has publicly expressed his support for an increase in the Federal minimum wage. About 88% of Costco's workforce has employer-sponsored healthcare, and the company insists on remaining closed on Thanksgiving for the benefit of its employees, despite the fact that most competitors are open.

The company is also environmentally friendly and philanthropic. Costco's warehouses are constructed from more than 80% recycled steel, and the company has an extensive recycling program within its stores. The company also allocates a substantial amount of assets to charitable giving, and the process for applying for a donation or grant from Costco is quick and straightforward.

As far as recession-resistance goes, Costco can actually attract more customers during the tough times thanks to its ability to offer lower prices than its competitors. During the financial crisis Costco's sales barely budged, and then they immediately rebounded stronger than ever. In fact, Costco's current revenue is nearly double that of its best pre-crisis year.

3. Procter & Gamble (NYSE:PG)Last but not least is Procter & Gamble. Many of Procter & Gamble's products meet basic human needs, so it often aids in disaster relief efforts. For example, when the Philippines were rocked by a storm in 2013, P&G sent more than $3 million in personal-care supplies and monetary aid. Many of P&G's individual brands have their own programs as well. For example, the Pampers Vaccination Program has helped eliminate maternal and neonatal tetanus from 15 countries through the donation of more than 300 million vaccines. And the Tide Loads of Hope program sends mobile laundromats to disaster-stricken areas. The Pantene Beautiful Lengths program allows women to donate some of their hair, which can then be turned into real-hair wigs for women with cancer. And the Downy Touch of Comfort program helps to create and deliver homemade quilts to hospitalized children.

As far as crash-resistance is concerned, P&G's strength is its brand recognition as well as its geographical diversity. The company has some of the most recognizable and trusted brands in the world, and consumers are willing to pay a premium for them. And with sales in 180 countries, P&G isn't too vulnerable to weakness in any particular area of the world.

The proof is in the numbers; just look at how these companies performed during the financial crisis. In 2008 and 2009, though all three stocks declined, all three beat the S&P 500: 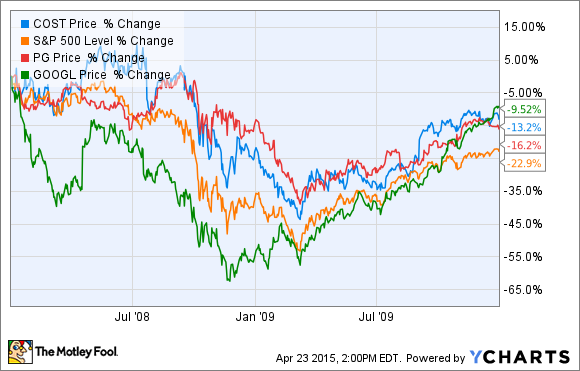 Just a starting point
Bear in mind that the three companies listed here are just a small sampling of the potential socially responsible investments that could not only survive, but thrive in the event of a market crash. So long as you apply the principles discussed here before making investments, you can build a portfolio full of great socially responsible stocks for a market crash.