Colt has struggled to sell firearms like the Model XSE despite the boom in gun sales created by fear of greater restrictions on ownership. Source: Colt

President Obama has been called the greatest gun salesman in history, moving the needle on gun sales merely because of the fear he might impose stricter firearm regulations.

FBI background checks conducted prior to a firearm purchase -- an imperfect but reasonable proxy for gun sales -- were nearly 17% higher between January 2009 (when President Obama took office) and March 2015 than they were in the entire decade that preceded it. There is a reason this period has been dubbed the "Obama Boom."

During his presidency, revenues at Smith & Wesson Holding more than doubled to $626 million last year, while Sturm, Ruger saw them triple to $544 million. Freedom Group, the largest firearms manufacturer that owns the top-selling Remington brand, along with others like Bushmaster and Marlin, saw revenues rise by 30%.

But that does not tell the whole story, as 2014 was actually a period of falling sales. The urgent need to run out and buy a gun now -- today! -- had eased considerably. Ruger sales were up 20% in 2013, and Freedom Group increased 35%. 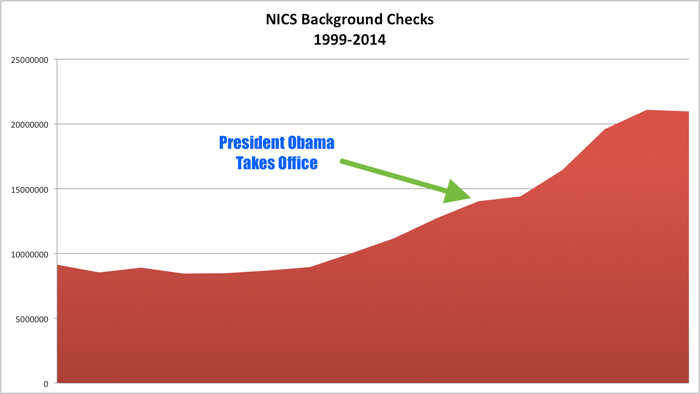 Just his presidential campaign was enough to ignite fears of greater gun restrictions -- the surge in background checks began in earnest in 2008. Source: FBI

It is a tale borne out by retailers like Cabela's and Dicks Sporting Goods that also rode the wave of gun sales higher, particularly across most of 2013 when the threat of action against gun owners was at its peak. As sales swelled after the tragedy in Newtown, Connecticut, and Aurora, Colorado, and passions on both sides of the gun control debate were inflamed, background checks and the sales they led to were at their peak.

However, not everyone joined in the bonanza. In fact, The New York Times reports there is one gun manufacturer that not only has struggled mightily through the surge but has so completely missed the rising tide it may end up filing for bankruptcy.

That manufacturer is Colt, one of the most famous and storied names in the gun industry and one which has seemingly been troubled just as long. The company is reportedly pursuing a two-pronged strategy to remain in business.

Plan A is to restructure its debt with bondholders, asking them to take a 70% loss on the face value of the debt they hold with longer maturities and higher interest rates. On the other hand, Plan B is to undertake what is called a prepackaged bankruptcy that would allow Colt to move quickly through the proceedings and emerge a healthier company on the other end.

While such dual tracks are common, Colt is being unconventional  as it seeks a restructuring that requires near unanimous consent from its bondholders, a difficult proposition under the best of circumstances, and a "prepack" without consultation with its largest debt owners.

Restructuring the balance sheet begins with $250 million worth of unsecured 8.75% interest rate bonds due in 2017. Colt is asking bondholders to accept just $300 in new junior secured bonds that bear a 10% interest rate and mature in 2023 for every $1,000 they hold. In addition, Colt will offer them $50 of new bonds for every $1,000, if they also vote in favor of its prepackaged bankruptcy plan.

The Times calls the move to do a prepackaged bankruptcy without the benefit of input from creditors a risky move and speculates the gun maker may be attempting to bluff bondholders into agreement, because the alternative -- its demise -- would be worse.

Colt, the company that created the Single Action Army Peacemaker, one of the most famous revolvers of all time, is about due for a pacemaker to keep it alive. Source: Colt

But Colt has had years of "curious" and wasteful financial dealings that stretch all the way back to its founding by Samuel Colt and his famed Peacemaker revolver. The more modern missteps, however, include:

With the winding down of military activities in Iraq and Afghanistan, Colt no longer has the comfort of military contracts to fall back on. It had been the sole manufacturer of M4 carbines and M16 rifles for decades but subsequently lost out to FN Herstal, the manufacturer of Winchester and Browning firearms, and to Remington.

When it did give a nod to the consumer market, Colt mostly focused on its classic revolver handguns until entering the market in 2010 with the R1 1911 pistol, one of the most popular categories of handguns. Colt notes that of the $2.4 billion handgun market, the 1911 category represented approximately $325 million of sales in 2013. But in 2014, the market weakened considerably for all players, and for a company plagued by costly maneuvers, like the restructuring and reversal of its manufacturing and defense businesses, Colt has been unable to cope.

The gun maker hinted last year it was running aground financially. In November, Colt said it may miss its May 2015 interest payments on the bonds it now seeks to restructure.

Colt is owned by Sciens Capital Management, an independent alternative investment management firm, which may explain all the financial engineering it endured instead of making good firearms.

But Smith & Wesson, Sturm, Ruger, and Cabela's all say the firearms market is returning to a period of normalcy, like the one that existed before the surge of 2013 and the crash of 2014. Having completely missed the "Obama Boom," it remains to be seen whether Colt Defense will be around to finally take part in the new environment of improving gun sales or if it will finally go bust.