Biotech and biopharma are having a rough go of it lately. A strong dollar has hurt profitability among major drugmakers, and smaller developmental-stage companies have repeatedly stubbed their toe in closely watched clinical trials in the first quarter -- highlighted by the complete failure of Celladon Corp's gene therapy to show any benefit whatsoever in heart failure patients.

The truth, though, is that these stocks are long overdue for a pullback. Valuations among revenue-generating companies have gotten out of line with their underlying fundamentals. And in the case of developmental-stage companies, their prospects for actually bringing an experimental drug to market have become unrealistic.

In short, the string of high-profile clinical successes, torrid rate of drug approvals by the Food and Drug Administration since 2012, and record-breaking commercial launches by some drugs have been a historical aberration. What's happening now is more in line with historical trends.

That's why I think it's time to get back to fundamentals when looking for long-term investing opportunities in biopharma. With that in mind, investors may want to consider Flamel Technologies (NASDAQ:FLML) and Pfizer (NYSE:PFE) as potential safe havens in these choppy biotech waters. Here's why.

Flamel's earnings are getting ready to soar
The tiny French biopharma Flamel might be poorly known among investors, but it shouldn't be, based on how its turnaround story is progressing. In 2012, the company hired a new management team that quickly changed Flamel's business strategy, resulting in two FDA approvals for Bloxiverz and Vazculep.

These two drugs have already turned Flamel into a cash-positive operation, starting in the fourth quarter of last year. But the best is yet to come.

The Street is expecting revenue for the first-quarter to come in at $52.5 million, representing a staggering 427% increase from a year ago. And full-year sales are estimated to jump by 1,170% to $187 million on the high end.

In terms of earnings, Flamel is on track to generate between $0.79 to $1.26 per share for the full year. That means shares are trading at a forward price-to-earnings ratio of around 15-ish, based on an average of this wide earnings range.

Flamel's story only truly gets exciting when peeking ahead into 2016, though. The company announced recently that it should have a third drug approved by the second quarter of next year, and two others under regulatory review: 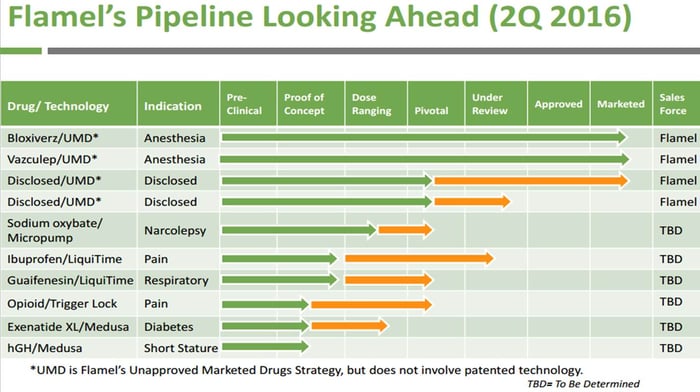 The biopharma's pipeline is also on track to push three different products into pivotal late-stage trials sometime next year, headed by the controlled-release sodium oxybate formulation that would tangle with Jazz Pharmaceuticals' flagship narcolepsy drug Xyrem for market share. While Jazz does have a handful of legal options to delay Flamel's march toward commercialization, I wouldn't be surprised if the two companies came to a mutually beneficially licensing agreement.

All told, Flamel's shares look fairly valued, or perhaps even cheap, based on its short-term fundamental outlook, and its clinical pipeline is rapidly creating deep value for shareholders.

Pfizer is unlocking latent value for shareholders
If we only consider Pfizer's falling revenues stemming from the patent cliff, this stock wouldn't look very appealing. A deeper look inside this complex biopharma, though, suggests that good things are in store for those willing to wait.

In my view, there are four key catalysts that should drive Pfizer's shares much higher over the next few years.

Up first, we have the newly approved breast-cancer drug Ibrance. By all accounts, Ibrance should easily become a megablockbuster, but some of the higher-end sales estimates suggest that it could become one of the world's 10 best-selling drugs, especially with a likely label expansion as a second-line treatment on the horizon.

Per its first FDA approval, Ibrance sales should reach $3 billion to $5 billion, with further label expansions potentially pushing the numbers into the $6 billion-to-$8 billion range. In short, this drug is set to be a major revenue driver for Pfizer in the not-so-distant future.

Another important catalyst should be the Hospira acquisition that gives Pfizer a front-row seat at the burgeoning biosimilar market. Although some considerable regulatory hurdles remain for biosimilars in the U.S., the fact that over $52 billion worth of biological products are set to lose patent protection by 2020 indicates that this should be a huge opportunity. The key thing to understand is that Hospira is a leading name in the area of biosimilars, giving Pfizer a major competitive advantage over its rivals.

A bit further down the line, we have Pfizer's entrance into the immuno-oncology arena facilitated by its partnership with German Merck KGaA. While we still don't know much about this program beyond the broad strokes, the company's management believes that it now has the assets to directly compete with industry leaders AstraZeneca, Bristol-Myers Squibb, and Merck & Co.

The final catalyst, however, might be the most important. Pfizer appears to be prepping for an eventual split to ameliorate the lingering negative effects of the patent cliff.

The current hypothesis is that the company plans on pairing its established-products business with Hospira to form a generic-drug maker, while carving out a new innovative-products business highlighted by growth products such as Ibrance, Eliquis, and the Prevnar franchise. This bold move would immediately create significant value for shareholders and put the drugmaker on a clear path toward long-term growth.

Are these stocks a buy right now?
I think Pfizer is generally a good name to have in portfolios regardless of market conditions. After all, it offers a decent dividend yield of 3.24% and a strong share-buyback program.

Flamel also comes off as a compelling buy because its story centers on improving fundamentals for the most part, and it offers a fair amount of latent upside via its clinical pipeline that clearly hasn't been baked into the share price as of yet. A dip in the overall sector could present a promising buy opportunity for both Pfizer and Flamel.