National Oilwell Varco (NYSE:NOV) was expected to be hurt by crashing oil prices, and in that respect, the company's first-quarter earnings didn't disappoint. Find out just how bad they were, why you shouldn't worry, and which numbers really matter to long-term investors.

The numbers: Bad, but not unexpected
For the first quarter, the company reported sales of $4.82 billion, down 1% from the same quarter last year, while earnings per share -- adjusted for for $122 million in one-time charges -- rang in at $1.14 per share, down 12% year over year.

As this table shows, National Oilwell Varco's falling sales and earnings, for the most part, came in slightly better than analysts were expecting.

In the company's Rig segment, which builds and sells onshore and offshore oil rigs -- by far its largest driver of sales and profits -- sales actually increased by 12%, to $2.52 billion, and EBITDA, or earnings before interest, taxes, depreciation, and amortization, came in at $511 million, for an EBITDA margin of 20.3%. The backlog declined by a painful, but not unexpected, 33% as the company booked $236 million in new orders, 42% of which was offset by the effects of a stronger dollar.

The Rig Aftermarket segment sells consumable equipment rigs need to function and reported a 4% decline in sales to $719 million that generated $206 million in EBITDA for an EBITDA margin of 28.7%.

The Wellbore Technology segment -- which makes equipment that goes into the oil wells itself such as drill bits and pipes -- saw revenue decrease 8% to $1.17 billion, as EBITDA came in at $229 million for an EBITDA margin of 19.6%.

Finally, the Completion and Production Solutions segment of the company -- which makes equipment for completing wells such as fracking pumping systems, tubing, and storage systems -- brought in $948 million in sales, a 5% decrease over last year. It generated $163 million in EBITDA for an EBITDA margin of 17.2%.

Three things that really matter
In a highly cyclical industry such as oil and gas equipment, one quarter's, or even a year's results aren't all that important. Rather there are three things I think long-term investors should focus on: the backlog, the buyback program, and management's plans for increasing the company's market leadership going forward.

Backlog still strong
The backlog declined by 27%, to $11.9 billion. The important thing to remember about this large backlog decline is that it's compared to last year's first-quarter backlog which was, at the time, an all-time record high generated at close to the top of the oil cycle. The current backlog still represents plenty of work to get the company through this downturn in the industry and gives them time to let oil prices, and oil companies, recover. 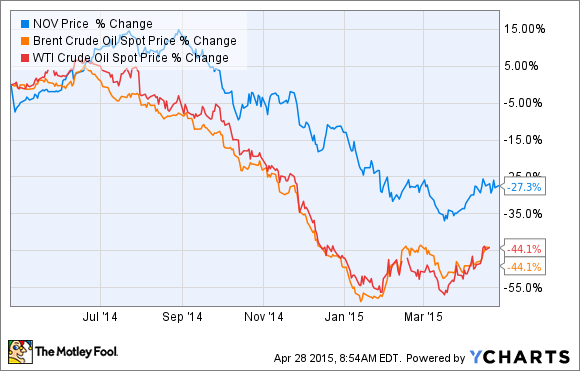 As this chart shows, National Oilwell Varco's share price has crashed alongside oil, which management is using to maximum effect by tapping its $3.024 billion in cash to buy back and retire shares. By doing this, the share count not only gets reduced -- which helps drive earnings-per-share growth -- but it also reduces the cost of the dividend. This in turn allows for faster dividend growth per remaining share, which, studies show, is one of the best things for long-term share price appreciation.

Since management began the buyback program in September of 2014 -- soon after the oil crash started -- the company has bought back 43.4 million shares or 10% of outstanding stock. In this last quarter alone, management bought back $1.3 billion in stock, or 6.2% of the share count.

With plenty of cash left on the balance sheet, the company has the ability to buy back more shares, but there is another route management could take that might prove even more profitable for investors in the long term.

Possible acquisitions to grow market share
In the earnings press release, CEO Clay Williams stated: "We have the financial resources to invest in acquisitions, as well as the transformative new technologies." This bodes well for the company's long-term plan to remain the world's dominant oil equipment manufacturer, and it could lead to stronger profitability -- and share prices -- in the future.

Bottom line: National Oilwell Varco is handling the industry downturn like the champion it is
This weak quarter came as a surprise to no one, but rather than focus on the short-term falling sales or earnings, I'd recommend long-term investors focus on management's excellent use of the falling share price to buy back stock at very attractive and undervalued levels, which should help drive both long-term dividend and share price appreciation. In addition, the company's ability to buy out a competitor (or several) might help boost its market share and margins in the future, when oil prices finally recover.