Playing chicken with customer goodwill
But the big surprise is Yum! Brand's China division, where its KFC chain remains damaged from the lingering effects of a tainted food scandal. System sales fell 6% on a 12% drop in comps, and though that sounds bad, the division is actually performing better than expected. If the restaurant operator can still hold it together after its second scandal in as many years, the fallout may not be as bad as previously thought. 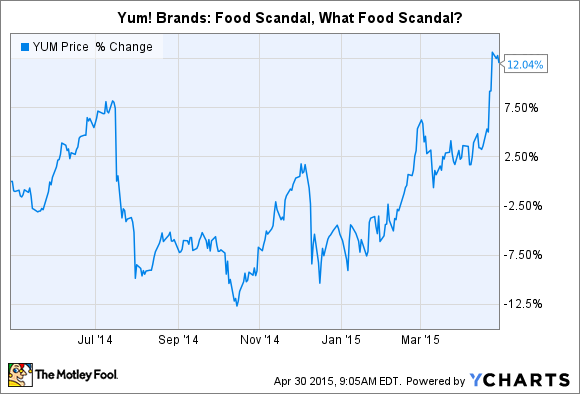 Yum! Brands thinks the third and fourth quarters of 2015 will be much better than the first half, and its performance in the first quarter makes its case for a rebound even stronger. Not only did sales fall less than expected, but also it was able to maintain a relatively healthy restaurant margin of 19%.

That's still down from the 23.4% restaurant margin it recorded last year, but since it's held up as well as it has, it lends credence to management's point it will be able to recover from the latest debacle. Yum! Brands also remains on track to open 700 new restaurants in China this year.

Rise and shine at Taco Bell
Here at home, systems sales at Taco Bell grew 9% higher as it opened over 170 new stores, but the gains were also based on the strength of those muscular comps it reported. And it was the launch of that new breakfast menu that included the A.M. Crunchwrap in addition to the breakfast taco that resonated with consumers.

Although the KFC chain didn't have quite as strong a quarter, the chicken joint's U.S. results were still respectable, with comparable sales growing 5% and both restaurant and operating margins expanding by about 2% each.

Feathers may be ruffled
While rising beef prices have made chicken the go-to option for many restaurants -- McDonald's, for example is pushing chicken sandwiches and Burger King's parent Restaurant Brands International (NYSE:QSR) reintroduced chicken fries to its menu -- the spread of a virulent strain of the H5N2 avian flu virus could risk KFC's recovery. So far the virus has mainly hit turkey flocks, but it's beginning to show up on commercial chicken operations and one egg-laying farm in Iowa is destroying all 5.3 million hens in an attempt to contain it.

Avian flu was one of the causes of Yum! Brands poor performance in China two years ago and the fact it's spread here has serious implications for KFC and the other fast-food chains. So don't be surprised if we see Yum! Brands stumble in the quarters ahead as a result.

Sliced and diced
One division no one is particularly surprised is underperforming is Yum! Brands Pizza Hut, where the chain reported comparable sales fell 1%, the ninth straight quarter it has failed to record positive comps growth.

Last year Yum! Brands introduced a major overhaul to Pizza Hut's menu that through its "Flavors of Now" initiative gave consumers some 2 billion personalization options for their pies.

Customization and personalization options is apparently leading to confused minds at Pizza Hut, which recorded yet another disappointing quarter. Photo: Vernon Chan via Flickr

That seems ridiculously complicated and the lackluster performance was hinted at earlier this month when the largest Pizza Hut franchisee NPC International reported its fourth quarter revenues were "stressed" by the launch of the new menu. Fortunately for Yum! Brands Pizza Hut is the smallest of its major business segments so the impact it has is otherwise negligible.

Similarly, Yum! Brands' attempt to establish a foothold in India is also going awry as comparable sales have worsened quarter after quarter. They were down 11% in the latest period, but with just $22 million in quarterly revenues, it amounts to little more than a rounding error for the rest of Yum! Brands operations.

A yummy treat for investors
I'll admit to having thought Yum! Brands China division would be worse off than it is, and would be so for a longer period of time, too. Its apparent resilience, though, highlights just how strong the KFC and Pizza Hut brands are in China.

The big questions now for investors are can the second quarter show continued improvement and how much will the avian flu scare worsen. If history is any guide, Yum! Brands will remain perched atop the fast-food industry.