What: Workforce housing and accommodations provider Civeo Corp (NYSE:CVEO) stock is up big today, about 13% in midmorning trading, after moving up more than 17% earlier. That's a nice move, but it's still down about 80% from its starting price after being spun out from Oil States International last year: 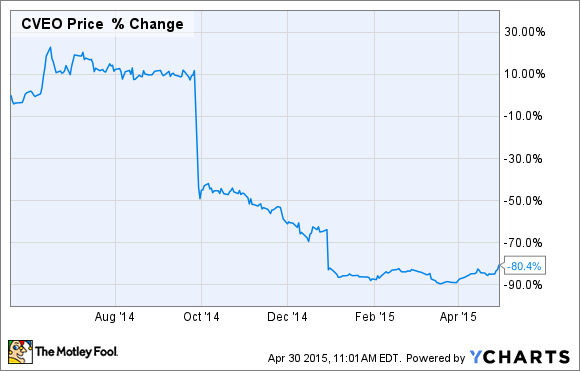 So what: The company reported earnings after market close yesterday, and it's looking like a pretty solid quarter: beating on earnings (flat, versus an expected loss) and solidly outperforming on revenue. However, it's looking like the biggest driver behind today's stock price move is the company's disclosure that it had received commitments from lenders to amend its credit facility. This is a major and necessary step for the company, which is planning to move its corporate headquarters to Canada this year.

Now what: The move to Canada had been announced earlier, and sounds like a smart move since the company derives most of its business there, supplying accommodations for companies in the energy and natural resources businesses. This move should have a positive impact on the company's bottom line, largely from a lower tax basis.

For now, the company faces continued headwinds related to oil demand. Onshore oil and gas production activity in the U.S. and Canada is expected to decline in 2015, as indicated by the already significant reduction in drilling activity so far this year. Revenues are well down from last year, and it's likely that the company will keep feeling pressure until global supply and demand for its customers' products rebalance, and activity can resume.

Until then, the company will probably see minimal growth in demand for its services, putting a squeeze on its profitability for an indeterminate period of time. It's also worth pointing out that the company suspended its dividend at the end of last year, so there's no income in play while you wait for the market to bounce back. Probably best to remain on the sidelines for now.