Ahead of its annual shareholders meeting over the weekend, Berkshire Hathaway (NYSE:BRK.A)(NYSE:BRK.B) reported first-quarter results for 2015. Operating earnings, which exclude the impact of gains or losses in its equity and derivatives contracts, jumped by 20%, to $4.24 billion, up from $3.53 billion in the first quarter of 2014. Net income also jumped 9.7%, to $5.16 billion, or $3,143 per Class A share.

Investment results were less than spectacular, largely the result of losses from its outsize public stock portfolio. The company reported losing $1.02 billion from its equity portfolio.

Berkshire's stake in American Express (NYSE:AXP) was a particularly large driver of the decline, with shares falling by 16%. The quarterly report notes that its four largest positions, which includes American Express, accounts for 58% of the fair value of its equity investments.

Book value per share -- Buffett's favorite yardstick for Berkshire's long-term performance -- grew by just 0.5% during the quarter, to $146,963 per class A share.

Its operating segments grew across the board
Berkshire gives investors the benefit of breaking out its results by business line. Its railroad, utilities, and energy segments showed the biggest jump in operating income, rising 25% from the first quarter of 2014, to $1.466 billion.

These businesses represent one of Berkshire's biggest sponges for the company's cash. It spent $2.6 billion on capital expenditures during the quarter, with $9.4 billion expected for the remainder of 2015. 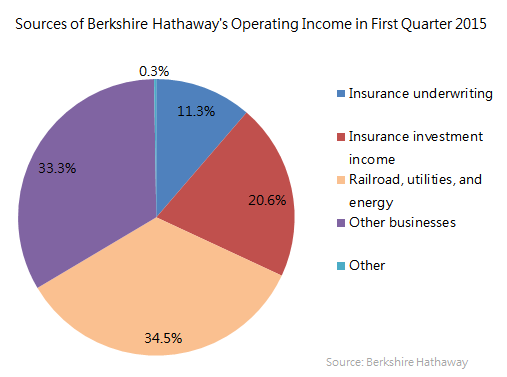 Its slow-and-steady insurance businesses continued on their paths of posting underwriting and investing profits. The company reported that it earned $480 million in underwriting profits, a 4.1% improvement from the prior year. Its investment income from its insurance lines rose 21.5% year over year, to $875 million for the quarter.

Insurance underwriting profits will vary tremendously by quarter and by year. What really counts is that Berkshire can produce underwriting profits in the aggregate, something it has managed to do better than most property and casualty insurers. As long as it produces underwriting profits, the "float" it receives for writing insurance is effectively a free source of financing for Berkshire. The company's float now stands at $83.5 billion, up from $78 billion in the first quarter of 2014.

Its net earnings from its derivatives book, which can swing wildly from quarter to quarter, came in at $920 million for the quarter. Warren Buffett downplays results from its derivatives positions, given that the actual gain or loss won't materialize until the positions are settled years from now. Its quarterly report notes that its contracts had a remaining weighted average life of 5.75 years as of March 31, 2015.

With the business performing just as well has it always has, Warren can look forward to a receptive audience tomorrow when its annual meeting kicks off in Omaha, Nebraska.