Please ensure Javascript is enabled for purposes of website accessibility
Log In Help Join The Motley Fool
Free Article
Join Nearly 1 Million Premium Members And Get More In-Depth Stock Guidance and Research
By Justin Loiseau – May 1, 2015 at 10:39AM

Did this dividend stock deliver for income investors?

Duke Energy Corp. (DUK -1.43%) reported first-quarter earnings today, missing on the top line but beating on the bottom. The quarter offered a few surprises for this seemingly steady dividend stock, so here's what you need to know about Duke's latest digits.

The numbers
On the top line, Duke Energy snagged $6.07 billion in sales. That put Duke's revenue behind both analyst estimates of $6.30 billion and 2014 first-quarter sales of $6.62 billion.

On the bottom line, though, adjusted earnings per share came in well ahead of expectations. Duke reported $1.24 in adjusted first-quarter EPS, ahead of the analyst estimate of $1.12 and first-quarter 2014's $1.17 adjusted EPS.

While Duke's sales were stagnant, the quarter marked the first time since second-quarter 2014 that the company exceeded earnings expectations. But even Duke was quick to point out that its surprisingly high profits were driven primarily by cold winter weather, and long-term investors must look beyond these quarterly numbers to know whether Duke is worth its dividend stock weight.

Beyond the numbers
The quarter was full of both surprises and steady operations. On the not-so-nice surprise side, Duke Energy is in the midst of an environmental battle stemming from coal ash spills in North Carolina. Coal ash is a byproduct of coal-fired power generation and a decidedly unwelcome addition to any natural water source. The company already agreed in February to pay $102 million for its Clean Water Act violation, but is being sued for an additional $25 million.

Duke's subsidiaries continued to trend in separate directions, for better and worse. For better, its regulated domestic utilities unit pulled in a pleasantly expected $774 million in income, up $37 million from first-quarter 2014. For worse, its international operations income dropped $94 million year over year to just $36 million. The decline was due primarily to a multiyear drought affecting its Brazil hydropower operations , an unwelcome omen in the face of California's continued drought.

Overall, President and CEO Lynn Good said she was "pleased with [our] operational and financial performance in the first quarter." She noted that several strategic initiatives are on track, including the long-awaited official sale of its Midwest Generation business to Dynegy (NYSE: DYN) on April 2. Following the deal, Duke quickly pushed through a promised $1.275 billion share buyback, with $225 million more to come. That should come as a welcome respite for investors who watched Duke's share price drop below the S&P 500's (^GSPC -1.03%) returns for most of the past two years, with an especially hard hit following the February coal ash fiasco. 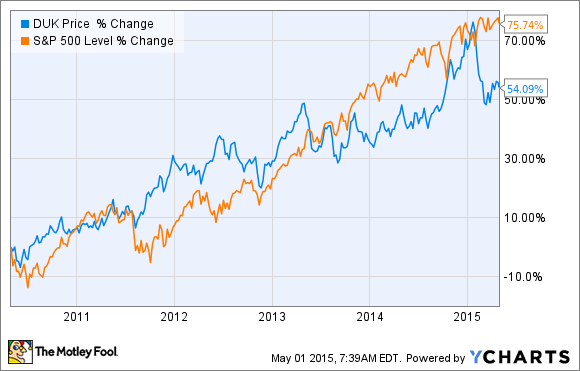 Duke Energy is, first and foremost, a dividend stock. That means investors expect Duke to steadily increase its share price while dishing out delectable quarterly payouts. On this front, Duke Energy continued to excel for income investors over the past quarter. Even through the worst of the financial crisis, as it and every other energy stock took a major hit, the corporation delivered on dividend growth. With a current 4.1% yield, it offers dividend stock investors more than Dominion Resources' 3.6% and Exelon Corp.'s 3.7% when it comes to cash in hand. 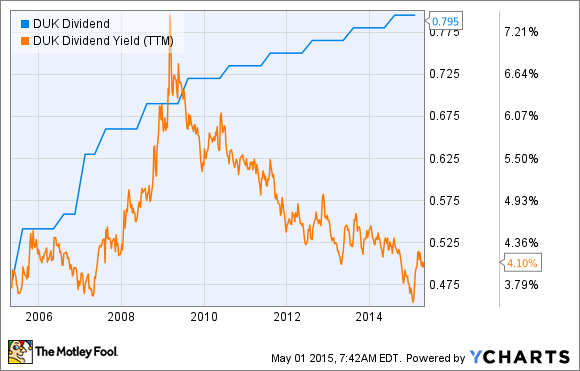 Did Duke deliver?
For dividend stock investors, Duke remains a steady investment option. Regulated utilities are its bread and butter, and the sale of its Midwest Generation unit knocks another volatile line item off this business's books. But Duke can do more. It needs to seal the deal on environmental damages and determine a better strategy for its often-floundering international operations, all the while keeping income investors happy with a decent dividend. Duke Energy is a solid dividend stock, but investors will need to keep a close watch on whether 2015 is a true turning point to turn this dividend stock from good to great.

Justin Loiseau has no position in any stocks mentioned, but he does use electricity often. Like right now. The Motley Fool recommends Dominion Resources and Exelon. We Fools may not all hold the same opinions, but we all believe that considering a diverse range of insights makes us better investors. The Motley Fool has a disclosure policy.