Please ensure Javascript is enabled for purposes of website accessibility
Log In Help Join The Motley Fool
Free Article Join Over 1 Million Premium Members And Get More In-Depth Stock Guidance and Research
By Beth McKenna - May 2, 2015 at 2:14PM

Carbon3D CEO Joseph DeSimone talks to the Motley Fool about the unique materials properties that CLIP enables, and more.

This is the second and final article in this interview series. (You can read the first article, which focuses heavily on CLIP inventor and Carbon3D CEO Joseph DeSimone, here.)

I was fortunate to conduct a phone interview with prolific inventor and serial entrepreneur Carbon3D CEO Joseph DeSimone recently. Carbon3D made a splash in the technology world in March when DeSimone unveiled and demonstrated the start-up's seemingly game-changing 3D printing technology, Continuous Liquid Interface Production, or CLIP, at the TED 2015 conference, while simultaneously CLIP appeared as the cover story in the journal Science.

Briefly, CLIP harnesses UV light and oxygen to "grow" polymer parts continuously at speeds 25 to 100 times faster than the leading 3D printing technologies. Additionally, CLIP can produce 3D-printed objects that have a smoother surface finish than conventionally 3D-printed parts and a structural integrity on par with injection-molded objects, according to Carbon3D. You can read more about the process here.

CLIP's generating much buzz because it has the potential to disrupt the global manufacturing sector, as speed, surface quality, structural integrity, and materials capabilities are the key hurdles that have been holding 3D printing back from moving beyond prototyping and select, short-run production applications into a greater array of manufacturing applications. 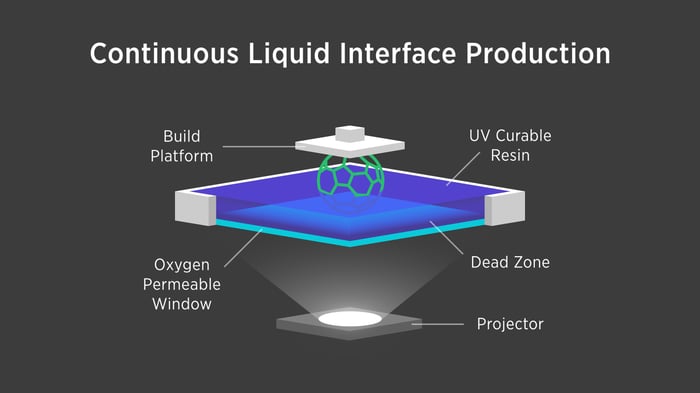 DeSimone: "We can use chemistries that nobody else is able to use"
DeSimone told me that the media focus has been on CLIP's impressive speed since it was the capability that was easiest to demonstrate at TED, but that the "materials properties [enabled by CLIP] are really key" and the even bigger story. Indeed, as it doesn't matter how fast a 3D printer can churn out any object if customers can't get the materials properties they need for their specific applications.

There are two primary things investors should know:

(To be clear, DeSimone told me the first item, whereas the related second one is my interpretation after listening to what he had to say and doing my own research. If my take turns out to be incorrect, I'll certainly let readers know.)

As to the latter point, I asked DeSimone if CLIP could produce, for instance, a polymer such as one of the tougher, more rigid nylons. What I had in mind was the importance of Stratasys' (SSYS -2.33%) introduction of Nylon 12 for its Fortus production printers in late 2013. This was a big deal, as 3D printing using nylons was an estimated $200-million-per-year market at that time.

DeSimone said that CLIP can enable the production of a material with properties akin to Nylon 11. Among nylons, Nylon 11 is the most similar to Nylon 12. Both have properties that make them desirable for higher-performance industrial applications. Nylon 11 reportedly has higher strength and heat resistance, but lower impact strength and UV light resistance than Nylon 12, according to my research.

CLIP is a polymer-based technology, so in its present form it doesn't have metals capabilities. This doesn't mean that CLIP doesn't have the potential to be hugely successful, however.

The manufacture of plastic objects is already a humongous market. Furthermore, plastics are increasingly being used to replace metals in some applications where weight is a critical factor. A good example is the auto industry, where corporate average fuel economy, or CAFE, standards are driving automakers to replace as many metal parts with lighter-weight plastic ones as they can. According to DuPont, plastics currently account for 16% of the weight of an average vehicle, but could rise to 25% within five years.

This isn't to say that there's not immense potential in the metals 3D printing market -- there is. However, I think it's likely that there will be more than one winning 3D printing technology, given there's an endless variety of materials and applications.

What about ceramics?
It seems to be flying a bit under the radar that CLIP has the potential to enable ceramics to be used to produce 3D-printed parts. This possibility exists because some ceramic slurries use polymers as binders.

I didn't get to explore this topic with DeSimone, as our interview time ran out. I'd assume ceramics are on the back burner as the Carbon3D team perfects CLIP's core polymer capabilities.

What size objects can CLIP make?
The CLIP machine DeSimone demonstrated at TED can create objects up to three inches by four inches and up to 12 inches long, according to Re/code. However, that was just a prototype, not the only size that works using CLIP, according to DeSimone. I think we can expect more news on this front soon.

Who's testing CLIP 3D printers?
CLIP machines are now being tested by Carbon3D's partners, including an automotive company, an athletic apparel company, a design studio, and an academic research lab. That's all DeSimone can share, as the company isn't naming names.

Nike was an early adopter of 3D printing. The athletic shoe giant now uses the technology for custom and short-run production, as well as prototyping; 3D printing is currently too slow to use for mass production. So, Nike could be the athletic apparel company that's testing CLIP, especially since its Oregon headquarters is a relatively quick sprint away from Carbon3D's and its venture capital funders' Silicon Valley base. Adidas, New Balance, Reebok, and Under Armour are running fast in their 3D printing efforts, so they're also possibilities. All these companies are on Stratasys' roster of customers.

CLIP reportedly excels at producing elastomers -- polymers with properties like natural rubber -- a great fit for companies that can charge considerably higher prices for their athletic shoes with superior fits and shock-absorbing properties. If CLIP is as speedy as it's being touted -- and has the potential to further ramp up its speed to 1,000 times that of the leading 3D printing technologies, as DeSimone said in his TED talk -- then CLIP should allow these athletic shoe companies to greatly expand their use of 3D printing.

Commercialization
Carbon3D naturally isn't discussing commercialization yet. What we do know is that the first product is slated to be released "within one year."

We don't yet know the price of an initial CLIP 3D printer. It seems likely that the price could be prohibitively high if Carbon3D's primary initial goal is profitability. Economies of scale, of course, eventually bring down the cost of new products. However, I think it's probable that early profitability will take a backseat to gaining traction in the market. So, I think we can expect Carbon3D to price its initial printer quite competitively, so as to gain market share. Carbon3D has a $51 million war chest of venture capital cash, including $10 million kicked in from Autodesk's (ADSK -1.93%) Spark Fund. Losing money in the short term to gain market share is the usual game plan for well-funded start-ups.

Let's print a wrap...
CLIP appears to have the potential to disrupt the conventional manufacturing sector and present a sizable threat to 3D Systems (DDD -5.89%), Stratasys, and voxeljet, all of which are involved in the enterprise-focused plastics space, and perhaps to companies involved in injection molding, such as Proto Labs. However, it's too early to gauge how much of a threat Carbon3D could present. For instance, we don't yet know how successful the company will be at scaling up the size capacity of its printer's build area, and if and when CLIP will be able to produce multimaterial and/or multicolor objects.

My thanks to Joe DeSimone, as well as Kristine Relja and Jennifer Gentrup, who coordinated this interview.

Beth McKenna has no position in any stocks mentioned, though she would welcome her fellow Philadelphia-area native Joe DeSimone's CLIP machine helping to build her a better running shoe! The Motley Fool recommends and owns shares of 3D Systems, Nike, Proto Labs, Stratasys, and Under Armour. Try any of our Foolish newsletter services free for 30 days. We Fools may not all hold the same opinions, but we all believe that considering a diverse range of insights makes us better investors. The Motley Fool has a disclosure policy.