What: Shares of every component of the Seadrill family -- Seadrill Limited (NYSE:SDRL), Seadrill Partners (OTC:SDLP), and North Atlantic Drilling (NYSE: NADL) -- had a fantastic run in April, rising 40%, 28%, and 23%, respectively. While oil prices' decent run in April had a lot to do with rising shares at Seadrill, there were a few other factors as well. 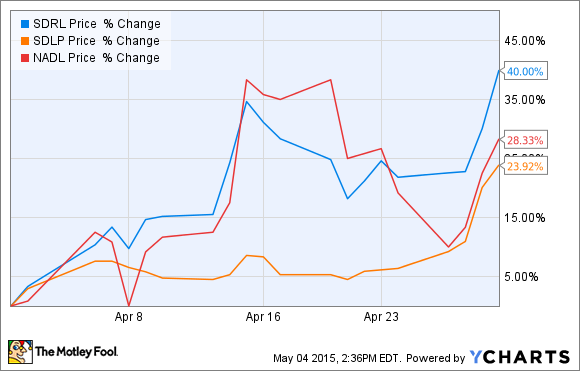 So what: When the fate of your business is tied to oil producers' desire to spend money to find new sources of oil, a 12% surge in the price of a barrel of Brent crude is going to help. However, what really stood out for Seadrill and North Atlantic Drilling this past month was that negotiations with Rosneft are still continuing. All parties agreed to delay the final terms on the proposed $4 billion deal involving the contracting of North Atlantic's rigs to Rosneft, as well as Rosneft's taking partial ownership of the company. It may not sound like great news that the deal was delayed, but political sanctions prevent Western companies from working with Russian companies, and the price of oil isn't conducive to drilling anyway. By delaying the date, it keeps the door open that a deal can be struck when Russian Arctic drilling is economically feasible again.

Now what: The rise in oil prices is little solace given the headwinds that Seadrill and its subsidiaries face over the next couple of years. The large amount of new rigs that are entering what is an already oversupplied market will probably lead to shareholder pain for a while longer. If the company can secure some contracts in the future, it will certainly ease any near-term fears investors may have about the company, but the long-term prospects still look rather bright, considering it has the newest and most advanced rig fleet in the space.