Please ensure Javascript is enabled for purposes of website accessibility
Log In Help Join The Motley Fool
Free Article Join Over 1 Million Premium Members And Get More In-Depth Stock Guidance and Research
By Rich Duprey – May 5, 2015 at 2:25PM

Can the burger king reimagine itself as a swanky food joint as its new CEO seems to want?

There are so many changes being planned and implemented at McDonald's (MCD 0.63%) to reverse its bone-jarring slump in same-restaurant sales that you may not even recognize the fast-food joint when recently installed CEO Steve Easterbrook is done with it.

It's obvious that something needs to be done. Sales at stores that have been open for at least 13 months have fallen in 14 of the last 17 months. But implementing numerous changes with the hope that something sticks runs the risk of creating a muddled marketing message that confuses customers. 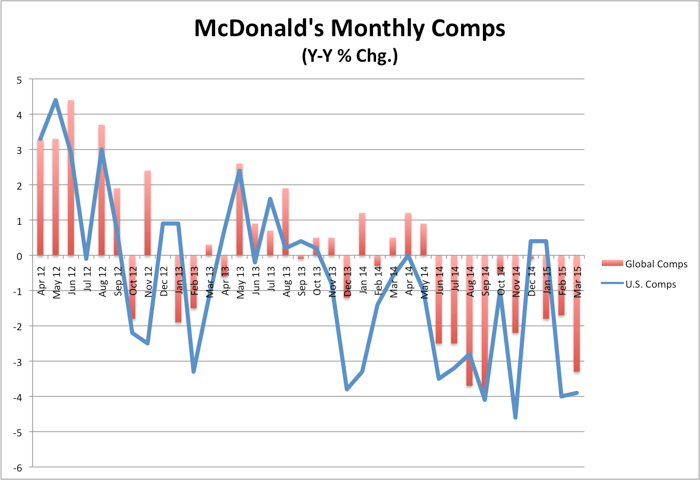 Easterbrook calls himself an "internal activist" who hopes to transform McDonald's into a "modern, progressive burger company." Choosing the right battles, then, becomes as important as deciding to enter the war in the first place.

What McDonald's is doing right
Of course, not everything McDonald's does is a disaster. It remains the leading breakfast restaurant. Industry analysts at Technomic previously estimated it owned 31% of the daypart, which generates fully one-fifth of its $28 billion in annual worldwide revenue.

Burger rival Wendy's, which is one of the very few national chains that doesn't have a breakfast menu, says the daypart is too crowded to effectively compete. But a number of new non-traditional competitors have entered the market recently, including Yum! Brand's Mexican food chain Taco Bell and White Castle.

Despite all its problems, McDonald's is still able to fall back on its popular coffee, but there are only so many times it can go to that particular well.

McDonald's has also shown a willingness to use its popular coffee as a weapon to combat its rivals, giving away its coffee for free to keep customers coming in and from defecting to Starbucks or Dunkin Brands' Dunkin Donuts. In fact, McDonald's best sales months recently have come when it was running a free coffee promotion.

And Easterbrook is willing to challenge conventional McDonald's orthodoxy by experimenting with an all-day breakfast menu. While there's some sense in the rationale of not cluttering the menu, customers sometimes want breakfast at unusual hours. Even if the menu can only be displayed in the morning, the rigid morning cutoff for serving breakfast foolishly limits the appeal of McDonald's strongest advantage.

Juggling too many balls
In addition to testing all-day breakfast -- and that's just in one market, San Diego -- McDonald's is attempting many different options to reverse its poor performance. Amongst the myriad things it is trying are:

McDonald's is serving up a heaping smorgasbord of change and it's not clear that any of it will be effective in turning around sales or mollifying its critics. For example, those agitating for a minimum wage hike note that McDonald's pay hike only covers those in company-owned stores, whereas the vast majority of McDonald's employees work for franchisees.

Having it your way is creating problems for McDonald's franchisees who have to foot the bill for all the changes. Image: McDonalds Operator's Association of Southern California

And the franchisees aren't pleased with all the changes McDonald's is making, because they are expensive to implement. The Create Your Taste menu has disappointed many franchisees who haven't seen any sales gains from the effort after investing hundreds of thousands of dollars in new equipment.

Largely ignored during McDonald's chase for the millennial customer is the core customer that looks to the Dollar Menu for a cheap meal. With Easterbrook committed to progressivism at McDonald's, there hasn't been much innovation at the low end of the menu.

McDonald's as a swanky burger joint is unrecognizable and probably undesirable to the majority of its customers. Rather than pleasing all its customers, the CEO's plans have something to offend everyone.

There hardly seems hope that any of the initiatives will be of such magnitude that they will be effective at halting the slide.