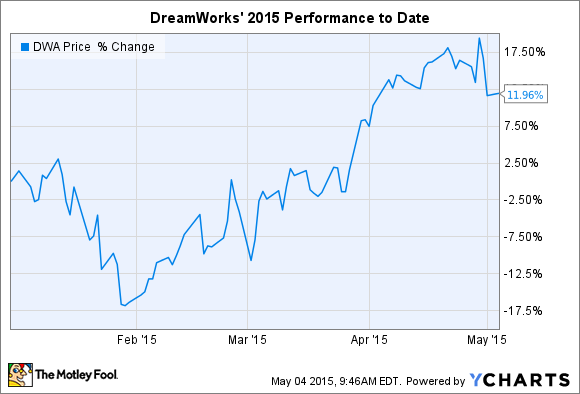 After the announcement, CEO Jeffrey Katzenberg and his executive team held a conference call with analysts to put those results in context. Here are five highlights from that discussion.

Home is a real hit

"Home's solid results at the box office, coupled with the receipt of an 'A' cinema score, serves as early evidence that the changes we're making in the core feature animation business are beginning to take hold." -- Katzenberg

DreamWorks' only feature film release of the year came through in spades for the company. It has collected over $150 million in U.S. theaters, which is a fantastic showing for a fresh property that isn't a sequel. In fact, it is already DreamWorks' highest-grossing new film in six years.

And the movie is doing just as well internationally. Home opened at No. 1 in 32 countries around the world and has secured the top animated film spot in 13 of those markets, including Russia and the United Kingdom.

"Currencies have had a significant impact on us." -- Katzenberg

Foreign exchange swings took a bite out of Home's reported profit -- and out of the company's overall results.

During the call, Katzenberg used the example of the Russian ruble, which has depreciated significantly against the U.S. dollar this year. In local currency, Home was the company's top grossing film of all time in Russia. However, it failed to meet that mark after translating results back into dollars.

Marketing made a key difference

"I'm incredibly pleased and grateful to the extraordinary efforts of the teams at Fox for their world-class marketing expertise and partnership." -- Katzenberg

And Lopez' American Idol singing event was a big success, attracting more than 40 million views on YouTube. "Fox just hit it out of the park," Katzenberg said about the Home marketing plan. "They just did an outstanding job."

"With regard to our Netflix agreement, we're on track to deliver a significant number of episodes later this year, including initial deliveries for 7 new series." -- Katzenberg

DreamWorks' output deal with Netflix is a big reason why the company thinks it can grow TV revenue to $250 million this year, with a profit margin north of 30%. The company delivered 40 episodes to Netflix in 2014 across four TV series.

This year, that production will spike higher. In addition to season two of each of these shows, DreamWorks will deliver seven more series. Investors can expect most of the financial benefits from these sales to occur in the third and fourth quarters.

"What I said last [quarter] was that if Home -- excluding restructuring, if Home was breakeven or better, we'd expect 2015 to be a breakeven year or better. I think we're still comfortable with that." -- Chief Financial Officer Fazal Merchant

Management stood by its prediction that 2015 will be a breakeven year for the company -- excluding the restructuring charges that DreamWorks is taking to organize the business for lower movie production volumes. Its TV division will be key to that result, as will the home entertainment performance of recent feature films.

Next year's profit or loss will revolve around DreamWorks' two scheduled movie releases, Kung Fu Panda 3 in March and Trolls in November.