It has been a banner start to the year for e-commerce titan Amazon.com (NASDAQ:AMZN) and its shareholders. 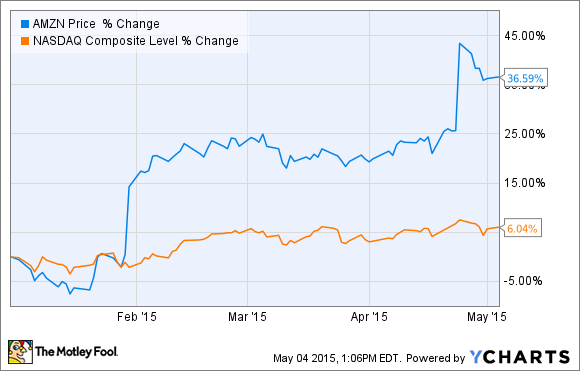 After its shares struggled last year, Amazon has eviscerated investors' and Wall Street's expectations in each of its earnings releases so far in 2015. As the chart above shows, the result speaks for itself.

However, a sizable portion of the analyst community believes the world's largest online retailer offers investors plenty of upside even as its shares flirt with fresh all-time highs. Let's see why.

Undervalued at all-time highs?
Amazon's most recent earnings report marked an important first. After only providing limited commentary about its growing Amazon Web Services cloud computing division for years, the company broke out AWS as its own reporting segment in its Q1 report. This might sound like semantics, but it's hugely important.

Given its consistent track record of price-cutting and Amazon's well-documented predilection for competing on price to gain market share, many expected AWS to prove only moderately profitable. Essentially no one expected AWS to enjoy the juicy 17% operating margin it reported to beautifully complement its breakneck 49% revenue growth rate.

Between these more-favorable economics and AWS' massive long-term runway for growth, Amazon's recent report prompted a number of Wall Street analysts to ratchet up their price targets for the stock. According to Barron's popular Tech Trader Daily blog, Amazon's blowout quarter prompted sell-side analysts at Raymond James, Janney, and J.P. Morgan all to increase their price targets for Amazon stock, to $485, $488, and a whopping $535, respectively.

Just the tip of the iceberg
Some of these estimates struck me as somewhat aggressive in the short term. My own long-term bull thesis on Amazon leans far more heavily on a qualitative -- versus short-term sum-of-the-parts -- analysis of Amazon's hard numbers.

The twin benefits of Amazon's absolutely massive growth markets and its unique and hugely successful culture will power shares continually upward for decades to come.

Let's start with e-commerce. Because e-commerce giants like Amazon and eBay have been around for the better part of the past two decades, it's easy for investors to mistakenly conclude that this is a "mature" category. That simply isn't the case, which you can plainly see thanks to quarterly data I often reference from the Department of Commerce.

Although it has enjoyed massive growth over the past decade, e-commerce remains only a tiny faction of U.S. retail sales, a number that will obviously increase in the decades ahead. And considering that the U.S. e-commerce industry is vastly more advanced than that in many countries, Amazon's overall global opportunity is truly titanic.

Keep in mind that Amazon continues to invest in inventive ways to make its e-commerce platform even simpler for users. Assets such as its massive distribution network have enabled Amazon to roll out unique offerings such as one-hour delivery, which give the company competitive advantages that most of its e-commerce competition won't be able to match.

Amazon's cloud computing opportunity is also significant. According to research firm IDC, the global market for public cloud computing spending should reach $127 billion by 2018. For context, Amazon's AWS platform remains only a $5 billion annualized business that focuses mostly on the infrastructure-as-a-service (IaaS) and platform-as-a-service (PaaS) subsets of the cloud industry at the moment.

This matters because roughly 70% of the total value of the cloud market mentioned above is expected to be concentrated into the software-as-a-service (SaaS) space. Amazon already operates a number of SaaS applications on its AWS platform, and the cloud likely still offers Amazon an attractive growth opportunity on the IaaS and PaaS side.

However, Amazon will likely need to evolve AWS beyond a largely infrastructure-driven business in order to maximize its economic opportunity in the cloud. Given Amazon's well-documented penchant for pivoting into related or ancillary business lines, it's reasonable to expect Amazon to aggressively go after as much of this booming market as possible in the years to come.

Culture counts
I'm by no means the first to discuss Amazon's unique culture, but it remains a critical point in understanding the company's long-term trajectory. Much has been made, both positive and negative, about Amazon's famously combative corporate culture.

However, the company's focus on creating value over decades rather than quarters, obsession with the customer, and emphasis on hiring and retaining the best talent should help it continue to compete in its current markets while leaving room to move into yet-unanticipated areas in the years ahead.

As one quick example, Amazon is so dedicated to serving its customers that CEO Jeff Bezos has been known to insist on leaving the seat next to him empty in meetings and negotiations to represent the obviously absent but critically important customer. This might seem trite, but it's this kind of uncommon dedication that will ensure Amazon continues to dominate in the future.

All this discussion is important because, as long-term biased investors, we Fools prefer to look beyond the quarter-to-quarter or 12-month price targets Wall Street tends to emphasize.

To be sure, the analysts' increased price targets indicate a similar bullishness to that argument I outlined above. However, investors and savers will benefit far more by taking a position in Amazon's multidecade expansion than worrying about its possible stock price a year from now. That's a key difference worth noting when investing in Amazon today.