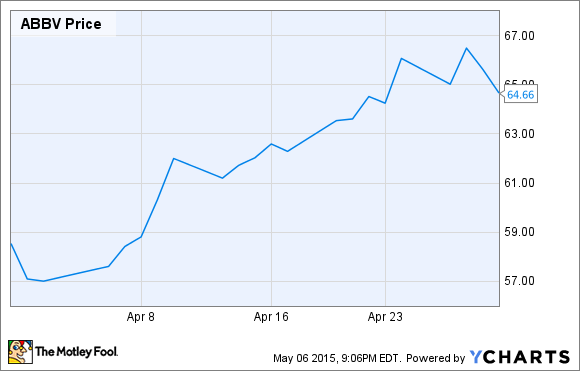 What: Shares of big pharmaceutical giant AbbVie (NYSE:ABBV) rocketed higher by 11% in April, according to data from S&P Capital IQ, following better-than-expected first-quarter earnings results and after receiving a priority review from the Food and Drug Administration for Viekira Pak in a new indication.

So what: For the quarter, AbbVie reported global sales of $5.04 billion, up 17.8% over the prior-year period on a constant currency basis, as global sales of Humira -- the best-selling drug in the world in 2014 -- rose 26% on an operational basis. Overall, Humira accounted for $3.11 billion of AbbVie's $5.04 billion in sales. Hepatitis C combo therapy Viekira Pak totaled $231 million in its first full quarter, including $138 million in the United States. Adjusted profit per share jumped 32% to $0.94 in Q1.

AbbVie also wound up boosting its full-year EPS forecast on the heels of its strong results. It now expects adjusted EPS to range between $4.10 and $4.30 from a prior forecast that called for $4.05-$4.25 in adjusted EPS.

Now what: Overall, this was a very solid quarter for AbbVie, although a majority of revenue is still tied to anti-inflammatory drug Humira, which will begin to lose the first of its patents next year. Humira's multiple and staggered labeling indications will buy AbbVie time, so it's not as if $12 billion-plus in sales will immediately be exposed to generic competition. However, AbbVie is going to need Viekira Pak to step up and help abate some of the revenue losses that are inevitable from the introduction of generic competition to Humira in the United States.

In spite of its lower wholesale cost and a multi-year exclusive agreement with pharmacy-benefits manager Express Scripts, AbbVie's HCV combo didn't sell very well in Q1. By comparison, Gilead Sciences' (NASDAQ:GILD) Harvoni racked up $3.58 billion, with $3.02 billion of those dollars coming within the United States. It would appear, at least in the early going, that Harvoni's single-pill convenience and lack of a need for a ribavirin (some Viekira Pak patients need to take a ribavirin) are making it the go-to HCV drug.

I believe AbbVie still holds blockbuster potential with Viekira Pak simply because of the sheer number of HCV patients worldwide that need to be treated -- 180 million per the World Health Organization. I'm skeptical that Viekira Pak will replace Huimra's exceptional revenue stream, but I do see the potential for Viekira Pak to grow into a multi-billion drug by 2016. With that being said, I'm leery of suggesting AbbVie has a lot of additional upside considering Humira's uncertain sales future beyond 2016, and would wait for a substantial pullback in its share price before considering a position.