Please ensure Javascript is enabled for purposes of website accessibility
Log In Help Join The Motley Fool
Free Article Join Over 1 Million Premium Members And Get More In-Depth Stock Guidance and Research
By Daniel B. Kline - May 8, 2015 at 8:15AM

Traditional stores face all sorts of problems, and not all of them come from the Internet.

Running a traditional retail operation used to be so much simpler.

In the not-so-distant past, aside from outright robbery -- both the criminals with guns and the shoplifting kind -- there were simply fewer risks associated with operating a store. Customers were tied to geography, so location could cover a lot of ills.

Now, the threats might not wear masks and brandish weapons, but the possibility of theft is markedly higher. Retailers including Target (TGT -1.72%) and Home Depot have had tens of millions of their customers' credit card numbers stolen. Countless other retailers have experienced similar problems.

Retailers have also have become increasingly vulnerable to online competition. It has been a long time since brick-and-mortar stores only had to deal with rivals located in the same geographic area, but online stores are becoming even more clever and location matters less than ever.

This has led to two major risks for retailers on top of credit card theft. The first is that digital stores will drive prices so low that physical businesses cannot compete due to the costs associated with running retail locations. The second is less clear, but is equally a drain on stores. It's the practice of showrooming -- the idea that customers will use brick-and-mortar stores for everything but the purchase.

Any of these three risks can undermine a retailer's business, pushing stores to the great mall in the sky next to Circuit City, Borders, and other retail casualties.

These thefts have not yet had a major impact on customers. In most cases, banks and retailers split the cost of any money actually stolen with the illegally procured credit card numbers. As Avivah Litan, a security analyst for Gartner, told Time, "It's still a pain in the neck for everyone, but there's very little actual fraud committed as a result of these breaches."

The risk for retailers is that customers become afraid of shopping due to the possibility that their data might be stolen. While these data thefts (which have occurred online as well) so far have had little actual impact on shoppers, their size and the fact that they happen silently -- without those affected knowing until after the fact -- makes them frightening for customers. 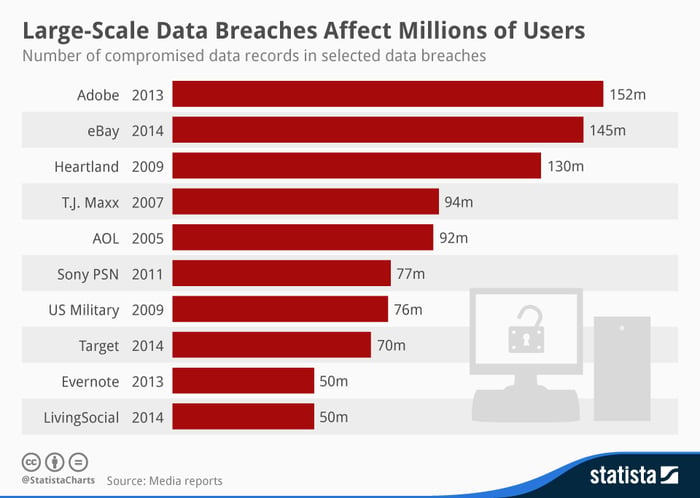 Online retailers force margins down
Back in my days of running a retail operation (a giant toy store that remains very successful) the owner and I had a rough rule that any sale had to be at a minimum of 40% gross margin in order to cover overhead. There was a little wiggle room for special orders and a few other exceptions, but in general that was the necessary percentage to pay for rent, utilities, and employee costs.

Online retailers do not need to make the same margin since they don't have many of the expenses brick-and-mortar retailers do. This allows digital stores to charge cheaper prices (and in some cases actually make more money).

The largest online retailer, Amazon.com (AMZN -4.04%) -- which does not disclose its gross margin on individual items -- rarely, if ever, marks things up anything close to the 40% margin my former store needed. This was painfully obvious when we checked the prices for our best-selling items at the online retail giant. In most cases, the Amazon price for items sold directly by the retailer was marked up less than 10% above our cost.

Of course, Amazon likely paid less than we did as as a single, independent store, but so did large retailers such as Target, Wal-Mart, and Toys R Us. Those retailers' prices in their physical stores were cheaper than ours, but not by a wide margin.

That's, of course, just a single anecdote, but it's typical of the problem facing brick-and-mortar retailers. It's a risk to compete with online stores on price because it lowers your gross margin. That's OK if you can dramatically increase sales without increasing overhead, but in many cases it's impossible to add enough volume to make up for trying to compete on price.

Being a showroom is a money loser

Best Buy has been one of the chains affected by showrrooming. Source: Author.

Another major frustration from my toy store days was when staff in our radio control or model train department would spend significant time -- sometimes hours -- educating a customer on what he or she should buy only for the person to leave and complete the purchase on a website. In many cases we learned this had happened at a later date when the customer -- who had not purchased anything from us -- came back for more free advice about how to use that new big-ticket buy.

An RC vehicle or a train set can costs hundreds, even thousands, of dollars, so buying one is not a small decision. My team generally enjoyed working to make sure each person or family made the right buying decision. Having people sit on the fence or ultimately balk at the price has always been part of the cost of doing business, but doing all that work to see the sale go to a website was an expensive proposition.

Yes, the websites offered better prices, at least in part because they did not have to maintain a trained, reasonably paid sales staff.

This practice, in which the physical store acts as a showroom for a digital competitor, pushed Best Buy into trouble and has harmed countless other retailers. It's kind of a chicken-and-egg problem, because lowering prices to avoid losing sales does not lower expenses. It also does not help physical stores that online competitors have stepped up their game when it comes to delivery and hassle-free returns.

Retail is at a crossroads
Retail as we know it has changed a few times throughout American history. The rise of malls and big-box stores changed the nature of downtown areas across the country. Now, the risks for even successful retail chains have grown because they can be disrupted not just by online competition, but by criminals attacking their data.

It's possible to overcome these things -- my former store has grown steadily mostly by building strong customer relationships -- but most retailers walk a path filled with peril.