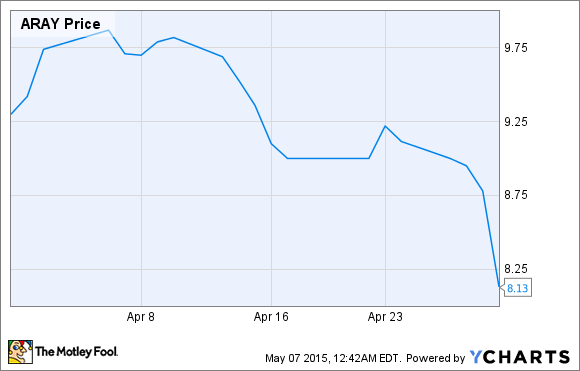 What: Shares of radiosurgery and radiation therapy device maker Accuray (NASDAQ:ARAY) were zapped in April, losing 13% (per data from S&P Capital IQ) after the company reported its third-quarter earnings results.

So what: For the quarter, Accuray's gross orders grew by 15% from the prior-year period, although revenue remained flat at $97.5 million. Excluding negative currency fluctuations, Accuray's operational revenue growth was 5%. Net loss for the quarter shrank to just $3 million, or $0.04 per share, from a net loss of $4.7 million, or $0.06 per share, in third-quarter 2014. Wall Street sources had expected a wider loss of $0.05 to $0.06 per share.

Now what: On one hand, Wall Street and investors were unprepared for the magnitude of the foreign currency situation's negative effect on Accuray's results. For the earnings picture to change so dramatically in a matter of three months is a bit disturbing from a management competence/trust aspect.

However, sans currency fluctuations, Accuray actually demonstrated mid-single-digit growth on a year-over-year basis. While it is experiencing some order fluctuation, which could explain part of its recent move lower, I believe investors might have overreacted by punishing Accuray for currency moves that it simply can't control. In short, on an apples-to-apples basis Accuray is steadily improving.

Accuray also has the numbers on its side. As a maker of medical devices designed to personalize patients' fight against cancer, and with the World Health Organization predicting that global cancer cases could rise to 22 million diagnoses per year in two decades, Accuray's precision radiation devices should take on a growing importance in the coming years. With Accuray likely to turn the corner to profitability in 2017, I believe long-term shareholders would be wise to add this to their radar and dig deeper into the potential investment thesis behind this company.