In a familiar refrain from major U.S. exporters during this earnings season, Johnson Controls Inc. (NYSE: JCI) said its second-quarter earnings took a hit from currency effects. The strong U.S. dollar -- which reduces the value of foreign earnings when converted back to U.S. dollars -- caused the company to miss earnings estimates and reduce its full-year earnings outlook. However, the underlying trends are much stronger than the headline numbers suggest. Let's check out the latest earnings.

Diluted earnings per share came in at $0.73 -- a cent shy of the analyst consensus estimate -- and management cut its full-year EPS guidance to $3.30-$3.45 from previous outlook of $3.55-$3.70. Overall revenue declined 3% in the second quarter. Excluding foreign currency conversion, though, it actually rose 4%. Moreover, the reduction in full-year guidance was primarily due to foreign-exchange currency effects, CFO Brian Stief said during the earnings conference call.

Johnson Controls reports out of three business segments: Power Solutions, which principally makes automotive batteries; Automotive Experience, which makes car seating and interiors; and Building Efficiency, which specializes in heating, ventilation, and air conditioning, or HVAC, solutions to the construction markets. Here's how each unit performed in the quarter.

Power Solutions
Power Solutions made an impressive return to form with unit shipments up 7%, driven by a 9% increase in aftermarket volume. Power Solutions also sells to original equipment manufacturers (usually car companies), and volumes increased 3% to these customers.

The big story here was the 30% increase in aftermarket sales in Europe. The comeback is strong evidence that its difficulties last year were mainly due to the mild winter (consumers replace fewer batteries when the weather is good) rather than any kind of systemic problem.

Building Efficiency
This segment's quarterly order growth was an impressive 8% when adjusted for foreign currency and acquisitions -- indicating strong growth to come in future quarters. Also, McDonald outlined strength in orders in the North American institutional market, which is Johnson Controls' core strength.

"There we saw our orders up on a consolidated basis were up 11%. And where we really saw the strong growth was in the education, the local, state and federal government markets. Those were the strong verticals for us," according to the EVP.

A quick look at the Architectural Billings Index from the American Institute of Architects confirms the strength in these end markets. The index is a leading indicator of construction activity in North America. A reading above 50 indicates growth, and the chart below shows the institutional index has been strong in 2015. 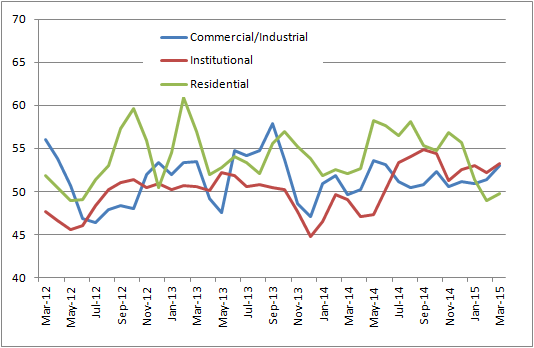 The takeaway
The reduced guidance was frustrating for investors, but it was primarily due to currency effects. The company's three segments are on a solid footing, with each expanding their margins. Meanwhile, more growth is expected for the rest of 2015. Underlying prospects look good for Johnson Controls even if the headline data wasn't great in the second quarter.