Despite there being a number of challengers to its dominance, Keurig Green Mountain (NASDAQ:GMCR.DL) has attained a dominant position in the United States single-serve home-brewing market.

Starbucks (NASDAQ:SBUX), which is no slouch in the coffee game itself, wants a piece of that business but has had more success with its Via instant coffee lines than in selling its Verismo single-serve machine. The coffee giant has even done better selling its branded K-Cups (on which it pays Keurig a royalty) than it has done with its own brewer.

But just because Keurig has sold a lot more coffeemakers than its rival does not mean it has the superior machine. After looking at the sales numbers, I'll break down the pluses and minuses of each brewer, focusing not just on which makes the better cup of coffee, but versatility, pod selection, and price-per-cup of coffee. 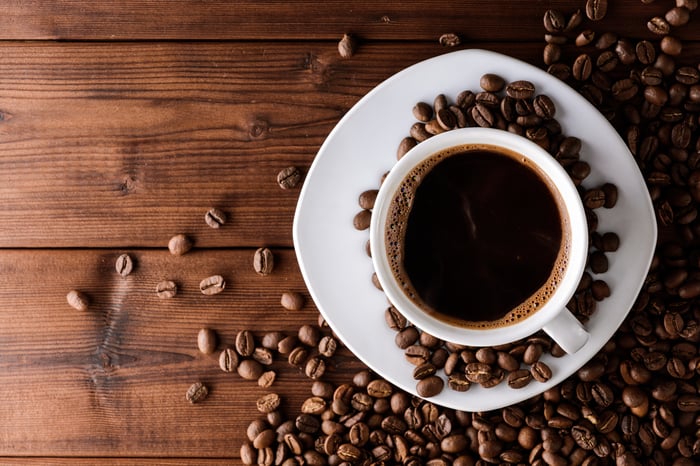 How dominant is Keurig?
Keurig Green Mountain said in its most recent annual report that it accounted for 30% of retail coffee sales last year. More than one in five U.S. households have one of its K-Cup brewers, the Associated Press reported.

Keurig has changed how Americans consume coffee. Single-cup brewers are now the second most popular method for making coffee in the U.S. (behind traditional drip machines), with 29% of American coffee drinkers using them in 2014, according to Statista.

Of the entire U.S. single-cup home market, the statistics site estimates that Keurig had about a 20% share of the roughly $5 billion market in 2014. Starbucks is actually not that far behind in second place with 12.5%, according to Statista, but the vast majority of that does not come from selling Verismo pods. (The coffee chain does not disclose sales for Verismo, but the number is a small fraction of the brewers Keurig has sold.)

The overall retail market -- which includes single-cup and other types of coffee tops $11 billion -- according to Food Navigator. Keurig places second on that list behind J.M. Smucker, with Starbucks coming in third.

K-Cup vs. Verismo: A look at the machines

In my office we have a Keurig K45 Elite Brewing System. The machine has a water reservoir, which allows for brewing multiple cups without refilling the tank each time, and offers the ability to brew three cup sizes -- which equate to roughly 8 ounces, 10 ounces, and 12 ounces. The brewer takes about a minute to warm up and then it can make multiple cups in rapid succession with little time in between.

Keurig also sells "mini" versions of the machine which lack the water tank and its 2.0 system which can make full carafes (and comes with the company's controversial digital rights management chip stopping users from brewing with unlicensed third-party pods).

Our Verismo machine also offers a water reservoir and it can make either an eight ounce cup of coffee or a standard-size shot of espresso. It takes a little longer to warm up than the Keurig brewer, but not enough to matter. The machine also has a button for processing the milk pods, which can be used to make lattes.

Which makes better coffee?
The Keurig system offers an enormous amount of variety with hundreds of different licensed and unlicensed K-Cups being offered in not only coffee, but tea, hot chocolate, and more. The quality of an individual pod greatly impacts how the brewed cup of coffee tastes and some are better than others.

Verismo has a much more limited selection. It can only use the small selection of pods that Starbucks makes itself. Basically, the company offers its standard in-store brews as well as a few limited-time special blends. It also sells espresso and milk pods which can be combined to make a latte and a few tea offerings branded to its Teavana line.

In general, though I love the selection offered by Keurig, I find the Starbucks Verismo makes a better cup of coffee. It's a small cup of coffee or a tiny latte (about eight ounces), but it tastes very similar to the in-store product. The output of the Keurig machine can be very good as well -- specifically when used with one of my favorite pods -- but it's a bit closer to "good for a cup of coffee I brewed myself" than the cup you could get from a barista.

Keurig does score some points for offering excellent hot chocolate choices and decent teas (though it's hard to see why you would use the machine for tea when a tea bag is a single-cup serving).

Comparing the cost-per-cup
Cost is an area where Keurig trounces the competition. Verismo pods sell for around $1 each, with milk pods costing about $0.83 each. That makes an eight ounce cup of coffee from the brewer cost $1 and latte or cappuccino a little under $2.

K-Cup prices can vary greatly, as off-brands and unlicensed pods cost less. There are also bulk deals offered in supermarkets and warehouse clubs for the Keurig pods. In general though, a K-cup costs between $0.40 and $0.75 for any reputable brand. Prices tend to go down the more you buy, but Keurig sells a number of pods on its website for a $17.99 list price for a 24 count package -- that's about $0.75 each.

I have paid a lot less than that when stocking the office pantry and more when buying certain premium pods (like Starbucks' own).

And the winner is
For a pure coffee experience, I lean toward the Verismo, and if I was buying one machine for personal use, that is what I would own. The problem Starbucks has -- and it's a big one -- is that Keurig offers so many more flavors, beverages, and choices. That makes K-Cup brewers a much better solution for offices and even homes where multiple people plan to use it.

Starbucks delivers a better coffee experience, in my opinion, and the ability to make lattes and cappuccinos without using an external milk frother is very nice. Keurig, however, offers a good enough cup of coffee at a cheap price with more sizing control, and a much broader selection of coffee as well as other drinks.

Keurig K-Cup vs. Starbucks Verismo: One Sells More, but Which Is Better? @themotleyfool #stocks $GMCR.DL $SBUX Next Article
Current