Please ensure Javascript is enabled for purposes of website accessibility
Log In Help Join The Motley Fool
Free Article Join Over 1 Million Premium Members And Get More In-Depth Stock Guidance and Research
By Matthew DiLallo - May 10, 2015 at 6:00PM

For Harold Hamm finding oil has always been easy. Keeping his oil wealth… not so much.

When asked for the formula to his success, famed industrialist J. Paul Getty quipped, "Rise early, work hard, strike oil." It's a formula that served Getty well as in 1966 he was named by the Guinness Book of Records as the world's richest private citizen. It's a simplistic formula that has given rise to several other wealthy American oil tycoons over the years, including Harold Hamm. However, as Harold Hamm could probably testify, finding oil is the easy part. The tricky part is keeping all the wealth that's created once oil is struck.

The wildcatter
Harold Hamm's quest for oil began in 1967 when he founded the Shelly Dean Oil Company, which was the predecessor to Continental Resources (CLR 0.61%). Hamm first struck oil a few years later when a wildcat well -- which means a well drilled in an unproven area (or where the wild cats roam) -- in Oklahoma struck oil. That well led to the discovery of the Oswego Oakdale Field, where Hamm was able to drill a number of highly successful oil wells.

Through the years Hamm continued drilling in Oklahoma, making several additional discoveries. He also acquired other oil and gas companies as he built his small oil empire. Along the way his company, which became Continental Trend Resources, decided to focus its exploration drilling in Williston Basin of North Dakota where it would co-discover the prolific Cedar Hills Field. That field turned out to be the seventh largest onshore discovery in the lower 48 states, and it was the first oil field that was developed exclusively through horizontal drilling. However, that field was only the beginning and would turn out to be far from Hamm's biggest find.

The Bakken Shale gusher
While Hamm made a lot of money finding oil over the years, the discovery that really changed his life and his wealth was the Bakken shale of North Dakota. Hamm's company drilled the first commercially successful well in the North Dakota Bakken in 2004 by using a combination of horizontal drilling and fracture stimulation. That discovery turned out to be a game-changer not only for Hamm, but for the entire U.S. oil industry. Continental estimates that this field contains upwards of 20 billion barrels of economically recoverable crude oil, which if proven to be true would grow U.S. proved oil reserves by almost 50%. Hamm's company controls the largest acreage position in that play, which drives the bulk of the value of that company.

How that made Harold Hamm rich
Hamm's wealth lies not only in his ability to find and produce oil, but even more so in the value of the oil company he built. He owns about two-thirds of the outstanding shares in what is now known as Continental Resources, which he took public in 2007. The value of that stock price has risen as Continental has grown its production and reserves, along with an added boost from the price of oil as we see on the following chart. 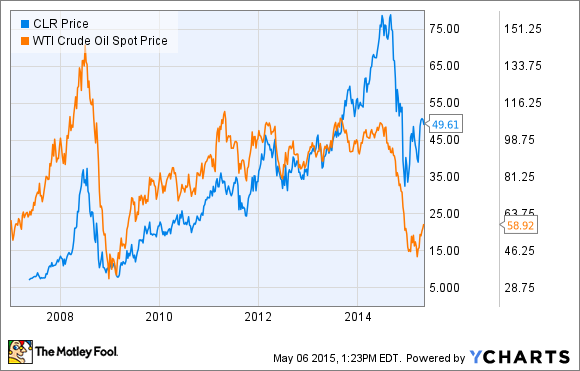 At its peak Harold Hamm's stake in Continental Resources was worth an estimated $20 billion, making him one of the richest oil tycoons in America. However, half of his fortune was recently lost when oil prices turned south in late last year. That said, he could have lost even more.

How oil prices lost, but also saved Hamm billions
In 2012 Harold Hamm's now ex-wife filed for divorce. This was at the time that sky high oil prices pushed his net worth up to that $20 billion mark. His ex-wife, who used to be an executive at Continental, was seeking half of the marital assets, which would have made her one of the country's richest women. However, Hamm contended that his wealth wasn't the result of his efforts, such as rising early, working hard, and striking oil, but instead was the result of pure dumb luck, in which case he'd be entitled to keep nearly all of it.

As "luck" would have it, Hamm was right because what wealth that was given to him by high oil prices leading up to 2012 was vastly reduced by late 2014 as oil prices began to collapse right before the divorce was settled. In the end he sent his ex a check for just under a billion dollars, which she cashed resulting in the settling of the divorce. That allowed Hamm to keep his shares in Continental, which were still worth about $10 billion. So, while falling oil prices cost him $10 billion in wealth, that same collapse saved him from sending half of what was left, or about $5 billion to his ex for a net savings of around $4 billion.

Takeaway
Harold Hamm's story teaches us that amassing great wealth takes a lot of hard work as he clearly followed J. Paul Getty's formula of rising early, working hard, and then striking oil. However, his story also teaches us that sometimes we need to have a bit of luck go our way. In Hamm's case he was pretty lucky with his timing. He took his company public right before oil prices skyrocketed in 2008 and he settled his divorce right after oil prices collapsed in 2014. Through that whole process Hamm made, lost, and kept a whole lot of money.