Please ensure Javascript is enabled for purposes of website accessibility
Log In Help Join The Motley Fool
Free Article Join Over 1 Million Premium Members And Get More In-Depth Stock Guidance and Research
By Daniel B. Kline - May 10, 2015 at 7:32AM

The company, of course, has its own agenda, even if it may be right.

Netflix (NFLX 6.16%) was a leading critic of the failed Comcast (CMCSA 2.10%)/Time Warner Cable (NYSE: TWC) merger, so it should come as no surprise that the streaming video company has come out against the proposed deal for AT&T (T -0.50%) to acquire DirecTV (DTV.DL).

In general Netflix seems opposed to consolidation in the cable and Internet provider business because it gives consumers fewer options, which gives the remaining players increased leverage over competitors. ISPs have great power over streaming services because they can make the experience of using them bad or, in some cases, just less good, and the streamer has little recourse.

In this case, because DirecTV only offers pay TV and is not an Internet service provider, its objections were less obvious. The company clearly does not think so and stated in a brief filed with the Federal Communications Commission, "If approved by the Commission, this merger would result in a combined entity with increased incentive and ability to harm online video distributors ("OVDs") and other edge-based Internet content that Applicants view as a threat to their broadband and video programming businesses."

If that language is not blunt enough, the streaming service was emphatic a little later on. "Netflix urges the Commission to reject the merger as currently proposed."

Netflix has thrown down the gauntlet and taken a stand against this merger. There is, of course, a lot of self-interest in that stance -- just as there was during Comcast/TWC -- but that does not mean the company does not have a point.

What Netflix is saying
Netflix is attempting to show the FCC that AT&T has a history of using its power to undermine rivals and that if it owned DirecTV it would have even more incentive to do that.

Comcast's withdrawal of its merger application means that, if approved, AT&T would become the nation's largest multichannel video programming distributor ("MVPD"). After AT&T's projected broadband investments, it could become the largest ISP as well. These two dynamics create a powerful incentive for AT&T to protect its investment in DIRECTV's bundled programming by using its ability to harm OVDs to prevent or delay cord-cutting and cordshaving.

It also attempts to make the case that AT&T has used its leverage before and there is no reason to believe it would not do so in the future.

AT&T already has a demonstrated ability to harm OVDs by leveraging its control over interconnection to degrade its own customers' access to Netflix's service. AT&T also has shown an interest in using data caps and usage-based pricing methods, which it can apply discriminatorily to advantage its own services. If AT&T is able to slow the development of the OVD industry, either by foreclosing access to broadband customers or imposing discriminatory data caps, AT&T would be able to preserve its market advantage by slowing or even reversing the shift toward competitive online video offering and away from bundled video/broadband offerings.

It's hard to argue that AT&T would at least think about doing that and probably worth noting that the ISP ranks near the bottom of Netflix's most recent ISP Speed Index for both its U-Verse and its slower-speed DSL service. 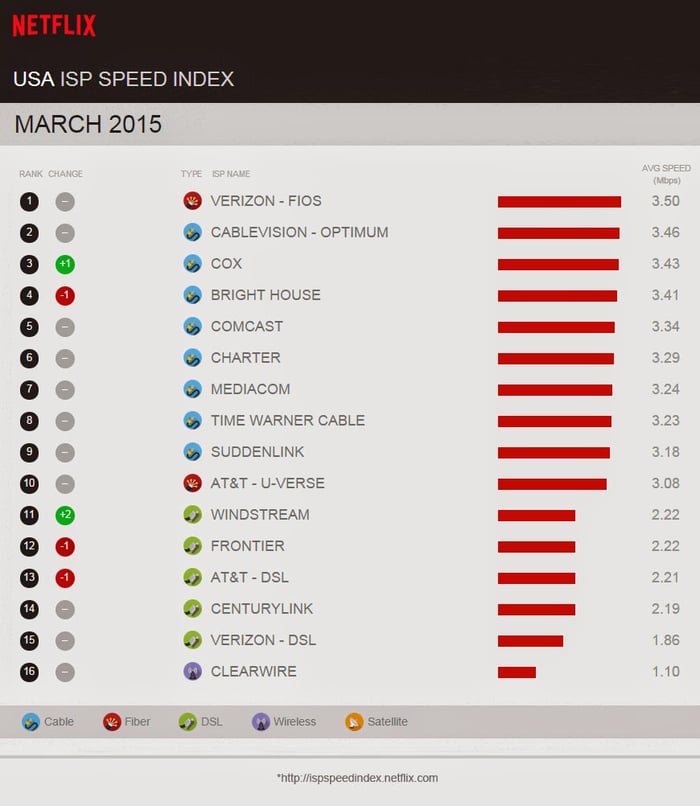 AT&T denies the charges
In response to Netflix's charges, AT&T filed its own brief with the FCC. The heavily redacted document -- which takes out details about the deal where Netflix pays AT&T for a direct network connection to its users -- pushes the idea that the streaming service is objecting solely to support its own agenda.

Before it began pressing for deal conditions in support of its own business agenda, Netflix believed that the merger of AT&T and DIRECTV would benefit online video distributors ("OVDs") and their customers. Indeed, shortly after the transaction was announced last year, Netflix's CFO publicly stated that this deal is a "plus for Netflix." Now, however, Netflix continues to insist that it will be harmed unless the Commission prohibits AT&T (and only AT&T) from charging content providers that seek to connect to AT&T's network.

The document also points out that the two companies have a long-term agreement "for direct access to AT&T's network on terms that will allow Netflix to continue to thrive in the marketplace."

It's a little bit in the middle
Netflix has made deals like the one it has with AT&T with its teeth gritted while being very public that it does not think it should have to pay for this type of access. The streaming service has done so only to avoid bad user experiences for its subscribers.

AT&T, on the other hand, is wrong to deny the idea that it uses its standing in the market to make the best deals possible for itself. Streaming services are a direct threat to the current pay-television model, and it's silly for the company to pretend that it welcomes them with open arms.

If the FCC allows this merger to proceed, it should do so with conditions that guarantee fair treatment for not only Netflix, but all streaming services and cord cutting options. AT&T and Netflix are out to support their own goals and it's the federal agency's job to see that the needs of the public are protected.