Can the department store operator fool the pros yet again? It's quite possible.

The turnaround at J.C. Penney (JCPN.Q) remains largely on track, despite a hiccup or two. But bringing any company back from the brink of bankruptcy is no easy task, and hardly anyone expected the path to be smooth.

Yet Wall Street continues to underestimate the ability of the retailer to actually perform as well as it needs, allowing J.C. Penney to surprise analysts time and again. With the department store chain's stock up more than 30% so far in 2015 and over 40% higher from its low point last December, analysts are once again forecasting it will perform below expectations. 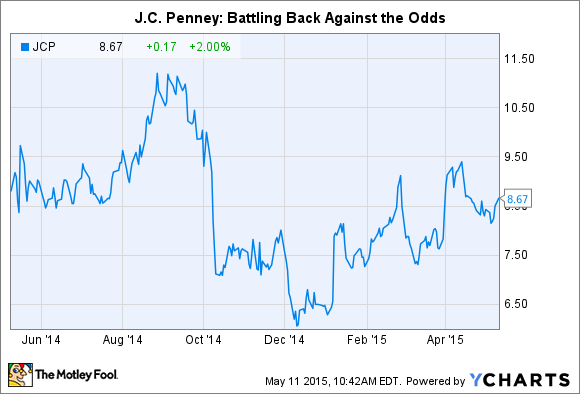 It must hit the numbers that it leaked
By it's own account, J.C. Penney is having a great first quarter. Last month it accidentally divulged to an analyst just how strong sales were going in the first quarter. At the time comparable sales were running 6% higher over the year ago period, which was about twice as much as what analysts were expecting.

But taking into account the Easter holiday shift, J.C. Penney's said it was ultimately expecting comps to grow 3.5% to 4.5% by the quarter's end. So it's key for the retailer to at least hit those numbers.

Wall Street was already unimpressed with the higher than expected numbers because they say if it's turnaround is really going to gain traction it needs to accelerate sales even more. It's a case of "what have you done for me lately" -- again -- and even though the retailer is doing better than they thought, they're not willing to give it credit where it's due.

Comp sales strengthen
It's all in getting the customer to return to the store. So far J.C. Penney has effectively used its "center core" of beauty care provider Sephora and its fine jewelry department to lure customers back in. Once there, they've proven willing to shop elsewhere in the store, and the retailer has been rolling out more store-in-store boutiques to leverage their popularity. 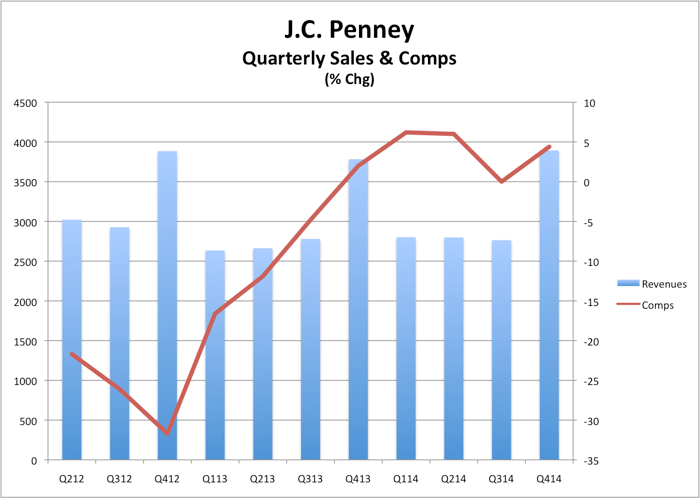 As is seen in the chart, J.C. Penney has enjoyed a remarkable bounce from the disastrous policies instituted by former CEO Ron Johnson. However well-intentioned and logical his thought process was, an old-line retailer like J.C. Penney is not the same as a modern tech giant like Apple and the two can't be marketed as such.

Jettisoning many of the failed ideas has allowed J.C. Penney to win back the customers that left in droves during Johnson's tenure, and building out its most successful ideas ought to help it continue on that path.

Easy numbers made
Yet it's true the chart also highlights one of the biggest risks analysts point to: J.C. Penney leapt over the hurdle last year in such fine fashion because the bar had been set so low. Now that the easy money has been made and many of those fleeing customers returned, it's only managed to get back to square one.

Ron Johnson was trying out those dramatic and innovative ideas precisely because J.C. Penney was failing beforehand. Interim CEO Mike Ullman had actually presided over the decline in the retailer from its heights, and the situation was already worsening when Johnson stepped in.

While Johnson's policies may have hastened J.C. Penney's turn into a debacle, the retailer still needs to figure out how to grow sales in a hyper competitive marketplace going forward. Consumers have so many shopping choices available to them, including Macy's, Kohl's, and Amazon.com that it may not be enough to simply regain its footing. It may also have to take off at a sprint.

To do so it will need to show that the plans it laid out for improving sales at its online store, its home department, and with furniture are working. Look for whether a Bassett shop in the furniture department, for example, is gaining traction to gauge whether it can be successful.

What it means for investors
And that's why Wall Street is persistently negative with its outlook on J.C. Penney. Cauterizing the hemorrhaging was one thing; becoming a healthy, vibrant retailer again is another.

So far J.C. Penney has managed to prove Wall Street wrong often enough that I wouldn't be surprised to see it actually beat the high estimates it recently gave. The retailer seems to have its finger more firmly attuned to the pulse of the consumer, which could translate into a rapidly rising stock.

Why Figs Stock Was Up This Week