Please ensure Javascript is enabled for purposes of website accessibility
Log In Help Join The Motley Fool
Free Article Join Over 1 Million Premium Members And Get More In-Depth Stock Guidance and Research
By Beth McKenna – May 11, 2015 at 3:19PM

Stratasys (SSYS -3.18%) reported its official first-quarter 2015 results before the market opened on Monday, May 11. Going into the release, investors knew that both the headline numbers and 2015 guidance were going to be disappointing. That's because on April 28, the leading 3D printing company released preliminary results that fell short of analysts' estimates, and lowered its 2015 revenue and earnings guidance.

Shares traded up in the 2% range most of the morning. That's likely because adjusted earnings came in at the high end of the preliminary range and there was some good news, particularly related to consumables. The market appears to be shrugging off the fact that Stratasys again lowered its 2015 guidance for generally accepted accounting principles earnings.

The big picture
Stratasys grew revenue 14% year over year to $172.7 million, including organic growth of 1%, or 6% on a constant-currency basis. The company turned a profit of $0.04 per share on a non-GAAP basis, and lost $4.24 per share on a GAAP basis.

We knew from the pre-announcement that several factors contributed to the revenue shortfall, most notably a decline in capital spending among certain industries, particularly in North America; the negative impact from a strong U.S. dollar (which came in at $7.8 million); the slower than expected adoption of the high-end Connex products because of the introduction of eight new products within this line in the second half of 2014; and slower than expected channel ramp up in certain parts of the Asia-Pacific and Japan region.

Stratasys CEO David Reis and CFO Erez Simha didn't say anything notable on the conference call about the capital spending environment. It seems likely the slowdown was fairly broad-based across industries. Understandably, Reis said it was too soon to tell how things were looking on this front in the second quarter.

MakerBot's continued woes
The preliminary results showed that MakerBot's year-over-year revenue fell about 18%, and that Stratasys planned to take another goodwill impairment charge against earnings for the desktop 3D printer maker. That $194 million charge equates to $3.81 per share.

During the earnings conference call, management said Stratasys now expects MakerBot's 2015 revenue to be down roughly 25% to 30%. However, Reis reiterated that MakerBot's growth rates are expected to ramp up to, or exceed, overall company averages by 2016. 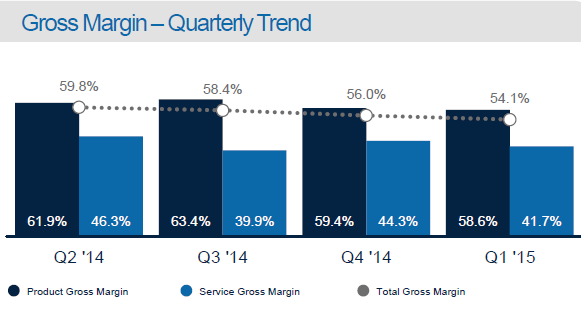 The company should include five rolling quarters in the chart above because it's usually important to look at year-over-year comparisons, not just sequential ones. In first-quarter 2014, the company's gross margin was 60.9% -- 63.5% for product and 45.8% for service.

Stratasys attributed its gross margin decline primarily due to the change in product mix, as well as the impact of acquisitions and the decline in capacity utilization at MakerBot. The product mix slanted more toward lower-margin products, particularly in the Connex line, based on the introduction of new products to this platform in the second half of 2014.

The good news is that the company sees no notable drops in product average selling prices.

The down trend in gross margin due to the changing product mix shouldn't surprise investors who have been closely following this company. There are two factors at play here: MakerBot's gross margin is somewhat less than the company's average margin, so MakerBot has been exerting downward pressure on the product gross margin since being acquired by Stratasys in mid-2013. Second, Stratasys' 3D-printing service business sports a lower gross margin than does its product business, and this business grew revenue faster than the product business in the last two quarters. That's because of the Solid Concepts and Harvest Technologies acquisitions in the third quarter of last year.

Bright spots: consumables and customer support
Simha said during the call that quarterly revenue from consumables (materials) grew 18% over the same period last year, or 25% on a constant-currency basis. Growth was driven not only by the company's expanding installed base of systems, but also by increased system utilization.

Simha also said that within service revenue -- which grew by 112% due largely to acquisitions -- customer support revenue increased by 28%. This is revenue generated mainly by maintenance contracts on the company's 3D printers.

I agree with Simha's take:

Despite the challenges our Company faced due to market softness, we believe that our material and customer service sales successfully demonstrated how our business model can continue to generate recurring revenue from the installed base, even in a period of slower than expected industry growth.

Looking ahead
The company reiterated the revenue and adjusted profit portions of its 2015 guidance, but once again pushed down its expectations for GAAP profit.

Final thoughts
It goes without saying that quarterly revenue growth of 14% and projected annual revenue growth of approximately 11% are unquestionably disappointing in light of the 3D printing industry's robust current and projected growth rates. That said, investors can take some comfort in the fact that the quarterly slowdown on the enterprise-focused end of the business seems an industrywide phenomenon -- fellow leader 3D Systems also struggled in this space in the quarter.

There will always be bumps in the road even for established leaders in a fast-growing industry. In Stratasys' case, one primary bump was its own missteps (overpaying for MakerBot), while another was a factor beyond its control (the economic environment).

Positively, the company sees no indications that enterprise customers are delaying purchases to wait to see what competitive offerings from new entrants are on the horizon for 2016, and Stratasys' solid material and customer service revenue growth show how its razor-and-blade-like business model can successfully generate recurring revenue.