Netflix (NASDAQ:NFLX) stock has had a pretty solid rise since the Qwikster debacle of 2011.

That misguided attempt to split the company's DVD rental business from its streaming video operation caused its stock to crater. The stock, which was trading over $260 a share in July 2011 fell to just over $130 in late-September of that year. It did not cross $200 until April 2012 -- nearly two years later. But from that point it has been steadily climbing, closing out the week which ended on May 7, 2015 at nearly $575. 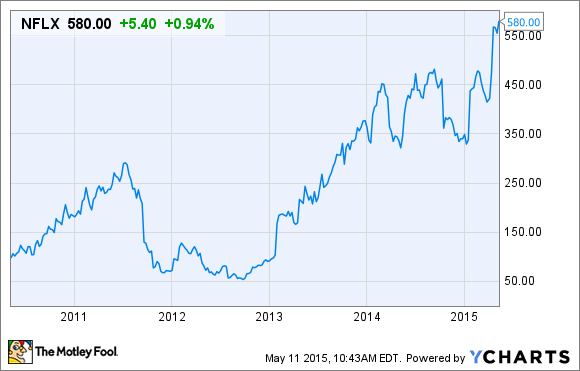 It has been a good run with Netflix closing out its most recent quarter with 59.62 million paid subscribers. That's a gain of over 5 million from the previous quarter and the company predicts it will end the next quarter with 62.47 million paying members. Revenue has shown a similarly positive arc growing from $1.06 billion in Q1, 2014 to $1.4 billion in the first quarter of 2015 with further growth to $1.47 expected in Q2.

Netflix has been steadily increasing its stock price, but it might be time for stockholders to cash out and take their profit. It's not that the company will collapse or that it won't hit its subscriber or revenue goals, but the streaming service is facing increased competition which could drive content costs higher. It's also bidding against more people in the digital (and broadcast) video space for potential hits which may be much harder to come by in a fragmenting universe.

Competition is getting intense
Netflix once had the world of streaming original content all to itself and now it faces competition from Hulu, Amazon.com (NASDAQ:AMZN) Prime Instant Video, Yahoo Screen, and a number of niche players like Sony's Crackle. In addition, you can argue that the company is competing for prestige products and the most-esteemed show creators with cable outlets including AMC Networks, Starz, Showtime, and, of course, HBO, which now has a Netflix-like streaming service.

All of the outlets named above have had some level of hit with original programming (though the word "hit" is very open to interpretation). With so many players on the field, Netflix can no longer woo top creators simply with the promise of being hands off. Now, for truly top-tier content, the company must also outbid its competition -- some of which has a similar reputation as being a good place for talent to work.

House of Cards, for example, has become one of the streaming service's biggest hits. That project was won in a bidding war over HBO and AMC, according to Deadline.com, which noted the importance of the deal at the time.

Netflix landed the drama project by offering a staggering commitment of two seasons, or 26 episodes. Given that the price tag for a high-end drama is in the $4 million-$6 million an episode range and that a launch of a big original series commands tens of millions of dollars for promotion, the deal is believed to be worth more than $100 million and could change the way people consume TV shows.

That deal paid off and Netflix has had a tremendous track record, but with so many players now on the field and more likely to enter it, the company's batting average is almost sure to decline.

Netflix is not only facing bidding wars and increased competition on originals, it's also coming up against it on reruns of popular shows. The company recently lost out on Seinfeld reruns, which were snapped up by Hulu in a $160 million deal (about $875,000 per episode), Variety reported.

Netflix needs content and content is expensive
To keep its subscribers happy Netflix needs to keep its pipelines stocked with original programming that people want to see and a mix of movies and older TV shows as well. That's a challenge and the company has little room to falter when you have competitors like Amazon which is essentially not charging for its premium video and essentially giving it to subscribers as an add-on with the Prime free-shipping deal.

Netflix has told its shareholders that "our plan is to run around break-even globally through 2016, and to then deliver material global profits in 2017 and beyond." That sounds nice, but it only happens if the company continues to grow it subscriber base and hold content costs in check.

That seems especially difficult for the company to do given the added competition. Netflix has not experienced spending House of Card money on a show that fails to connect. That could happen with the creative base getting stretched thin and more players fighting for content.

Netflix still has very strong long-term prospects, but it may be worth more now than it will be over what could be a bumpy next few years. That could make this the time to take your profits if you're not willing to wait and see the company through its next phase of evolution.