Please ensure Javascript is enabled for purposes of website accessibility
Free Article Join Over 1 Million Premium Members And Get More In-Depth Stock Guidance and Research
By Rich Duprey - May 11, 2015 at 7:20PM

Offering merchandise at a discount seems an easy way to generate sales. Perhaps it's too easy

Does Macy's ( M -3.25% ) understand its customers' needs, or is it setting itself up to cannibalize sales?

Macy's is opening four new off-price concept stores, which on the surface indicates it has a bead on the thinking of financially strapped consumers who continue looking for the best deals on price, but these test stores also run the risk of siphoning off customers from its full-price department stores and could position the chain for further trouble

Off-price and off target?
No doubt Macy's compared its own results last year to those of rivals like Nordstrom ( JWN -1.80% ) Rack, Ross Stores ( ROST -0.34% ), and TJX ( TJX 0.63% ) only to find itself lacking. Sales across the year and in the fourth quarter that includes the all-important holiday shopping season were anemic compared to the competition. Even troubled retailer J.C. Penney ( JCPN.Q ) had a better outing than did Macy's.

Yet by focusing on the success of the off-price retailers and ignoring the very real risks associated with competing against yourself indicates it may be turning a blind eye to the problems such a course brings. One need only look at how handbag maker Coach ( TPR -0.32% ) is faring to see what happens when you undercut your own prices.

Without question the off-price retailers are enjoying a fair bit of success. Just look at how their performance stacked up against Macy's last year:

And even when including the departments Macy's licenses to third parties, the results were hardly any better: comparable sales were just 1.4% and 2.5% for the year and fourth quarter, respectively.

Backstage pass
The new off-price concept stores, which management hinted at pursuing earlier this year on its end-of-year earnings conference call, will be called Macy's Backstage, and will launch in the hypercompetitive New York-area market.

Macy's says it's built these stores from the ground up, and will feature name brand and private label merchandise designed specifically for the stores. That separates it from the outlet stores like those Nordstrom operates or even its own Bloomingdales does. Instead it will be more like traditional off-price retail stores like T.J. Maxx, Marshall's, and Ross.

A teachable moment
And that's where the risks arise. First, it's a whole new business model for Macy's and it's in a market with well-established competition. While it believes it has the marketing capabilities to overcome such hurdles, Coach provides a lesson for what can happen when you establish a discount retail presence a bit too successfully.

Between fiscal year 2009 and 2013, the handbag maker grew the number of factory stores it operated by 71%, from 121 stores to 207, and doubled the available square footage occupied by such outlets to more than 1.1 million square feet. It increasingly created more products specifically for its outlet stores to keep customers coming back and said it expected square footage to continue growing in the years ahead.

At the same time, the number of full-price retail stores began to decline. Coach went from 342 retail locations in fiscal 2010 to 354 in 2011, but then full-price store closures caused them to shrink to 332 last year.

And then the bottom dropped out. Not that Coach wasn't making sales in its factory stores, but rather it was making too many. The off-price channel was gutting profits. Coach recognized only too late that consumers figured out they could get the same Coach cachet at less than full price. 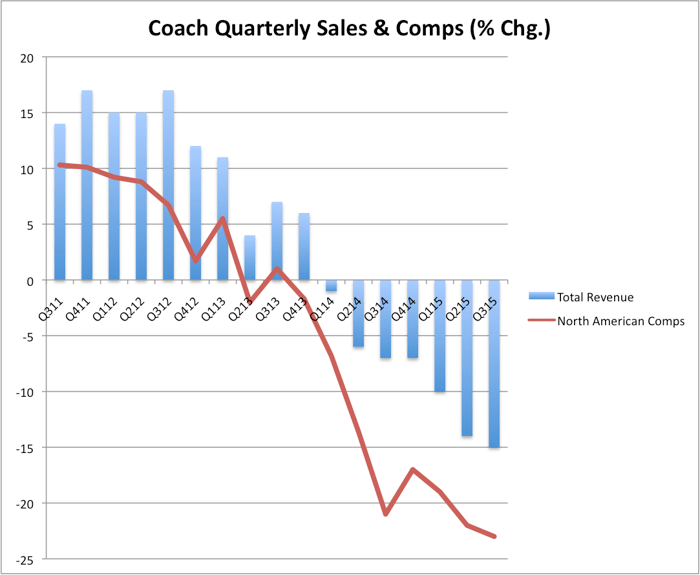 Going off half-cocked on half off
Sales and margins went into free fall, and it was forced to virtually eliminate sales events at the outlet stores, limit access to the outlet website, and to shutter dozens of outlet stores. In the first three quarters of fiscal 2014, Coach closed down an additional 12 outlets, and since the end of the third quarter, it's closed a net of four additional outlet stores, including 11 men's outlet stores.

Nordstrom may soon run into similar problems. While its Rack stores are performing well, company gross profits slipped 53 basis points in the fourth quarter because of the influence the off-price channel had on its operations, along with a near-identical slide for the full year. With the retailer planning on opening even more Nordstrom Rack stores in the immediate future, profits may be pinched even further.

Limited time offer?
Macy's can't afford to let its profits slip any further. Margins fell across the board last year, and as noted previously, it's been battling a resurgent J.C. Penney, which has gained sales and recovered at least some of the market share it previously lost. Now Macy's will have a whole new category of competition.

Macy's off-price experiment is fortunately limited in scope. The real risk is that it will view the experiment as a success, much like Nordstrom and Coach did, and will expand the scope of the trial, only to realize too late it really just cannibalizes sales.

For Macy's stock that has performed so well over the past 1-, 3-, and 5-year periods, it may be more than just clothes that investors will pay less than full price for soon.