That was quick. Apple (NASDAQ:AAPL) has been doing business in the U.S. for nearly four decades. China? Not so much.

Yet, with the Mac maker's most recent blowout earnings release, the company quietly surpassed an interesting milestone: Apple now generates half as much revenue in Greater China as it does in the U.S. That's quite a feat considering how relatively young Apple's operations in the Middle Kingdom are.

Better yet, it's a spoiler alert for what's to come.

There's more where that came from
Over the past four quarters, Apple generated $45.5 billion in revenue in its Greater China operating segment. That's a hair over half of the $89.2 billion in revenue that it's brought in stateside. 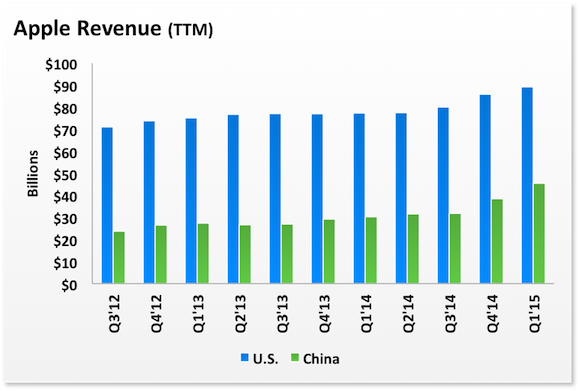 Framed another way, here's how quickly Apple's China revenue has been catching up with U.S. revenue in relative terms. 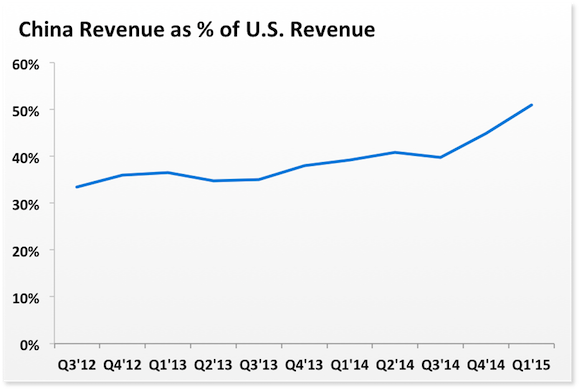 We're talking about a geographical segment where Apple hadn't really started trying in earnest until five years ago. For context, in all of fiscal 2009, Apple's Greater China revenue including retail operations totaled less than $900 million. Fiscal 2014 saw that figure climb to $31.9 billion, for 37-fold growth in five years.

Why ask why
A booming middle class complemented with strategies catered directly for the Chinese market have helped Apple significantly grow its position in China in a relatively short period of time. Apple has successfully positioned itself as a luxury lifestyle brand, and its strategy of prioritizing localized content and partnerships to make Chinese consumers feel at home with their iOS devices has been particularly effective. For example, consider Apple's gold-colored iPhones, which have been hugely popular in China. The company's decision to offer the device in gold probably had a lot to do with the fact that Chinese consumers love gold. (In fact, the country overtook India as the world's largest consumer of gold in 2013.)

Meanwhile, phablets are especially popular in China, which was an obvious catalyst for Apple introducing the iPhone 6 and 6 Plus, as the company watched Android rivals succeed with larger smartphones. Unlike other U.S. tech giants that face challenges offering software and services (such as Google or Microsoft), Chinese consumers snap up Apple's hardware.

Retail expansion, finally
Apple has finally gotten around to its retail expansion plans in the region as well. The company dragged its feet with opening retail stores for years, but it has now picked up the pace. The company now has 21 stores in 11 cities and is on pace to reach its stated goal of 40 stores by mid-2016.

That's not all. Apple's online store for direct sales is also booming in China. Online revenue jumped threefold last quarter, and Apple intends on growing the number of stores where it can achieve two-day delivery from 319 to 365.

Speaking of strategies targeting China
In fact, I'd even argue that Apple's pricing strategy with Apple Watch Edition targets China too. As the middle class grows, so does the upper class. This group of consumers highly values luxury fashion items and is willing to pay up for them. Why else would you pay over $20,000 (pricing in China includes a value added tax) for a model that offers no greater performance than the entry-level model?

Indeed, the initial batch of Apple Watch Edition models sold out in China in under an hour when the forthcoming wearable became available for pre-order last month.

Apple's China business may now be half of its U.S. business, but Apple's just getting started.

Apple's China Business Is Already Half As Big As Its U.S. Business @themotleyfool #stocks $AAPL Next Article
Current