Kinder Morgan (NYSE:KMI) is one of my favorite high-yield dividend growth stocks and a major reason for this is because of how well it's been able to handle the oil crash. Let's look at five key facts from Kinder's recent conference call that show why the company is likely to thrive even in a world of lower energy prices.

Energy price volatility is just the name of the game in the oil and gas industr. Times of industry distress help to let truly exceptional companies stand out, and the fact is that Kinder Morgan is still managing strong growth.

"Our natural gas transportation volumes were up 6%; our refined products volumes were up 5.6%. Our condensate volumes more than tripled. Our net oil production and our CO2 segment was up 9%. And our liquids throughput in our terminals group was up 23%."-- Richard Kinder

"We continue to see strong demand for long-term firm natural gas transport capacity. We added another 600 million [cubic feet of natural gas] a day of transport commitments during the quarter, with a volume-weighted average term length of 13.5 years. ... that brings the total that we've signed up since December of 2013 to 7.3 DCF [dry cubic feet] of new and pending commitments, with an average term length of almost 17 years."
-- Steve Kean, COO and future CEO

To put this accomplishment into perspective, over the Past five quarters Kinder Morgan has locked down additional gas transportation demand equivalent to almost 10% of all current U.S. natural gas production, ensuring substantial additional predictable cash flow for almost the next two decades. 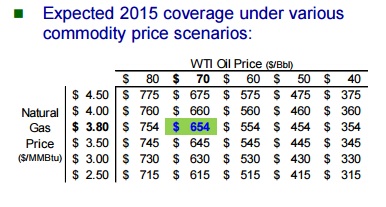 Note that "coverage" means excess distributable cash flow, or DCF, after covering 2015's $2 dividend. This might allow it to potentially beat its 10% dividend growth target -- which Richard Kinder says remains on track -- through 2020.

Kinder investors should be aware, however, that according to Dang, the company's excess DCF isn't evenly generated throughout the year. Rather, Q1 and Q4 usually represent the strongest periods of excess coverage, while Q2 may actually fall short of covering the dividend.

"We also made a methodology change, and we're moving overhead now. So our backlog currently -- including capitalized overhead and the capital portion of the backlog and in the capex in the backlog, and we'll consistently state it this way going forward -- so our backlog now stands at $18.3 billion. The reason we're including overhead is capitalized overhead is included when we make the investment decision. It's in our return calculations. And when we give you guys indications of returns or EBITDA multiples on investments, we're typically giving those with overhead included." -- Steve Kean

Basically, what this means is that Kinder wanted to improve its transparency by reporting its backlog the same way it calculates its return on investment for potential projects.

Speaking of the backlog, remember that even though the backlog shrank by $500 million over the past two quarters -- because of the removal of $1.685 billion in CO2 oil projects -- these projects have only been delayed and shunted into the company's "shadow backlog," which, according to natural gas President Tom Martin, now stands around $19.2 billion.

Bottom line: The oil crash hurts Kinder in the short term, but long-term growth remains intact
The fact that Kinder Morgan is able to navigate the worst oil crash since the financial crisis while still generating substantial excess DCF and growing its long-term contract secured cash flow shows the superior nature of its business model, and why it remains one of America's best dividend growth stocks.