Please ensure Javascript is enabled for purposes of website accessibility
Log In Help Join The Motley Fool
Free Article Join Over 1 Million Premium Members And Get More In-Depth Stock Guidance and Research
By Reuben Gregg Brewer - May 12, 2015 at 6:11AM

There's still more room for costs to go down in the oil business, according to this diversified giant.

BHP Billiton (NYSE: BHP) CEO Andrew Mackenzie has been around the oil industry for a long time. And the difficult market we see today isn't unique. According to the CEO, "[O]ver my 30-year career, there have been three occasions when the oil price has fallen more than 50 per cent in less than six months -- a 'crisis,' on average, once every 10 years." Taking a long-term view, he still thinks there's plenty of improvement to be made in oil to help BHP weather this downturn and prepare for the next upturn.

Now that hurts
Between June and December last year, the price BHP realized for oil fell from $102 per barrel to $85. That's a 17% drop. Despite oil's recent uptick, black gold is trading below $85 a barrel, so BHP's realized price is likely to continue to drift lower through the end of its fiscal year in June. That's a problem on the revenue side of the equation. But, as Mackenzie points out, "Those of us who have been in oil and gas for some time know that it has always been a volatile industry." 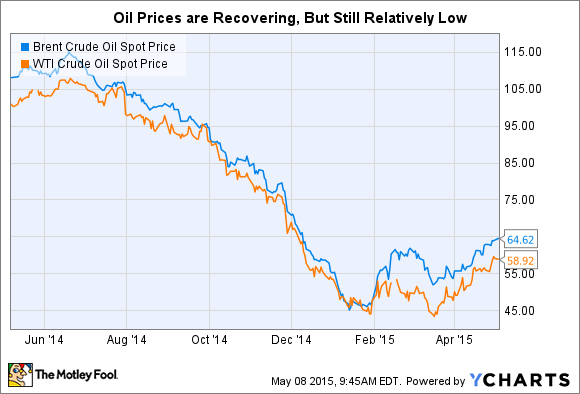 That's why BHP is continuing to take a long-term view. For example, the company cut its onshore U.S. rig count by 35% between December and March. The company believes that "deferring development will create more value than producing today." Put another way, it wants to leave oil in the ground until prices are higher. That said, oil production was up 6% in the first nine months of BHP's fiscal year. So it's pulling back, but production hasn't stalled.

Taking charge
This is exactly what Mackenzie meant when he recently told a European oil gathering, "For our industry to be successful, we must take matters into our own hands. Better productivity is the biggest opportunity we have to improve profitability." Where does that come from? Doing more with less.

Within the U.S. onshore segment of the company's oil business, for example, that meant an 8% drop in the cash cost of oil in the first six months of BHP's fiscal year. Put into dollars and cents, existing and operating wells can spit out oil for around $11.15 a barrel. That makes them profitable even at today's low oil prices, which helps protect current profit margins. But it will also make them even more profitable than they were before when oil prices move higher again.

But there's more to be done, too. According to the CEO, "We have found that many small, incremental steps add up to a major increase in efficiency. It's all about doing the simple things better." Even the mundane is important: "Take maintenance -- a major component of costs in both mining and oil and gas. By applying a benchmark to common activities across our assets, we have identified and shared best practice which has led to more uptime, lower costs and an [energized] workforce." This type of focus has helped BHP increase the "cost efficiency of our operations and capital investments by over 30 per cent" since 2012. 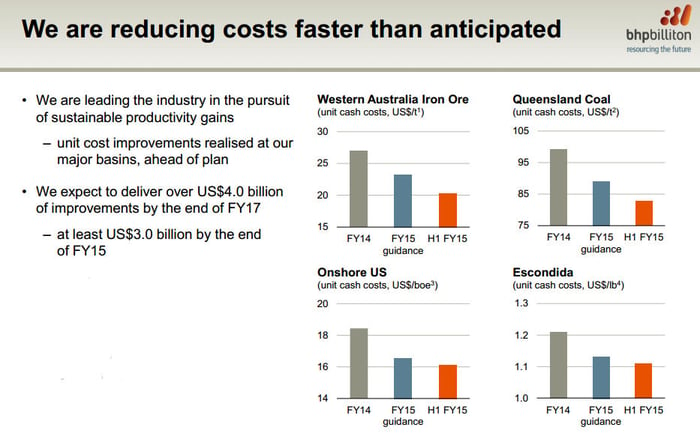 Cutting costs across the board. Source: BHP Billiton

Still working hard
Although that 30% figure is across the entire company, the point is pretty clear. BHP is focused on squeezing more out of its operations. And so far, anyway, it's doing a good job of it -- including in the oil segment of its business. The intermediate steps may seem small, but the long-term benefit adds up over time. And, at least in oil, slowing down on new drilling will likely put an even greater emphasis on reducing costs at existing operations. Note, however, that BHP hasn't stopped drilling, it's just slowing down and working on improving its efficiency.

An oil "crisis," as Mackenzie calls them, is a scary thing when you are in one. There's no way to sugar coat a 50% drop in oil prices. But that's far from a doomsday scenario for operators that can look long term and adjust accordingly. For BHP that means slowing down on drilling new wells and reducing its operating costs at existing wells. And both will position it to make more money when oil prices rise again.