Please ensure Javascript is enabled for purposes of website accessibility
Log In Help Join The Motley Fool
Free Article Join Over 1 Million Premium Members And Get More In-Depth Stock Guidance and Research
By Sean Williams - May 14, 2015 at 9:04AM

A strong dollar might have put a smile on the face of the U.S. consumer, but it generally means bad news for pharmaceutical stocks. 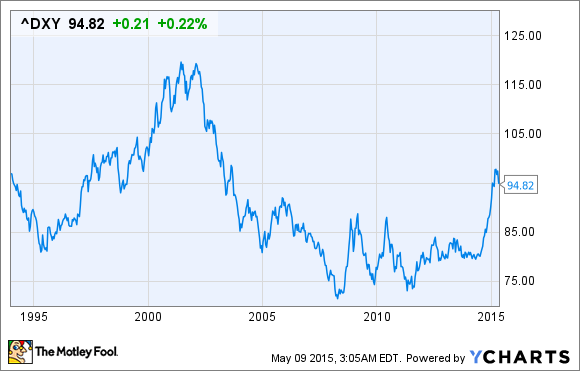 The U.S. dollar has been an absolute marvel for the U.S. consumer over the past four years. Since the U.S. Dollar Index hit a 2011 low of 73.50, it's pretty much been in non-stop rally mode, cresting the 100 mark very briefly in March for the first time in 12 years.

A strengthening U.S. dollar tends to put a smile on the face of U.S. consumers because it means they have more purchasing power when vacationing in overseas markets. It also allows for U.S. businesses to import more since their dollar is worth more against the euro, pound, and other major overseas currencies.

A strong dollar is bad news for U.S. multinationals
Investors, on the other hand, haven't been as fond of the precipitous rise in the U.S. dollar.

One of the most basic fundamentals of stock research is that the more diversified a business is geographically, the better chance it has of succeeding. Think about it: Wouldn't you want the stocks you own to have access to rapidly growing emerging markets like China, India, and Brazil, while also having a strong presence in developed markets such as North America and Europe, where the beefiest margins can be made?

Unfortunately, the principals of geographic diversification get turned upside down when the U.S. dollar is strengthening. Instead of U.S. multinational businesses prospering from geographic diversification, they get punished if they generate a significant portion of their sales in overseas markets. That's because multinational companies report their earnings in U.S. dollars, but they're generating revenue in overseas markets, where the U.S. dollar isn't the standard currency. It means multinationals have no choice but to convert their foreign currency back into dollars before the end of the quarter. As the dollar has strengthened, it's meant the loss of revenue and, subsequently profits, in the process.

Pfizer (PFE -1.83%), one of the largest pharmaceutical companies in the world by total revenue, is getting shellacked by foreign currency translation. In January, when Pfizer issued its 2015 full-year forecast, it estimated that the negative impact of foreign currency would be $2.8 billon against revenue and $0.17 per share against its adjusted EPS. Following the release of its first-quarter results, and an even stronger dollar, Pfizer reduced its full-year guidance by another $500 million at the midpoint and shaved $0.03 more off of its EPS for the year. For added context, $6.43 billion of Pfizer's $10.86 billion in Q1 revenue came from international markets.

Things aren't much better with rival Merck (MRK -0.09%). In its recently released first-quarter results, the company reiterated its prior guidance of $38.3 billion to $39.8 billion in revenue, which includes a $2.8 billion negative effect from foreign currency translation. Its adjusted EPS estimate was narrowed to a range of $3.35 to $3.48, which includes a negative impact of $0.27 per share from a stronger dollar.

These big pharma names have partially escaped the strong dollar woes
Although the euro and British pound have been weak in relation to the U.S. dollar, the easiest way to avoid the nasty effects of foreign currency translation has been to latch on to European-based pharmaceutical stocks.

Take rare disease drug developer Shire (NASDAQ: SHPG), which is based in Ireland, as a good example. Its first-quarter results featured a 9% increase in total revenue to $1.49 billion as adjusted EPS moved higher by a more robust 20% to $2.84. However, on a constant currency basis, Shire's revenue would have grown by 13%, with adjusted EPS growth of 24%. Shire shareholders are still seeing a hit, but not to the same extent as, say, Pfizer or Merck. Looking ahead the company forecast a low- to mid-single-digit hit from currency volatility for the remainder of fiscal 2015.

Currency fluctuations were practically unnoticeable for U.K.-based GlaxoSmithKline (NYSE: GSK) which generated 5.62 billion pounds in revenue in its latest quarter, essentially flat year over year. When foreign currency translation is factored in, Glaxo's revenue would have risen a percentage point. For the remainder of the year, GlaxoSmithKline cautioned investors to expect currency to impact its results by low- to mid-single-digits.

An important point to remember
Although a stronger dollar is undoubtedly having a negative effect on pharmaceutical stocks, it's also important that investors understand currency fluctuations are uncontrollable and unavoidable. It's therefore in your best interest as a long term investor to take them out of the equation and compare big pharma operations on an apples-to-apples basis.

The negative effect from a stronger dollar on multinational pharmaceutical stocks would only be critical if those stocks were narrowly cash flow positive, or deeply in debt. None of the companies in big pharma meet this criteria, meaning a stronger dollar, while a nuisance and a driver of short-term emotions from traders, is hardly a "black swan" factor that could sack the pharmaceutical sector.

If the dollar gains another 20%, I may have to re-evaluate my aforementioned statement, as well as pharmaceutical valuations, but for the time being, your best course of action is to analyze the operational strength of pharmaceutical companies, and not get caught up in the strong dollar hype that's pervasive throughout Wall Street.