Adam Galas, Tyler Crowe, and Matthew DiLallo
(AdamGalas)
Author Bio
Adam Galas is an energy writer for The Motley Fool and a retired Army Medical Services Officer. After serving his country in the global war on terror, he has come home to serve investors by teaching them how to invest better in order to achieve their financial dreams. Follow @adamgalas1 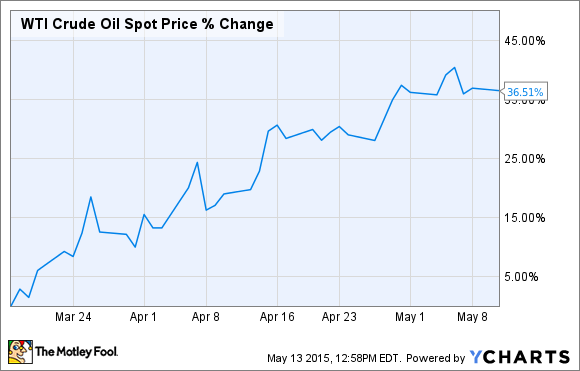 With oil prices rising so ferociously over the past two months, many investors are wondering whether the oil crash is finally over. While no one can accurately predict whether this rally will prove to have legs or not, at some point America's shale oil industry will recover. We asked three of our energy contributors which oil stocks were most likely to prove winning long-term investments when it does.

Adam Galas: I have no idea when oil will truly turn around, but when it does I know that I want to own as much of the frac sand MLP Emerge Energy Services (NYSE: EMES) as I can, for two main reasons.

First, the long-term growth thesis for the MLP is incredibly strong. Frac sand is one of the best, and cheapest, ways for oil producers to increase the production, and thus the profitability, of their wells.

In fact, as this image from fellow frac sand producer Hi-Crush Partners shows, even during the oil crash frac sand usage per well has been on the upswing.

The latest drilling techniques require much more sand than older methods -- up to 15,000 tons per well -- and the energy analyst firm IHS estimates there are 2,500 to 3,500 incomplete wells in the US, while Bloomberg estimates that 50,000 old wells are eligible for an ultra low cost way of increasing production called refracking.

With a possible 53,500 wells needing several kilotons of sand each, you can see why I'm so bullish on the long-term prospects of this industry once oil prices rebound.

The second reason I like Emerge, especially at today's prices, is because the stock recently took a brutal 30% clobbering when management announced it was cutting its distribution by 29% for the coming quarter, and issued 2015 distribution guidance that was 47% lower than last year's payout.

Emerge is a variable distribution MLP, so it pays out 100% of its distributable cash flow each quarter. Thus its payout will be volatile, something many investors may not realize if they don't research how it manages its distributions. With the oil crash causing U.S. rig counts to plunge, I was expecting a large distribution cut, and hoping for a major market over-reaction, which has now occurred.

With a yield of 8.2% for the current year's payout guidance, I'm perfectly happy to patiently wait and collect my fat distributions. However, I think this new guidance may prove too conservative, so I see some potential upside -- both in terms of a higher payout and a possible bump in the unit price for any pleasant distribution surprises that might arise when crude eventually recovers.

Tyler Crowe: One group of companies that has particularly taken it on the chin has been those that own and lease land rigs. After all, what would you expect when total rig count has declined by 52%? That means there are a lot of rigs out of work. But one company that hasn't been as deeply affected has been Helmerich & Payne (NYSE:HP). Management expects that the upcoming quarters will continue to be a little rough as average day rates across the U.S. continue to fall and the company's U.S. land rig utilization rate declines to 49%. However, even with less than stellar numbers the company is still generating strong returns, and has maintained a stellar balance sheet with more cash on the books than long term debt.(NYSE:HP) 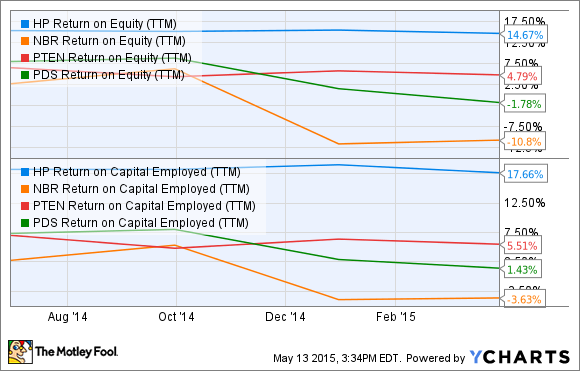 One thing that suggests the company will do extremely well in the event of a turnaround in the American oil market -- especially in comparison to its peers -- is that H&P has continued to build its fleet of land rigs such that they are capable of the more complex needs of today's land rigs: AC Drive rigs that are capable of quickly moving from well to well at a drilling site. The company currently has about 163 of these more advanced rigs ready and waiting for when a client comes calling, which is more than the entire AC Drive fleet of its second largest competitor.

With a large fleet of advanced rigs ready to pounce on market share and a splendid balance sheet, there are few companies out there that are in a better position for when the U.S. oil market rebounds than Helmerich & Payne.

Matt DiLallo: For the past several years EOG Resources (NYSE:EOG) had been the fastest growing horizontal oil producer among the larger independent oil companies. This was due to the fact that its production had been growing by a remarkable rate, averaging over 30% per year.

However, that growth came when oil prices were in the triple digits. Now that prices are about half of what they were, EOG Resources "has no interest in accelerating oil production at the bottom of the commodity cycle", according to comments it made in its first-quarter earnings release.

That said, the company is preparing for a recovery, which is why it has been drilling -- but not completing -- hundreds of wells. Once oil prices recover and stabilize above $65 per barrel the company is ready to open up the floodgates and resume "strong double-digit oil growth."

That's because, as the slide below shows, it can create so much more value by drilling when oil prices are higher. EOG Resources has some of the best horizontal oil assets in the industry. Its well costs are also very competitive, which is why it could profitably drill for oil even at prices less than $40 per barrel. However, it has chosen to hold back until prices improve so that it can get the most value out of its assets. That's why I see it really set to soar when the recovery takes hold.