Please ensure Javascript is enabled for purposes of website accessibility
Log In Help Join The Motley Fool
Free Article Join Over 1 Million Premium Members And Get More In-Depth Stock Guidance and Research
By Brian Feroldi - May 17, 2015 at 9:04AM

9 years ago Pfizer tried to launch an inhaled insulin called Exubera to the market and it failed. Here are 4 reasons why Afrezza could succeed where Pfizer came up short.

Long-time MannKind (MNKD 4.46%) bears have been yelling for years that inhaled insulin is simply a losing idea. After all, healthcare giant Pfizer (PFE -0.23%) tried to launch the world's first inhaled insulin, Exubera, almost 9 years ago, and ended up pulling the plug in less than a year after disappointing sales.

Ever since Pfizer made that decision, many other diabetes giants have followed suit. Novo Nordisk (NVO 0.19%) and Eli Lilly and Co. (LLY 0.15%) had both previously worked on developing their own inhaled insulins, but they both abandoned the projects, as neither company believed that inhaled insulin held enough commercial potential. At this point, only MannKind has been left standing, and they've succeeded in launching Afrezza to the market.

While it's true that Afrezza may ultimately end up being a market failure as well, the drug does have several key advantages going for it that Exubera did not. Lets explore the reasons that Afrezza could succeed where Exubera failed.

1) Afrezza is much smaller

One of the "big" reasons why Exubera was a market failure was that the device itself was simply huge. At almost 10 inches tall, it was simply too big for patients to comfortably carry. In fact, because of its size and shape Exubera quickly developed a nickname in the diabetes community as the "insulin-bong". Not exactly the name you want associated with your product.

By comparison, Afrezza easily fits in the palm of the patients hand, and can be taken much more discreetly. This alone may make patients much more willing to give Afrezza a try.

2) Dosing is easier to calculate
Another downside to Exubera was that dosing was non-linear, which made figuring out how to dose yourself very confusing. Exubera "blisters" came in two sizes: 1 mg and 3 mg. The 1 mg blister was equivalent to about 3 units of insulin, but the 3 mg blister was equivalent to 8 units. Thus, it could quickly become confusing as to what combination of blisters you needed to inhale if you wanted to take, say, 17 units.

By comparison, Afrezza dosing is more straightforward, as it currently comes in two sizes: 4 and 8 units. While this still may bit a bit more confusing than simply using an insulin pen, it's not as difficult as using Exubera. In addition, the company is working on additional sizes to make it easier for patients who need smaller or larger doses. 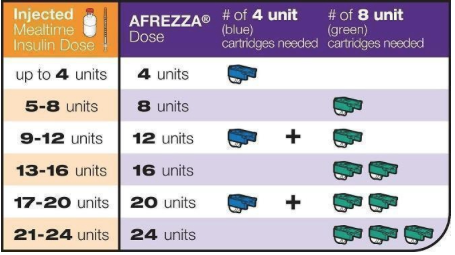 3) Founder-led management team
One of the big reasons that there is still a die-hard investor base that believes in MannKind is because of the direct involvement of billionaire investor and 38% shareholder Alfred E. Mann. Mann, the founder, namesake, and current Executive Chairman of MannKind, is a truly extraordinary entrepreneur, having founded and funded 14 different companies in his career. Nine of those companies were subsequently acquired by other companies, allowing investors to cash in on almost $8 billion in value creation.

Mann has a long history in starting companies that focus on developing diabetes treatments, including founding MiniMed which was later acquired by Medtronic. Having a successful, knowledgeable, and deep-pocketed investor on your side can be a wonderful asset. Although Mann recently stepped down from his role as MannKind CEO, he remains an important part of the company's leadership team.

4) MannKind is all in
While MannKind has hinted that it is interested in using its proprietary Technoshere technology to develop other drugs, the near-term future of this company is directly tied to Afrezza's market success. In addition, the company has smartly aligned itself with diabetes giant Sanofi (SNY 1.96%) for marketing, thus leveraging Sanofi's army of well-connected sales representatives that specialize in the diabetes space. You can bet that MannKind won't throw in the towel on Afrezza anytime soon, as it needs to hit certain milestones to be eligible to collect additional payments from Sanofi.

But it's no slam dunk
MannKind recently reported first quarter results, and the market was not impressed with what it saw. The stock is down 30% in the last month alone, as Sanofi reported that Afrezza sales only hit roughly $1 million during the quarter.

MannKind's management team indicated on its most recent earnings call that a major reason that initial adoption has been slow is that the FDA requires patients to get a lung function test before they can begin treatment. Management estimated that only about 30% of endocrinologist offices have the testing equipment in-house to do so. This means that patients have needed to make additional appointments before they can get started on Afrezza, delaying the process by weeks, if not months.

MannKind is actively working to address this issue, and the company has identified an inexpensive spirometer, which is the device needed to perform the prerequisite lung tests, that they can recommend physician offices purchase. If MannKind can get physicians to follow along with this purchase suggestion, this could ease this burden of starting treatment and help to speed adoption. Management did note that the cost of the meter can be offset by charging just a single patient for one test, which provides physicians with a very high return on investment.

Will Afrezza succeed where Exubera could not? It's still far too early to tell, but if inhaled insulin is ever going to gain mass market adoption, Afrezza has the best chance we've seen so far of making it happen.