Gilead Sciences (NASDAQ:GILD) is a top dog when it comes to developing treatments for infectious diseases. The company's single-table regimen drugs for HIV, for example, have come to dominate the market in both the U.S. and EU: 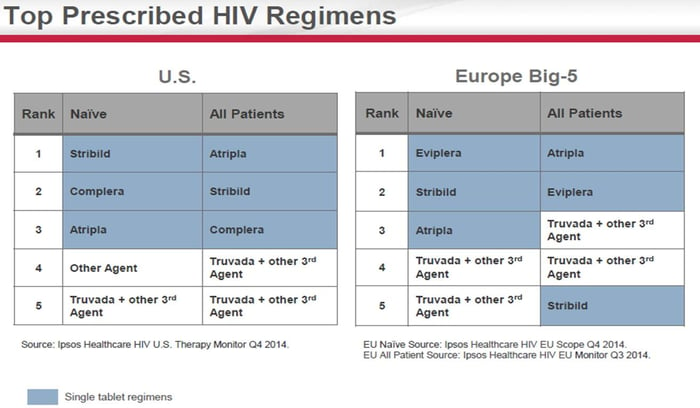 On the hepatitis C front, Gilead estimates that it presently controls around 90% of the market with Sovaldi and Harvoni, crushing its closest competitors from AbbVie (NYSE:ABBV) and Bristol-Myers Squibb (NYSE:BMY).

Because of the stunning success of Gilead's latest infectious disease medicines, the biotech's operating cash flows have flown higher in the past 12 months: 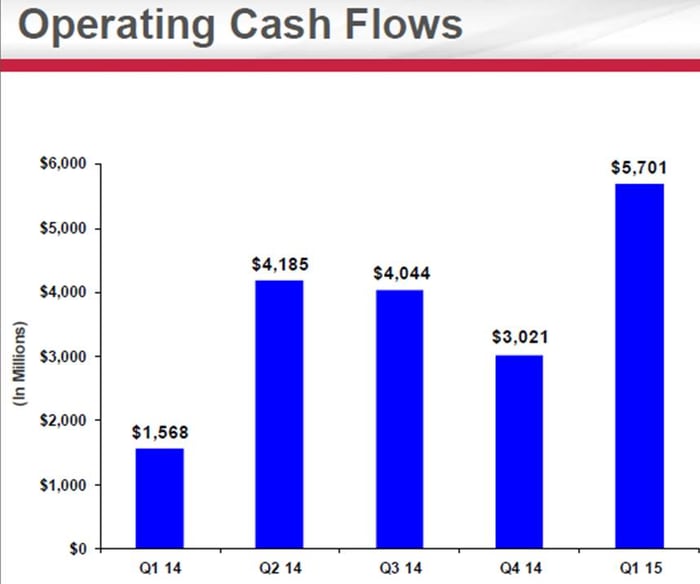 Gilead has therefore been able to reward shareholders via a massive $15 billion share buyback program, and through a quarterly dividend payment that is set to start being doled out in the second quarter of this year.

The company's share price has nevertheless lagged behind the biotech sector in general: 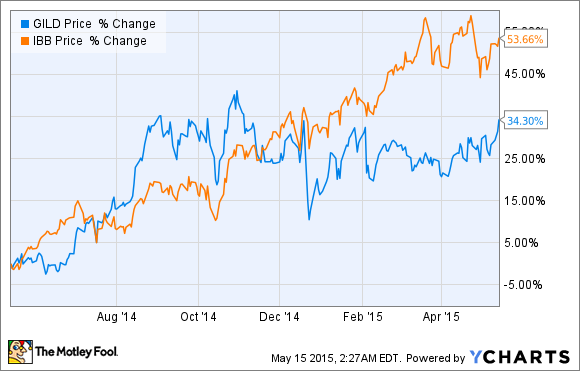 The most confusing aspect about the performance of Gilead's share price, though, has been the fact that the market has basically snubbed the company's earnings in favor of its closest peers, such as Biogen (NASDAQ:BIIB) and Celgene (NASDAQ:CELG): 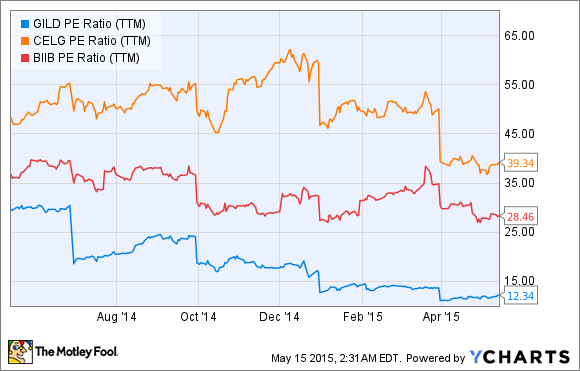 Over the last year, the chart above shows that the market has been willing to pay more than double the amount for Biogen and Celgene's earnings, compared to Gilead's.

If this sounds irrational and looks like the market is "getting it wrong" when it comes to Gilead, I have some disappointing news for you.

Gilead's science is so good that it's actually destroying the company's business
Pharma companies, like most other businesses, make the bulk of their money through repeat business. Gilead, however, is doing something really no other drugmaker is doing -- namely curing patients of devastating infectious diseases.

The biotech's hepatitis C treatments are basically functional cures for over 90% of patients that take them. As a result, there is a real chance the market for these drugs could crater within the next five to 10 years, especially in Western countries, where background levels of hep C infections have been declining ever since blood screening procedures were implemented in the 1990s.

Making matters worse, Gilead is rapidly developing a new combo pill that could cut the average treatment duration in half. That's great news for patients and doctors battling the disease, but it also means that roughly half of Gilead's hep C revenues could evaporate in the not-so-distant future.

Now Gilead is going after a functional cure for HIV. According to a recent investor presentation, the company has initiated a small safety and proof-of-concept trial for GS-9620 as part of a so-called "Shock and Kill" viral eradication strategy for patients infected with HIV.

Similar approaches have so far been only partially effective, because these experimental drugs haven't been able to activate all HIV-carrying cells at one time. But Gilead's GS-9620 is an extremely potent immune activator, shown by its clinical trials as a potential treatment for hepatitis B.

In short, Gilead could be eating into a huge chunk of its core business within the next three years by curing HIV. Again, that would be amazing news for HIV patients, but it helps to show why the market doesn't value Gilead's earnings as highly as its peers.

What's next?
My take is that Gilead is starting to transition away from infectious diseases to focus on oncology. The company's recent acquisition of privately held EpiTherapeutics for its preclinical cancer drug candidates and its rapidly growing clinical program for various cancers look like tell-tell signs that Gilead is, in fact, becoming an oncology company.

Looking ahead, I believe Gilead will use its growing cash base of over of $14 billion to significantly bolster its footprint in cancer care. Such a move would force the market to reevaluate its outlook toward the biotech, and would therefore be a tremendous value-creating event for shareholders. Stay tuned!