Please ensure Javascript is enabled for purposes of website accessibility
Log In Help Join The Motley Fool
Free Article Join Over 1 Million Premium Members And Get More In-Depth Stock Guidance and Research
By Tyler Crowe – May 17, 2015 at 8:00AM

Energy companies have been a pretty big part of the Berkshire Hathaway portfolio for many years, and here's why Magellan Midstream Partners, Core Laboratories, and Helmerich & Payne deserve a spot in the family as well.

One of the more fun things to do in the investing world is to try to predict Warren Buffett's next move. After all, it can be pretty satisfying when possibly the most successful investor of all time does what you thought he would. While it's not easy predicting what Buffett will actually do to grow the portfolio at Berkshire Hathaway (BRK.A -1.25%) (BRK.B -1.31%), it's pretty clear what he is seeking.

So, following the Tao of Warren and looking for companies with strong competitive advantages and the ability to generate loads of free cash, here are three companies in the oil space that should tempt Buffett and almost any investor who follows his ethos today: Magellan Midstream Partners (MMP -0.52%), Core Laboratories (CLB -3.68%), and Helmerich & Payne (HP -3.51%).

Magellan Midstream Partners: Is there anything that seems right up Warren Buffett's alley more than a company that generates over 85% of its revenue from fixed-fee contracts, and a large portion of that revenue is also regulated because it has a near-monopoly on the service it provides? That is a pretty accurate description of Magellan Midstream's business. Its network of refined petroleum products pipelines is the nation's largest, and in some places it is the only provider of gasoline and diesel around. This makes Magellan's pipeline system a cash-generating machine that management has used shrewdly to pursue acquisitions to expand into other critical infrastructure projects such as oil and gas terminals and crude oil pipelines, or to find organic growth from its existing network in both petroleum products and crude.

What really puts Magellan over the top as an oil stock for Berkshire Hathaway is the company's conservative capital allocation over the past several years. Magellan management has maintained a modest debt-to-EBITDA ratio for a master limited partnership, along with an investment-grade credit rating, all while throwing off tons of cash to investors with a distribution that has grown 12% annually since 2001. With a simple corporate structure that lacks a general partner, unlike other master limited partnerships, the question isn't whether Berkshire Hathaway should buy this company but why it has not already done so.

Core Laboratories: Buffett has largely eschewed companies that rely on technology for their competitive advantage, but Core has proven for years on end that it can sustain that advantage in the oil and gas space while generating loads of free cash flow and an unparalleled return on capital. In fact, the company's return on capital employed is more than double the second-best company in the oil services sector and is up there with the best companies in almost any industry. 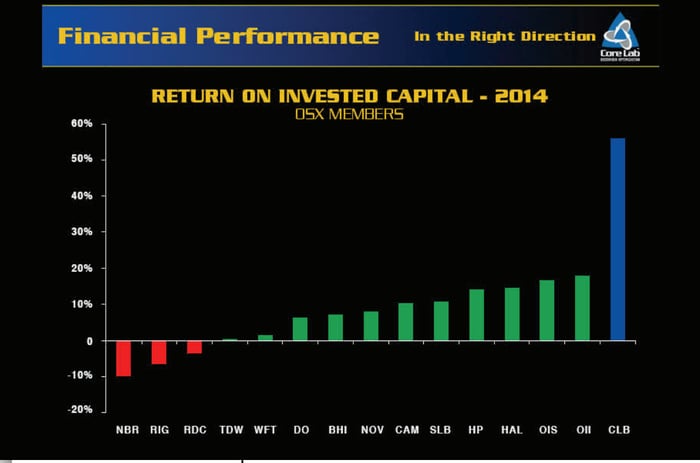 Over the past dozen years or so, Core Labs management has returned almost all of that free cash flow to shareholders. Not only does the company pay a decent dividend that yields 1.68% today, but management has reduced its total share count by close to one-third since 2003 through stock repurchases. The company is a little smaller than most of the other companies in the Berkshire portfolio and might not move the needle as much for a conglomerate of that size, but it certainly has the credentials.

Helmerich & Payne: With horizontal drilling playing an increasing role in the U.S. energy landscape, producers are demanding rigs that have the horsepower to drill longer and longer laterals and the ability to quickly move to the next well. Of all the companies that own and lease rigs, Helmerich & Payne has been one of the best at updating its fleet with rigs that are capable of pad drilling -- drilling multiple horizontal wells from a single location. Even more astounding, the company accomplished a massive turnover of its fleet without taking on high levels of debt.

Now Helmerich & Payne has the largest fleets of pad-capable rigs and a squeaky-clean balance sheet that allows the company to generate some of the best returns on capital invested in the oil services space. This means the company can throw off a generous 3.5% dividend yield and still have cash left over that will help it maintain its lead over the competition with a modern, well-maintained fleet. With an $8 billion market capitalization, this isn't exactly a company for which Berkshire would need to swing for the fences, but it could be another strong cash generator to fund that precious float.

What a Fool believes
Aside from the employees at Berkshire Hathaway, nobody knows if these companies are on Warren Buffett's radar -- although considering the number of annual reports he reads I'm sure he has at least looked at them once or twice. With strong competitive advantages in their respective fields, clean balance sheets, and a solid history of generating cash flow that is returned to shareholders, though, these companies are right in the Berkshire Hathaway wheelhouse and are worthy of consideration for investors' own portfolios as well.

Tyler Crowe owns shares of Berkshire Hathaway, Core Laboratories, and Magellan Midstream Partners. You can follow him at Fool.com under the handle TMFDirtyBird, on Google+, or on Twitter @TylerCroweFool.